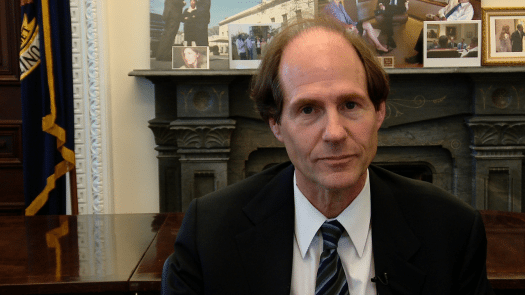 Former Obama official Cass Sunstein explains in a recent article what a “wing nut” is: anyone, right or left, with “a dogmatic commitment to an extreme political view” that is “false and at least a bit crazy.” Wing-nuts, he says, “impugn” the “motivations” or the “good faith” of people with whom they disagree, rather than confront their actual arguments.

Sure, you may say, that’s fair: an equal- opportunity definition of “wing nut.” Who wouldn’t want to join Sunstein in occupying the moderate middle and calling out the intolerant and the uninformed at both ends of the political spectrum, the people, as he says, who call Barack Obama a socialist or George W. Bush a fascist?

The question, though, is how does Sunstein use this even-handed rhetorical stand against “wing nuts”?

To know, we don’t have to look any further than Sunstein’s third example of a wing nut: someone who believes “that big banks run the Department of the Treasury.” Now, it’s not clear exactly what Sunstein means in suggesting it’s “false and at least a bit crazy” to say that big banks “run” the Treasury. Does he just mean big bankers don’t literally occupy all the top positions in the department? That they don’t succeed in controlling every action by the Treasury? Sunstein also doesn’t explain why he arbitrarily limits the focus to the Treasury, in particular. Why not include Congress? Or the Federal Reserve?

If we assume that Sunstein isn’t deliberately quibbling or choosing words disingenuously, it would seem that his message is this: If you think that big banks have a corrupting hold on regulatory power, a disproportionate, destructive influence over what the federal government does, you’re a “wing nut.”

Sunstein does not say much about why it’s nutty to hold this belief, which is odd, because you might think it has at least surface plausibility. At crucial junctures of recent American history, the only sacrosanct interest, it seems, has been the interest of big banks. Take, for example, the major pieces of legislation passed by Congress to respond to the financial crisis: the bank bailout, the stimulus, and financial reform. Only the bailout had support from the leadership of both parties. It was the one policy, in other words, that leaders could agree was absolutely essential.  What about stimulating demand by putting money in the pockets of the poor and middle class? Please, don’t make me laugh.

Or consider this nugget from last week’s New York Times, about the influence Citigroup had on a bill approved by the House Financial Services Committee that would “exempt broad swathes of [securities] trades from new regulation”:

“In a sign of Wall Street’s resurgent influence in Washington,” the Times notes, “Citigroup’s recommendations were reflected in more than 70 lines of the House committee’s 85-line bill. Two crucial paragraphs, prepared by Citigroup in conjunction with other Wall Street banks, were copied nearly word for word. (Lawmakers changed two words to make them plural.)”

I hope Sunstein doesn’t want to rest all his ridicule on those plurals. Or the fact that Congress isn’t the Treasury. Or that the Treasury, under Jack Lew, opposed this particular bill. After all, the Treasury Secretary while Sunstein worked for Obama, Timothy Geithner, was reputedly once offered the job of chief executive of Citigroup. Geithner has also been roundly criticized for doggedly protecting Citigroup, a big recipient of bailout funds, when he was Secretary. And Geithner’s former boss in the Clinton Treasury department was Robert Rubin, who was chairman of Citigroup. Oddly, none of this is in Sunstein’s article.

Sunstein, remember, says that when they come into contact with views they dislike, wing nuts put aside the actual substance of those views and “impugn” those who hold them. So it’s interesting that when Sunstein is confronted with a view he apparently finds simplistic or offensive he impugns those who hold it as “wing nuts” and refuses to explore the relevant factual evidence.

Am I calling out Sunstein for hypocrisy, then? No, that’s too obvious. What’s at issue is something more subterranean and sometimes more dangerous. Writers position themselves rhetorically as moderates for lots of reasons. One unstated purpose in Sunstein’s piece is to marginalize a viewpoint he finds irritating without the bother of actually refuting it. Sunstein unwittingly reveals what is all too often the secret of opinion-page moderation. Whatever else it accomplishes, it polices the bounds of acceptable political discourse. And all too frequently it does this on behalf of the sort of people who grimace when others suggest that banks have far too much political power.

Related Topics:Wall Street bailout
Up Next