Richard Kirsch has dedicated his life to fighting for universal affordable healthcare. A senior fellow at the Roosevelt Institute and author of numerous studies on healthcare reform, Kirsch wrote New York’s Managed Care Consumer Bill of Rights. Perhaps most notable, however, is the role he played in transforming the recent political discourse with his revolutionary proposal: the public option.

In his new book, Fighting for Our Health: The Epic Battle to Make Health Care a Right in the United States, Kirsch describes the uphill struggle to bring health care to everyone. The book doubles as a memoir and ode to the power of progressive grassroots organizations. He chronicles the history of health care reform as well as his own experience designing and pushing forward the public option — a middle road between private insurance and single-payer coverage.

At a book party and fundraiser at the California Endowment, Frying Pan News spoke with Kirsch about the long and turbulent history of health care campaigns, and the future prospects of universal, affordable care.

Frying Pan News: Tell us about your book.

Richard Kirsch: It’s a story of the largest progressive issue campaign that was ever run in the country…. The book is the story of an insight I had that in order to unite the divisions that progressives had between single payer national health reform and private insurance, we needed a compromise that would appeal to people and also unite progressives. That’s where I came up with the idea of a public health insurance plan. It’s my story as the person who led a lot of the work, led the process of instigating and forming this coalition, led the organizing process and then was asked to be the campaign manager.

FPN: What was your goal in writing this book?

RK: I wanted people to understand a strategy for how big campaigns go about 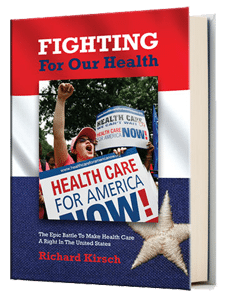 making change. But not in an academic way — not by saying these are the ingredients — but more by showing, and by example of these very inspiring stories of how we organize.

FPN: What was it like making the decision between pushing for a single-payer system and a public option?

RK: I was a leader for single payer in the last go around… and I’m actually very proud of the fact that there is only one legislative body in the country [New York] that passed a fully financed single payer proposal. So I was totally for single payer. In 2003 I wrote an article called “Will It Be Déjà vu All Over Again?” The point of that piece was I wanted to tell people who were starting again to fight for universal health care what we had learned in the ‘’90s. But I found much to my surprise when I was writing the article that I actually came up with a proposal.

The proposal came from the insight that when we go from problem to solution, the whole dynamic of health care changes. Everybody is affected by the problems of health care and they say they want change, but when you get to a solution, that presents a problem because…health care is incredibly personal and so people get very worried that changes will hurt them.

I realized we needed to come up with a proposal that had as little change as possible but that would still meet our policy guidelines…. Single payer would mean that everybody would have to give up their insurance for government insurance. And it really would be a government takeover of the healthcare insurance system, and it would be a total loser. It would scare the pants off of people! And that is, in effect, why not single payer.

FPN: People seem very ignorant about the nuances of health care and how exactly it affects them. Is there anything you think we can do to clarify the discourse because health care is something that affects everyone so personally?

RK: Unfortunately, we aren’t going to really clarify it until 2014 when the law takes effect. The main thing the law was intended to do is not so much to fix the current insurance system in terms of health insurance, although it does improve it, but to deal with the fact that there are 50 million people without insurance, — if you lose your job you can’t get health care.All the things that people want most from it isn’t going to change, and people barely pay attention to what is going on in the world, it’s really hard to explain to them about change, and it’s hard to imagine change until they live it. Support for the law is slowly picking up,..but until we get to 2014 and this kicks in, people aren’t going to understand it.

On the other hand, look what’s going on in Massachusetts. It’s very, very popular. They were smart there, they didn’t wait, and as a result it’s very popular and it’s not controversial. People love it!

FPN: Why do you think we as a nation have been struggling with this for so long – is there something intrinsic about the way that we are set up as a country that makes the health care problem so acutely challenging?

RK: Yes. I think it fundamentally has to do with the culture. People came here for different versions of freedom and opportunity and created a whole ethos of “I came here. I’m going to make it on my own.” And that ‘make it on your own’ philosophy is deeply engrained…. Our country, much more so than any other country in the world, has a much more individual as opposed to collective ethos. So when you say that we are going to do things based on a fundamental sense of social solidarity, that we’re all in this together, that I am my brother’s keeper — that is in conflict with ‘you’re on your own.’ Capitalism thrives on the individual over the collective, and so if you look at the history of health care…all the arguments against it are always based on socialism.

FPN: How do you feel about the June 28 Supreme Court decision upholding most of the Affordable Care Act?

RK: It was a huge relief because it should never have been an issue. When you look at the settled law and precedents, the idea that there was a serious constitutional challenge is nuts! But it shows just how polarized and extreme the right wing is. And in fact when you look at the decision it’s really frightening because the four conservative justices wanted to throw out the entire law, which is totally outside the mandate of precedent…. There are two hurtles that we have to get over: the first is the Supreme Court, the other is the presidential election. So I’m not exhaling yet.

What Were They Smoking?