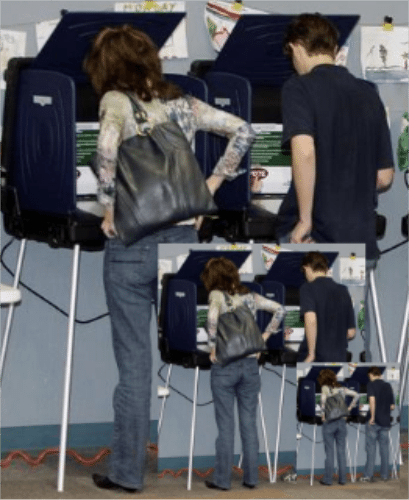 A troubling trend has spread throughout the United States: people have stopped voting in local elections. This has even occurred in hotly contested races with candidates generating national media coverage, as in New York City’s September primary that included Elliot Spitzer and Anthony Weiner. Despite their presence and strong mayoral candidates from the city’s leading constituencies, voter turnout was only 20 percent (22 percent among Democrats). The last time NYC voted for mayor without an incumbent on the ballot, in 2001, the Democratic primary turnout was 30 percent, despite a less competitive field. Los Angeles’ heavily contested March 2013 mayoral primary election—which, as in NYC, offered voters the chance to elect the city’s first female mayor— had only a 15 percent turnout. This rose only to 23 percent in the May runoff, when Eric Garcetti won the mayor’s race with fewer votes than any newly elected mayor since the 1930s.

This decline in local election voting can be found throughout the nation. It conflicts with the popular belief that people have turned to local politics in response to Beltway obstructionism. While many believe local politics more directly impact voters’ lives and that local governments act as incubators for national policies, the percentage of those voting in local elections steadily shrinks. Here is my assessment of the causes of this trend and a potential solution.

On November 5, San Francisco voters will decide two hotly contested ballot measures on a housing development known as 8 Washington. Yet only 50,000 votes may be cast on Props B and C, half that of the November 2009 election. That low 22 percent turnout in the same election cycle four years ago was explained by the lack of contested ballot measures and candidate races; yet that turnout could double what we see next week.

When San Francisco Mayor Ed Lee won with a 42 percent voter turnout in the 2011 mayoral election, the SF Chronicle’s Matier & Ross explained that “boring candidates and lackluster campaigns equal low turnout, no matter what the system.” But as I pointed out at the time, (“San Francisco Low Voter Turnout Reflects National Trends”) the decline in voter turnout transcends particular campaigns. If a NYC’s mayor’s race featuring Bill de Blasio’s remarkable rise, a frontrunner on track to become the city’s first woman and lesbian mayor and the national attention of Anthony Wiener’s sexting cannot get more than 20 percent of the voters to the polls, something is seriously amiss.

Here are the factors behind this local voting decline.

The Decline of Local Newspapers

As I point out in my new book, The Activist’s Handbook, Second Edition: Winning Social Change in the 21st Century, the days when the local newspaper’s headlines dictated the city’s television and radio coverage are past. While this is positive for progressive activism—whose issues were often kept out of the public spotlight by the news gatekeeper function of the dominant local newspaper—it has meant that voters are less informed on local issues.

Consider the shift in San Francisco. Until the rise of the Internet, the city had two daily newspapers and a third—-once the Progress and then the Independent—that covered City Hall and neighborhood news, and was delivered free across the city two to three times a week. The city also had two well-funded alternative weeklies and multiple neighborhood newspapers that connected readers to local news and politics.

Today, San Francisco has a far-scaled down SF Chronicle, a free, tabloid Examiner that is a fraction of its size under the Hearst ownership and two recently sold alternative weeklies whose circulation is nowhere near the pre-Internet days. Some neighborhood papers continue, but their combined circulation does not come close to where it was in the 1990s and before.

San Francisco’s declining newspaper readership has left voters disconnected from local news, which is reflected in lower voter turnout in local elections. And the problem is worsened by the rise of the Internet.

While declining newspaper readership reduces voters’ connection to local news, the Internet redirects voter interest to campaigns outside their home districts. I note in my book how a site like DailyKos.com connects people to congressional races in other states. It is now just as easy for people to donate time and money to favored candidates and campaigns in another state as it is in one’s home city. It is even common for people to go to other states to work on key campaigns, something that was almost unheard of prior to the Internet.

Recall Wendy Davis’ recent abortion rights filibuster in Texas. I would bet more San Francisco voters watched Davis’ action on YouTube or another online source than will vote in the November 6 election.

Can you think of a city issue that leads people to YouTube? Anthony Weiner’s text messages and press conferences certainly did, yet 80 percent of NYC voters still didn’t vote (and the sex scandal-impacted Spitzer was also on the ballot)

Twitter also shifts voter interest away from local politics. National issues are tweeted far more often and one of Twitter’s attractions is the ability it gives for people around the country to connect to what national figures are saying.

The Rise of Cable/Satellite Television

KQED once had a nightly television news show called Newsroom. Moderated by Rollin Post, its panelists —-a very young Phil Bronstein (who would go on to run the Examiner, Chronicle and now the Center for Investigative Reporting), African-American journalist pioneer, Belva Davis and Spencer Michels —discussed the local news events of the day.

Newsroom engaged people in local politics, but fell victim to declining interest. A version of the show, Evening Edition, went off the air in 1979 because, as Michels said in a recent interview, “too few people watched.”

Few nightly shows in any city discuss local news. Yet there are dozens on FOX, MSNBC and other news outlets focused on national and international news. These shows engage voters in national policy fights, making local issues seem almost irrelevant.

It’s been said that young voters are more likely to get their news from Jon Stewart (The Daily Show) or Stephen Colbert (The Colbert Report) than from a daily newspaper. Both shows focus on national issues.

Cities that hold local election primaries could either coincide them with state and national elections and then hold separate runoffs, or they could turn to ranked choice voting systems that eliminate runoffs. While any change to traditional election cycles will arouse opposition, holding low turnout elections should be considered unacceptable.

Democrats and progressives are justifiably angry over Republican-passed voter suppression laws in many states. But holding local elections ignored by the vast majority of eligible voters also weakens democracy, which is what is occurring in heavily Democratic cities and elsewhere.

It’s time to end the de facto voter suppression caused by local election cycles that most voters ignore. Ballot initiatives–put up for vote during state and national election cycles–should be used to put an end to this once worthy but now undemocratic political process.