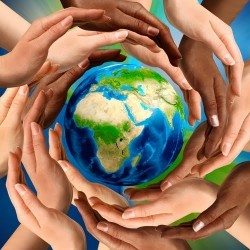 “Give and it shall be given unto you is still the truth about life.”

D.H. Lawrence said that almost a century ago. Now we can read scientific evidence that this statement is true. How much we have or how much we earn does not make us happy. How we spend what we have is what makes us happy and the more that spending connects us to other human beings, the happier we are. Giving – to another person or through a charitable organization – is the deepest connection we can make.

While the conclusions of Happy Money, a book by research academics Elizabeth Dunn and Michael Norton, demonstrate that happiness and giving are closely connected, they also indicate that giving boosts our odds of living longer and healthier. Furthermore, the authors say, when a man in an experimental situation gave more to someone needy, his “handsome” quotient increased – women in the focus group rated him higher!

By that standard, Americans and their institutions are not very happy. In 2011 the richest 20 percent of Americans gave only 1.3 percent of their incomes, while the bottom 20 percent gave 3.2. The richest gave to higher education and the arts, while the poorest gave to religious and social service organizations. Why the disparity? Lower income people give more to direct services because they are more familiar with the challenges of meeting basic human needs.

Corporate giving was higher in 2012 (still not at the peak year of 2007), but much of it was in surplus goods and in-kind products (like pharmaceuticals). Altogether, corporate giving amounts to just six percent of total charity – dwarfed by the contributions of individuals. For example, in Los Angeles only five of the top 100 companies headquartered here get involved in formal philanthropy.

Meanwhile, the economic indicators don’t measure giving. Economists worry about the amount of purchases on Black Friday. They eagerly await the total sales on Cyber Monday. They monitor every indicator of the holiday season to determine the status of the gross national product. But what people give away doesn’t get counted as part of the health of our economy.

I have long thought that every person has a gift — there is something we have to contribute to the human community, whether or not it amounts to a lot of money. One Anglo friend of mine knows how to make an authentic medieval coat of mail or set of armor, but unfortunately for him there is not a big demand these days for either. Another friend, an African-American guy, plays a great Irish fiddle. He also makes clothes. But he only gets to use those gifts when the Renaissance Faire hires him for one of its periodic events. Both men have wonderful gifts, but neither have the opportunity to give them often. And no economist counts them.

Lost Angels, a recent documentary film about homelessness in Los Angeles, follows several people who live on our streets. These moving stories show people, even people without a place to live, people with nothing, helping their community. One guy recruits and coordinates a crew of street people who sweep the gutters and sidewalks every morning. Another woman seeks out and feeds the feral cats that live in her neighborhood. These people have suffered terrible calamities in their lives, but have survived and give something of themselves to their community that makes it a better place to live. None of the people featured in Lost Angels get counted by the experts who keep track of the economy.

But sociologists who study community-building know that a healthy place to live is one in which every single person gives their gift. Giving makes the neighborhood stronger. The persons who share live healthier lives. The interactions make the area a better place to live for everyone. That’s the reciprocal nature of giving. You give your gift, I give my gift, together we are able to get through tough times much better. D.H. Lawrence was right.

Related Topics:Black Friday
Up Next

Why I Support the Social Workers Strike