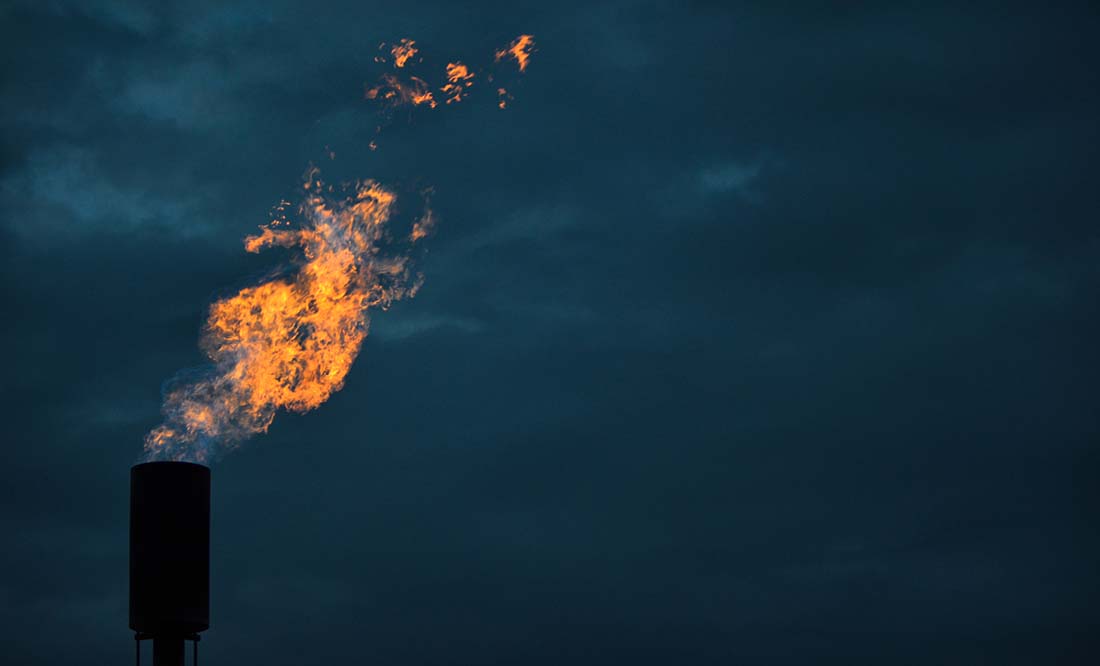 The state of New Mexico found itself ahead of the curve on a national issue when the U.S. Environmental Protection Agency announced its plans on Tuesday to implement new, more restrictive methane rules for oil and gas operators across the country sometime next year.

The state is in the middle of implementing its own, more thorough methane rules, which were written into law this past March. Regular venting and flaring of natural gas is already banned, and operators are currently logging leaks on a well-by-well basis. That tally will set the baseline by which all emissions are to be reduced by 98% by 2026.

The state’s rules are the background message for New Mexico Gov. Michelle Lujan Grisham, as she talks up the state’s climate efforts at greenhouse gas reductions and green energy technologies at COP26, the United Nations’ global climate change conference being held in Glasgow, Scotland.

“We want the federal government to adopt the same standards that we have in New Mexico,” she said in an interview on the sidelines of the conference. “And we have certainly been laying that foundation.”

New Mexico has an outsized role to play in the U.S. response to climate change, as the state is the second-largest producer of oil and among the top-10 producers of natural gas in the country. In addition, more than 50% of the state’s greenhouse gas emissions come from the oil and gas sector. But the state still faces multiple challenges in tamping down emissions: The rules have a five-year implementation period, and state agencies are still figuring out how to conduct widespread inspections and enforce them. Moreover, as oil and gas production continues to increase, emissions increase as well. These problems will likely plague the nation as a whole, as the EPA tries to wrangle its rules into place.

Methane is a potent greenhouse gas contributor, trapping roughly 80 times more heat than carbon dioxide does over its first 20 years in the atmosphere.

A survey of state production statistics and satellite records of methane emissions reflects the scope of the problem. They show recent dramatic increases in production of both oil and gas, as well as increasing atmospheric methane — a symptom of leaking petroleum operations. And in spite of the new methane rules, the state’s overall oil and gas production numbers are increasing and are primed to increase further yet.

In Lea and Eddy counties, covering most of New Mexico’s share of the Permian Basin, oil and gas production are at their highest levels ever. In fact, when looking at annual totals, production increased even as oil prices tanked during the global economic shutdown in 2020 due to the COVID-19 pandemic.

But that production comes with a sharp rise in methane.

Atmospheric scans of the Permian Basin by a trio of Earth-monitoring satellites show a sharp rise in the amount of methane across that region that parallels the rise in petroleum production.

The gas, which often leaks from wells and pipelines, is a potent greenhouse gas contributor, trapping roughly 80 times more heat than carbon dioxide does over its first 20 years in the atmosphere.

In addition, recent pinpoint data from the Environmental Defense Fund reflects this uptick in methane. This fall it conducted airborne scans of individual oil and gas sites across the Permian Basin, showing widespread leaks and venting from both major installations and smaller well sites.

Nationally, the number of well drilling rigs has dropped from just under 1,100 in late-2018 to just under 550 now. However, in New Mexico, the rig count has stayed stronger in that period, dropping from a high of 114 in March 2020 to 86 now. For more than two years, only Texas has had more. It’s an indication that producers have slowed operations in other states to focus new production on the Permian Basin.

Furthermore, the U.S. Bureau of Land Management resumed oil and gas lease auctions following a pause invoked by the Biden administration at the start of the year as it reviewed federal leasing policy. The pause was struck down by a Louisiana judge in June, and now, roughly 520 acres of leases are up for auction on New Mexico’s side of the Permian Basin.

In addition, in October, the New Mexico State Land Office auctioned off eight oil and gas leases covering 1,320 acres in Lea and Eddy counties. This month it will auction off nine more covering 2,476 acres.

These numbers at both the state and federal levels don’t include thousands of leases already sold and awaiting drilling.

Jon Goldstein, senior director, regulatory and legislative affairs, at the Environmental Defense Fund, says, “Now that production and activity in the Permian is increasing — again — to historic levels, we are seeing emissions return to problematic levels as well.”

Goldstein says that while New Mexico is, in many ways, ahead of the EPA in creating and implementing methane regulations, two issues remain. One is with New Mexico’s partner in the Permian. “The emission doesn’t stop at the state line,” he says. So while the state rules are important, “Folks are going to continue to get impacted from those wells just across the line in Texas.” That’s one way the proposed EPA rules are still important to New Mexicans, even if New Mexico already has its own rules.

The industry’s oil and gas wells also leak other unhealthy gasses, known as ozone precursors. These chemicals create ground-level ozone, a known health hazard, especially for children and the elderly.

“The emission doesn’t stop at the state line. Folks are going to continue to get impacted from those wells just across the line in Texas.”

“Asthma, pulmonary disease, COPD exacerbation, any number of issues … look no further than where people are living close to the oil and gas industry,” Gov. Lujan Grisham said at COP26. “It’s an outrageous set of circumstances that call for immediate action. We have a moral obligation to completely upend that situation.”

The state Environment Department has a separate set of rules awaiting final approval early next year that would curtail those emissions and have a knock on effect of further curtailing methane leaks from oil and gas production as well.

Meanwhile, the Oil Conservation Division (OCD) is collecting well monitoring reports from operators across the state in its role as the pointy end of the spear in the state’s fight against methane leaks in oilfield equipment.

That began in October, and the first report on those numbers will come out in February. Baseline emissions will be set following a second report in May.

OCD Director Adrienne Sandoval explains that “once the baseline is set, operators will have to meet increasing gas capture percentages year after year” until the 98% reduction in 2026.

In a fluke of fate, operators are measuring their leaks and setting the baseline during a record high production period, which could lead to a larger allowed 2% than might have happened if the measuring had taken place during a bust period.

EPA’s proposal is eclipsed by New Mexico’s rules, which ban both routine venting and flaring and include regular inspections at smaller, leak-prone wells.

Tom Singer, a senior policy adviser with the Western Environmental Law Center, was on the state’s Methane Advisory Panel that helped develop both the OCD and NMED rules in 2019, along with representatives from the petroleum industry.

“It was a crapshoot,” he says of the dates the panel picked for the baseline monitoring. “There was just no way to forecast.” He jokes that “the ideal baseline would have been 2015,” in the midst of an oil and gas bust.

But Singer also points out that the state’s rules are “breaking new ground” in the extent of reporting required of operators, though that is tempered by the fact that they are self-reporting without third-party verification.

“I’m looking very carefully at who’s reporting what and seeing if there’s some way to verify that,” he says.

These loopholes and weak spots could prove educational to the EPA as it finalizes national rules. And even then, Goldstein at the EDF notes that what the EPA announced on Tuesday is eclipsed by the state’s rules, which ban both routine venting and flaring (the EPA proposal bans only venting) and include regular inspections at smaller, leak-prone wells.

He says that’s important because “we’re just gonna continue to ride this roller coaster unless we get strong requirements in place that ensure that we’re ramping down this emissions problem.”

And that emissions problem is why world leaders met at COP 26 in the first place.

Related Topics:COP26FeaturedMethaneoil and gas industry
Up Next