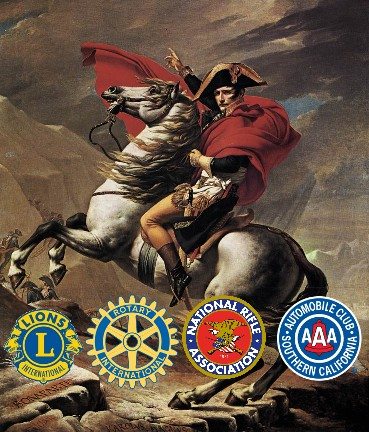 I don’t believe in empires. They don’t turn out well. They may last for a while – even a long while – but ultimately they collapse, and they don’t make most people’s lives much better in the process. Think Rome or the Ottoman Turks or the Spanish or the Brits. There are many reasons for the sad course of empires, but to me it’s about institutions.

We human beings organize themselves in one of two ways — as institutions or as associations. Institutions are usually big organizations that do big jobs where people get paid to do the work. Like governments and corporations. These institutions operate on protocols, make or sell lots of the same things, and need many customers or clients or constituents. Institutions run from the top down, which is why I think of them as triangles – the power of decision-making happens at the top, the rest of us follow the rules. Those characteristics can be benign or malevolent, but unless you are at the top, you take orders. an empire operates as a giant, all-pervasive institution.

American democracy sought to limit the absolute power of institutions to dominate every sphere of social life. Alexis de Tocqueville, the son of a French nobleman whose famed visit to America in the 1830s first described the American experiment, said the genius of this country was what he called its “associations.” He was astonished by the ability of ordinary folks to meet together voluntarily, define a problem, sort through various solutions, pick one and make it happen.

People unite in associations to address an issue or solve a problem or make something happen. These could be as organized and pervasive as the Lion’s Club or as casual and unique as a Thursday night pick-up soccer match. People participate in associations voluntarily, by their own free choice, and because they care passionately about an issue. I think of them as circles.

Of course, like institutions, associations can be good or bad. Think Catholic Workers feeding the hungry on Skid Row — or skinheads mugging a homeless guy. In both cases, these are voluntary organizations not controlled by institutions, although some we would like to encourage and others we want to discourage.

There are also hybrid organizations. Religions are voluntary, although they usually have paid staff and lots of rules. A charity may pay a staff, but no one can be forced to give to it. Likewise a union operates with paid organizers, but most workers vote on their memberships.

Together, associations and hybrids comprise “civil society.” The existence of this combined sector offers opportunities to act together outside of institutions and to put a check on their grasping power. So inevitably civil society disturbs institutions seeking to dominate the lives of individuals, neighborhoods, worshipers, workers, consumers and voters. Throughout American history, civil society movements have exposed the collusion between corporate and government institutions that, united, form the thrust of American empire and threaten the basis of participatory democracy.

In this season of giving thanks we can be grateful for another recently formed association – Occupy America. These people – living in tents in public spaces, mostly young – challenge the institutional collusion that threatens our ability to make the decisions that affect our lives and the future of our democracy. In fact, they may be the best thing standing between now and next November’s election because they’ve changed the dialogue and helped us see that it’s us at stake.

Say thank-you to an Occupier!