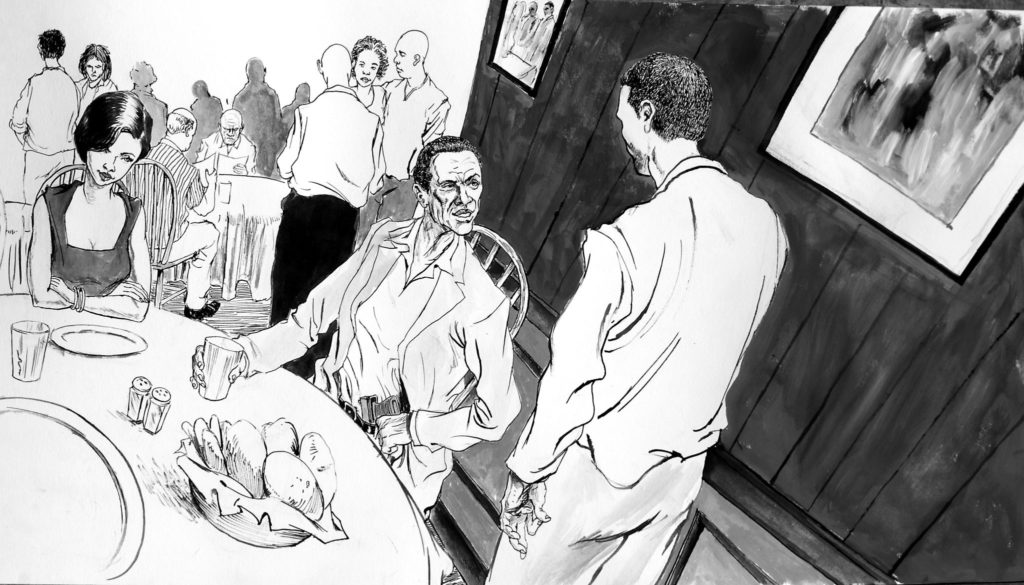 “Am I stutterin’, son?” the green-eyed pleasant-looking man with the perfect teeth said to the tall newcomer standing by his table. Around them the din of the eatery seemed to recede. “There’s no DeMarkus around here.” Like his displeasure, Teaflake made no effort to hide the butt of the Glock sticking out of his waistband.

The young woman sitting with Teaflake smiled understandingly, like she was ushering a patient in for a tooth extraction, Joseph “Little Joe” Dixon reflected.

“Didn’t mean nothing,” he said. “Heard you two was boys is all.”  He wasn’t about to back down but wasn’t looking to escalate matters either.

“Who are you?” Teaflake said, his voice low, his enunciation clear and concise, a sharp contrast to the way the usual street hoodlum swallowed vowels and ignored tenses.

Little Joe said, “I’m the new fitness director at Water Stones.” The multi-purpose center was Waterston but everybody called it by its mangled nickname. He’d learned that much.

A calculation went on behind Teaflake’s eyes and then he spoke. “You try Miss Doty?”

Teaflake gave him that smile and those teeth again—easy, no rush.

“Maybe you ought to find out.” Done with his uninvited visitor, Teaflake turned his muscled shoulders back toward the table and the pretty woman, his gun hidden again underneath the light stylish jacket he wore.

Little Joe exited El Faz Burrito on Broadway and took a deep breath. Inspecting his hand, he was pleased it wasn’t trembling.

“Sometimes you gotta stand beside yourself,” his Uncle Hank would say. “Get your mind around a situation before you let yourself get too heated.” Not that, Little Joe noted affectionately as he walked along, his uncle always followed his own advice.

“Wish I could go down there and knock some sense into them greedy pencil necks.”

Alma Gutierrez said, “That would just get you arrested, Hank.”

“Belle has to pay us to move from her profit,” Larry Wardlow contributed. He was a retired barber living mostly on Social Security. He made extra money driving a hearse part-time for a local mortuary. “It’s the law, isn’t it?”

“So what, Larry?” Dixon said. “The University’s got a platoon of lawyers who get their jollies screwing the little people.”  Weighing his options, he wondered if his nephew in Oakland might have room for him.  He’d lived in the Bay Area years before.

Gutierrez was consulting her smartphone. “Says here on the city site that all tenant not-at-fault evictions require payment of relocation assistance and the filing of a landlord declaration of intent to evict form with the Los Angeles Housing and Community Investment Department prior to evicting the tenant.”

She scrolled through the online passages. “Okay, here it is. Depending on how we’re classified, we can get ten to almost twenty thousand for relocation money.” She showed the two the screen.

Dixon smirked. “You can bet whatever way they can pay us the least, that’s how those mouthpieces will play us.”

The three stood around the compact courtyard in the rear of the Eden Arms. “We’re not going anywhere yet,” Gutierrez said. “Belle’s meeting with us tomorrow.”

As an answer Gutierrez pointed toward a second story window. This was the bedroom of the building’s owner, Grace O’Bannon. Lowering her voice, Gutierrez said, “She don’t want to go anywhere else.”

“We should work on Grace then,” Wardlow stated.

“That would piss Belle off,” Dixon said.

“Hank’s right,” Gutierrez said. “We need to do this one step at a time.”

Wardlow said, “What do you mean, Alma?”

“Maybe Legal Aid or one of those groups can help us. What’s the one that came around to talk to us at the renter’s rights clinic?”

“Coalition for Economic something,” Wardlow offered.

Dixon doubted that, but why bum his friends out further? Soon enough, reality was going to kick their ass, he figured. As the song went, life sure was a mother for you.

A rested Jessica “Jess” Dixon finished toweling off from her shower and got dressed in jeans and a loose button-up shirt she didn’t tuck in. The dream hadn’t visited her last night. It was cool this dawn in Riverside, but it would be hot and humid in the warehouse.

In her kitchenette she got the brown bag lunch she’d prepared the night before out of the refrigerator. She shook the bag, as if making a silent incantation its boring contents would change. How pathetic was it, she reflected, that she missed MREs, Meals Ready to Eat with their heater pouches? What a great invention. Right up there with Pop-Tarts and the spork. There were knock off types available she’d seen on the Internet but hadn’t gotten around to ordering any to sample yet.

One more thing to put on the get done list. But right now it was enough she was holding it together to get to work, get home, not blitz out on dope or drink, and get her ass back up and do it all over again. Regulations and regime, soldier. Head on straight, eyes on alert.

Catching her reflection in the polished silver breadbox, she put on her stoic face. Jess kept the kitchenette and its accoutrements sparkling and shining, she noted proudly.

Still in a reflective mood, she got downstairs to her hoopty to embrace a new goddamn day. She was stunned seeing the flat tire on her decade-old Camry. Bending and briefly examining the tire, she noted the slash in the sidewall.

“Shit.” Keying open the trunk to get the spare and tire iron out, she wondered who was messing with her. Coldly, she assessed several candidates who came to mind.

The Minimum Wage: A New Deal for Los Angeles Workers?