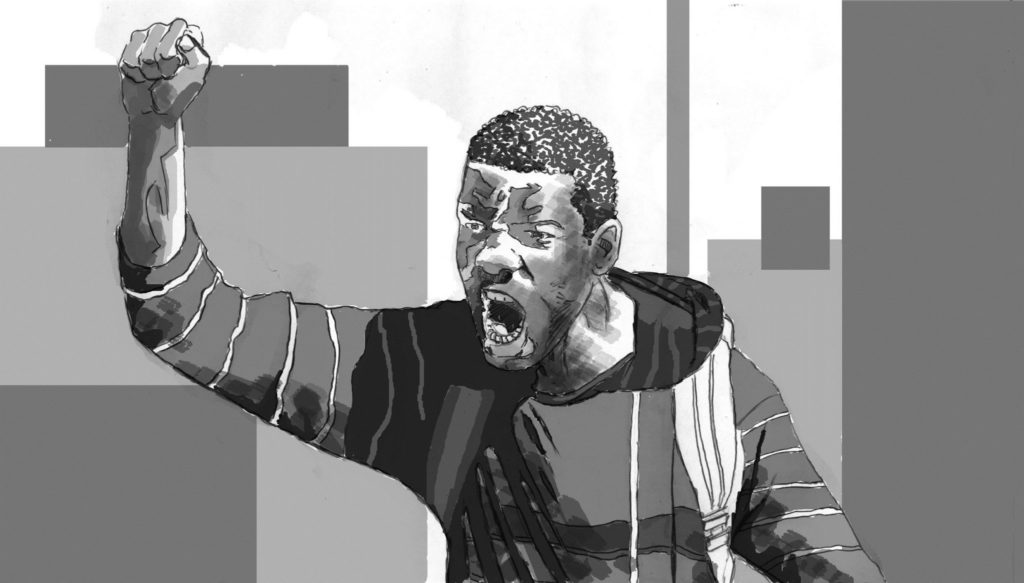 Little Joe had two cowboys, two kings and there was a third king face up on the table. They were playing Texas Hold’em and it had turned up on the flop—the first three cards laid down with two more to go. These were the common cards each player could try and make a hand. In Hold’em, you could play only one card of your two down ones or, if everybody had crap, all could play the five that eventually wound up in the middle of the table. At the moment, his three kings was a pretty good hand to have.

“I’ll see you fifty and I’ll bump it fifty,” Joanie Kriss said confidently. Of the three cards face up on deck, two were clubs. That might mean she had two clubs of her own and was chasing the fifth card in suit to make a flush … or was bluffing. The stakes were not Vegas level; the two red chips she’d thrown into the pot were fifty cents each.

The raise came to Little Joe and he saw it, putting in a dollar’s worth of chips, but didn’t re-raise. He leaned back, hoping to look relaxed.

“I’ll mention the elephant in the room,” Peter Moore said. “Will the grand jury hand down an indictment?” He referred to the pending case in Ferguson, Missouri. This involved the killing of an unarmed black teen, Michael Brown, suspected of stealing a handful of cigarillos, by a white police officer named Darren Wilson. The incident happened on August 9th and since then there had been demonstrations—sometimes peaceful and sometimes purposely violent by so-called professional leftists—in that municipality and many other cities in solidarity with those calling for justice for the deceased. Too, something in the neighborhood of half a million dollars had been donated in support of Wilson. Now, a few days away from Thanksgiving, the verdict was expected to be announced soon. Missouri’s National Guard was on alert and ready to march into Ferguson.

“Sad to say, but I wouldn’t bet on it,” Moore’s partner Jonas Bond said. He too saw the raise.

Vic Cole offered, “I didn’t practice criminal law, but as others in the law and outside of it have observed, the prosecutor, Robert McCulloch, has gone out of his way to steer the investigation and the pending decision in a certain direction.”

“Make it plain, Lincoln Lawyer,” Little Joe quipped, wondering as well what Bond might be holding.

Cole managed a wan smile. “He could have brought charges. He could have been very specific with the grand jury with a charge before them and presented the evidence to back that up.”

“Rather than throwing the proverbial kitchen sink at them, and telling them in effect, you choose,” Elva Avalos said scornfully. The bodybuilding water engineer had folded her hand previously.

There were nods and murmurs of assent. Little Joe’s smartphone vibrated in his pocket and he took it out. On the screen was a text message from the anthropologist Carmen Vaughn. It simply stated that she had a solid lead to DeMarkus Williamson. Moore, the dealer, dealt the turn, the fourth card. It was a king. Little Joe made sure to groan with the rest of the players.

Friday, the day after Thanksgiving, Hank Dixon and his niece Jess, who’d spent the night but had to be back at work later on swing shift, sat in his compact, spare living room watching the UCLA Bruins versus the Stanford Cardinal football game, televised from the Rose Bowl. What furniture there was had been obtained from Goodwill or similar secondhand outlets. The one contemporary item was the 40-inch flatscreen his niece and nephew got their uncle two Christmases ago.

Eyeing a tackle by a Bruin, Jess opined, “That’s messed up about the verdict, or should I say non-verdict.” She took a sip of her MGD beer and munched on some of the potato chips in the bowl set between them on an upended plastic milk crate.

“Yeah,” was all Dixon said. He had a twenty dollar bet with Pierre Gaston, the one-handed bartender at the Scorpion’s Tap tavern. He took UCLA, figuring they just had to beat Stanford this year. It had been a six-game losing streak since 2008. Surely they were due.

“The cop is six-four, over 200 pounds, but he said the kid was like a demon, got all Hulk Hogan on him and that’s why he had to pump all those bullets into him while he ran for his life. You couldn’t get away with that kind of shit in Iraq.”

Her uncle raised an eyebrow.

She held up her hands in mock surrender. “Okay, not all the time. But this is here, Uncle Hank. This is American citizens getting jacked ’cause of the color of their skin.”

He remained silent but then said, “You think all this protesting will lead to anything?”

“Not by itself, no. But there are some folks figuring out where to take it from here. Stepping up with strategies and tactics, like my top used to say.”

Hearing an echo of what Juanita Evers had said to him, Dixon decided that while it wouldn’t affect the Mike Brown matter, he would get more involved in the situation with the university. Maybe the lesson from Ferguson was you didn’t forget, you learned from these incidents and did what you could to prevent other such injustices happening in the future. Can’t just roll over.

He smiled and patted her knee. Too bad it looked like he was going to lose the bet, but you couldn’t have everything.

“What?” she said, smiling, reminding him of when she was 12.