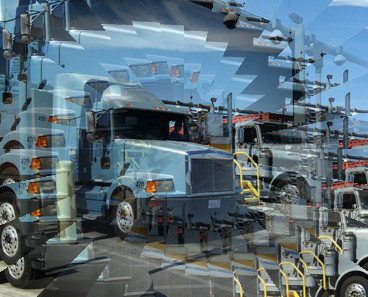 I try to cultivate an appreciation for language, linguistic uses and linguistic misuses. I have an especial appreciation for legal writing, in all of its absurdity. I tend to become inured to the way that people – typically more powerful people – use language to obscure rather than to elucidate.

I also read a lot of legal documents, especially agreements between port trucking companies and individual drivers. These tend to be awful, one-sided, unconscionable documents. Port trucking companies employ drivers, and then write “CYA” documents to attempt to hide the fact that they are misclassifying their drivers. The owners create sham truck leases and force drivers to sign them. All par for the course in an industry as dysfunctional as port trucking.

But then I read a sentence like that one, and it can still stop me cold. Read it out loud; let it roll off your tongue:

We’ve covered the issue of worker misclassification extensively here. Happily, of late we’ve been able to report some positive developments, as when a California court ruled in late February that four port truck drivers were misclassified – the company called them independent contractors when they were actually employees – and awarded them more than $100,000 in owed wages. (The company has announced it will fight the ruling.)

And while California makes slow and fitful progress toward addressing worker misclassification, a new study from the National Consumers League shows that two-thirds of Americans are unfamiliar with the concept of worker misclassification — defined by NCL as “a form of payroll fraud in which an employer intentionally classifies workers as ‘independent contractors’ instead of ‘employees’ in order to deprive workers of their workplace protections and defraud state and federal treasuries out of income taxes.”

And no wonder Americans want companies to cut out these shenanigans: While the negative impacts of misclassification fall most heavily on the misclassified workers, we all share the pain. NCL cited a 2009 Government Accountability Office study finding that worker misclassification “decreased federal revenues by $2.72 billion in 2006.”

And the shameful practice appears to be in the rise: “the number of unreported employees identified by [California’s] Economic Development Department increased by a third between 2006 and 2008.” (And this finding is not merely because of increased attention; this was before California began to turn its attention to worker misclassification in a focused way.)

Americans have disdain for the practice and federal and state governments are taking a closer look. In the context of port trucking, the link between worker misclassification and dirty air is established, and the more that courts examine driver misclassification, the more they side with drivers. So what are port trucking companies changing? Their language, of course.

When port trucking companies hire drivers, they generally force them to sign so-called “independent contractor agreements.” These agreements have always been shocking, in the disconnect between what exists on paper and how control is exercised in the real world. Lately, companies are making the language laughable. In addition to the gem I’ve cited  above, we recently encountered one agreement between a driver and a port trucking company from 2008 that was then mysteriously amended unilaterally in 2011 (right about the time when governmental agencies began to look more closely at port trucking misclassification).

The new agreement contained not only the standard boilerplate about the driver being an independent contractor, but went further, stating that the driver must “defend, hold harmless and indemnify” the company against any claims (by the driver himself or others) of being an employee. And also that if drivers want to adjudicate their status as employees, the only recourse available to them would be arbitration—not litigation, nor working with the government. (The four drivers whose status was addressed by the court recently had filed wage and hour claims with the California Division of Labor Standards Enforcement.)

But just labeling a relationship as “independent contracting” doesn’t necessarily make it so, no matter how many times you say it, what size font you put it in, or how you intimidate drivers to keep their mouths shut. As California Labor Commissioner Julie Su stated after winning the recent misclassification case, “drivers had signed agreements labeling them independent contractors but the Court saw the truth behind the label.”

Finally, some straight talking we can get behind.

What ‘Zombie Economics?’ The Minimum Wage & Its Critics