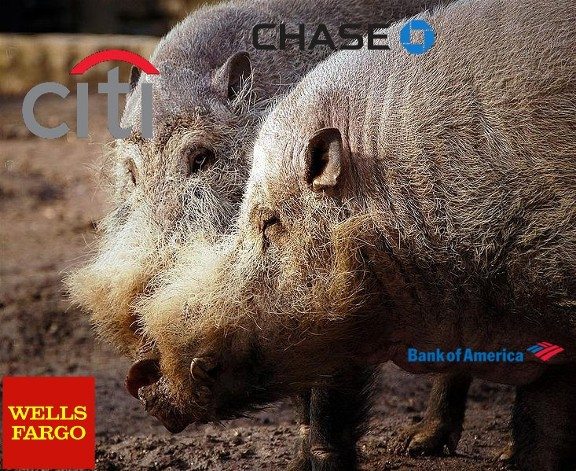 There’s something eerily Orwellian about the recent blog post, by L.A. Area Chamber of Commerce president Gary Toebben, entitled “L.A. Should Vote Down New Bureaucracy to Regulate Banks.” Mr. Toebben claims that a proposed new city ordinance that would reward banks that act responsibly toward L.A. consumers with the city’s deposits is “overly burdensome” and an “unnecessary regulation.”  This is because, Mr. Toebben argues, “the federal government oversees a heavily regulated banking industry” — implying that businesses like banks and other job creators need to be left free to make lots of money, create lots of jobs so that the benefits can trickle down to everyone else.

The banking industry in the United States is “heavily regulated?” Really?  Did the L.A. chamber somehow miss the great recession of 2008? You know, that one where the under-regulated banks got into so much trouble that we had to spend more than $700 billion in taxpayer money to bail them out?  And isn’t the chamber the same organization that has opposed all financial reform at the national level since the Great Depression?

“In fact,” according to U.S. Chamber Watch, “the chamber lobbied for the very policies that created our country’s financial meltdown and chamber leaders have continued to fight any kind of reform that would prevent future collapses.”

For the 99 percent of us who suffer the effects of corporate greed and lack of rules and regulations, this sounds exactly like doublespeak. To argue that the L.A. City Council shouldn’t adopt banking reform because the Feds already do that, but, at the same time, argue that the Feds shouldn’t do that sounds, well, like a scene from George Orwell’s novella, Animal Farm.

For those of you who may not remember this classic satire from high school, the story revolves around the enslaved animals on the Jones family farm, who – led by the most intelligent pigs – kick out the nasty humans and adopt a form of collective government where the pigs are in charge.  In this delightful scene filled with doublespeak, the pigs convince all of the rest of the animals that it is in everyone else’s best interest for the pigs to have all of the best food; that rules about equal distribution of food are counterproductive and that everyone will benefit from giving the best food to the more intelligent pigs:

“The early apples were now ripening, and the grass of the orchard was littered with windfalls. The animals had assumed as a matter of course that these would be shared out equally; one day, however, the order went forth that all the windfalls were to be collected and brought to the harness-room for the use of the pigs. All the pigs were in full agreement on this point . . .  Squealer was sent to make the necessary explanations to the others.  ‘Comrades!’ he cried. ‘You do not imagine, I hope, that we pigs are doing this in a spirit of selfishness and privilege?  . . . We pigs are brainworkers. The whole management and organisation of this farm depend on us. Day and night we are watching over your welfare. It is for your sake that we drink that milk and eat those apples.’ . . .

The importance of keeping the pigs in good health was all too obvious. So it was agreed without further argument that the milk and the windfall apples (and also the main crop of apples when they ripened) should be reserved for the pigs alone.”

Fortunately, we live in a democracy, rather than the totalitarian state imagined by George Orwell. The chamber’s argument that banking regulation is unnecessary is, well, very difficult to swallow. Ironically, the chamber’s post came out the same week that hundreds of thousands of people across the world demonstrated against the abuses of millions of regular people by under-regulated banks and over-compensated CEOs.

Figuring out the details of the city policy is something that needs to be done, but most people in this country seem to believe strongly that reform is needed. Luckily, one plus one equals two and common sense will—hopefully– lead our policymakers to strengthen the rules to keep those greedy bankers from eating all of the best apples.

I’m Creating Jobs – How About You?