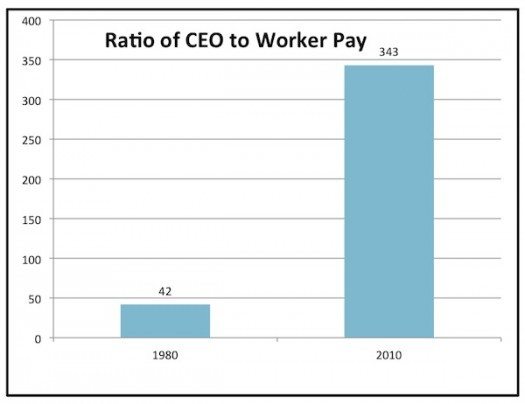 When Peter Drucker was writing about executive compensation in the 1970s, his purpose was to puncture some of the myths about it. Executives, Drucker pointed out at the time, weren’t getting paid as much as people seemed to think. At most companies, the ratio of CEO pay to average employee pay was less than 25-to-1, while most Americans erroneously believed it to be 50-to-1 or 100-to-1.

But that would all change in the following decades. Today, the CEOs of the largest U.S. companies make 354 times more than the average rank-and-file worker. At some companies— including Abercrombie & Fitch, CBS and Nike—the ratio is in excess of 1,000 to 1. (See this chart from Bloomberg for details.)

As far as Drucker was concerned, this sort of pay structure was absurd. “It is surely not professional altogether for people who are employees and not “owners” to pay themselves salaries and bonuses greatly in excess of what their own colleagues, that is, other members of management, receive,” Drucker wrote in The Frontiers of Management. “And it is not professional to pay oneself salaries and bonuses that are so far above the social norm as to create social tension, envy and resentment. Indeed there is no economic justification for very large executive incomes.”

In fact, in The Changing World of the Executive, Drucker recommended that companies have a “published corporate policy that fixes the maximum compensation of all corporate executives, after all taxes but including all fringes, as a multiple of the after-tax income of the lowest paid regular full-time employee (including fringes).” He added, “The exact ratio is less important than that there should be such a ratio.” (His suggestions ranged from 15-to-1 to 25-to-1, depending on the size of the company.)

Given Drucker’s view, we are confident that he would have supported a provision in the Dodd–Frank Wall Street Reform and Consumer Protection Act mandating that companies disclose the ratio of CEO pay to median company pay. (We even wrote our own letter to the Securities and Exchange Commission about this.)

Now, however, the House has voted to repeal that provision. The Wall Street Journal reports, “Rep. Bill Huizenga (R-MI), who sponsored the bill, said the provision would be ‘a logistical nightmare for all public companies,’ because they would have to calculate pay for all employees in the manner they currently do for their top five executives and disclose it in every SEC filing.”

Drucker wouldn’t have been entirely unsympathetic, for he worried about “the growing burden of governmental regulations, restrictions, reports and paperwork.” But he also saw a place for the right kind of regulation.

The key was to measure the costs and benefits properly. “Regulations are a burden on the economy,” he wrote. “In many cases the burden is greatly overbalanced by the benefits . . . But we need to know the tradeoffs.”