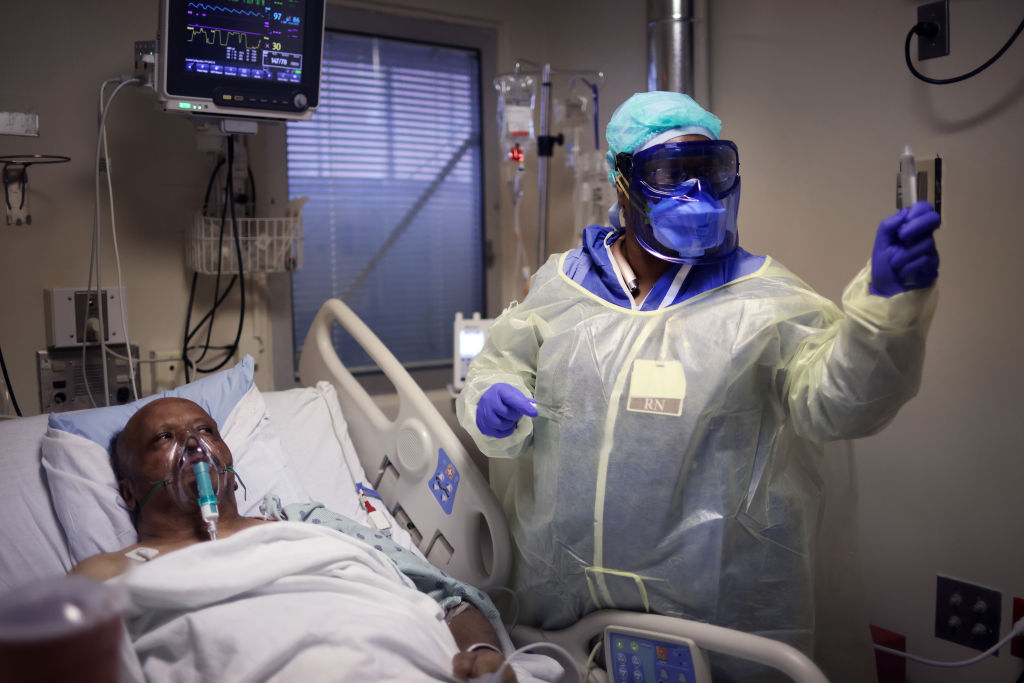 Federal researchers had braced themselves for the result. In a year ravaged by hundreds of thousands of deaths related to COVID-19, it stood to reason that the average life expectancy in the United States, a basic measure of the nation’s collective health, would drop. It was unusual, but not unprecedented.

Instead, researchers were staggered by what they found. Life expectancy in the U.S. decreased by a full year during the first half of 2020 alone, their report said — the largest such setback since World War II, and one of the clearest signs yet of the havoc the virus has wrought on the country.

Unequal health care conditions have been exacerbated by four years of deleterious Trump administration policy decisions, many of which contributed to worsening health outcomes
in communities of color.

“I knew it was going to be large, but when I saw those numbers, I was like, ‘Oh, my God,’” Elizabeth Arias, who wrote the report for the National Center for Health Statistics (NCHS), told the New York Times. “We haven’t seen a decline of that magnitude in decades.”

The news drew headlines when the report was released late last week, and others in the field chimed in with their own surprise. Life expectancy at birth, after all, has been on the rise in the U.S. since the middle of the 20th century, with only occasional and comparatively minor setbacks along the way.

Still, none of that gets to the most serious information contained in the NCHS findings. You have to go farther inside the numbers for that — and what becomes clear, for those who’ve been studying the grim course of the coronavirus, will be perhaps as unsurprising as it is upsetting.

In short, the report casts the country’s racial and ethnic disparities in stark terms. While the life expectancy of white Americans declined by 0.8 years in the first half of last year, the figure for Latinos was 1.9 — and for Blacks, it soared to 2.7 years lost. The same forces that have driven COVID infection and death rates through communities of color are reflected in the NCHS’s work all too clearly.

Because vaccines are now being distributed, most experts agree that the numbers on life expectancy will bounce back as COVID is slowly brought under control. On the other hand, the current report does not include the second half of 2020, when several new waves of the virus cut swaths of disease and death through the country.

In the bigger picture, however, the conditions that produced these unequal health results not only continue to reverberate, but also have been exacerbated by four years of deleterious Trump administration policy decisions, many of which contributed to worsening health outcomes in communities of color.

Among Blacks and Latinos, COVID-related deaths occurred disproportionately in younger age groups, driving down their own overall life expectancies: Blacks to age 72 and Latinos to age 79.9.

In a stinging rebuke of the Trump years in the peer-reviewed weekly medical journal The Lancet, authors of a summary of the period noted that although Trump’s attempt to dismantle the Affordable Care Act failed, “he weakened its coverage and increased the number of uninsured people by 2.3 million, even before the mass dislocation of the COVID-19 pandemic, and has accelerated the privatization of government health programs.”

One result was those 2.3 million fewer insured people when the pandemic hit. When the virus arrived in the U.S., it spread viciously through minority communities that often included large numbers of essential workers, who could not do their jobs from home, and sometimes featured crowded and multigenerational living conditions. Add in the fact that Black and Latino adults carry higher rates of such pre-existing conditions as diabetes and that their access to health care is poorer overall, and the recipe for a disaster was written.

The NCHS data gives a numerical shape to that misfortune. Overall, life expectancy in the U.S. declined to 77.8 years from 78.8 years in 2019. Among Blacks and Latinos, COVID-related deaths occurred disproportionately in younger age groups, driving down their own overall life expectancies, Blacks to age 72 and Latinos to age 79.9. (The NCHS did not include figures for Asian American or other racial groups.) Dr. Mary Bassett, former health commissioner of New York City, told the New York Times that the coronavirus death rate for Black people between age 35 and 44 was nine times greater than that of white people during the same half-year of 2020.

Researchers note that COVID isn’t necessarily the only contributor to the downward change in life expectancy. Among other things, overdose deaths, which had been an issue at the height of the opioid crisis several years ago before finally decreasing, shot up dramatically again last year; in December, the Centers for Disease Control said that more than 81,000 deaths related to overdoses occurred in the 12 months ending in May 2020, the highest number ever recorded for a 12-month period.

And as doctors and clinic administrators have been pointing out for months, the pandemic itself led to mass cancellations of standard health appointments in the early part of 2020, as patients opted to stay away from places where they thought COVID might be present. Those missed appointments could contribute to higher rates of death in areas like strokes and heart disease, experts said.

With that noted, one takeaway looms over the future collective health of the nation. In poorer neighborhoods, in communities of color, the continued lack of access to decent health care is decimating a generation. The COVID crisis has brought that notion into a statistical reality.

In 2014, after years of gains by Black Americans in several health-related categories, the average difference in life expectancy between whites and Blacks in the U.S. had narrowed to 3.4 years, the lowest in recorded history. As of 2020, that gap has expanded to six years – the widest since 1998. The second half of the pandemic year has yet to be recorded. When it is, it will be hard to express shock at the results of a dynamic that we see playing out daily in America’s most challenged neighborhoods.

Related Topics:coronavirusFeaturedracial disparity
Up Next