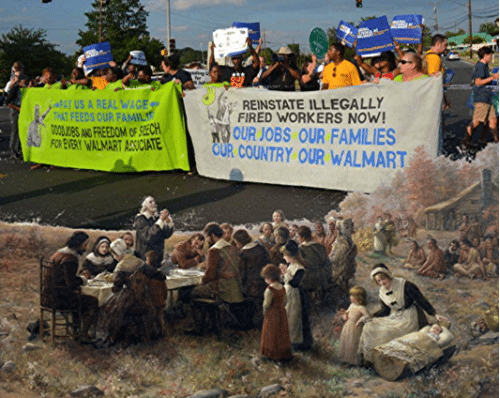 So an Ohio Walmart started a food drive among its employees to help its lower income workers get a decent Thanksgiving. “Please Donate Food Items Here so Associates in Need Can Enjoy Thanksgiving Dinner,” reads a sign in the clerk’s break room. Someone snapped a photo on their cell phone, put it on-line and it went viral. The image underscores what Walmart itself knows: One million of its employees earn less than $25,000 dollars a year – impossible to live on in Ohio, much less Los Angeles, where an average apartment rents for $1,480 a month.

But did you know that L.A. County also leads the nation in “food insecurity”? That’s the current euphemism that means people are likely to go hungry. A national network of food banks estimated that 650,000 children in our county risk going without enough to eat. These are kids who live with parents or guardians who cannot afford a balanced meal or who skip dinner themselves to feed their children.

No wonder. The median wage in this country – what half the working people earn – has hit the lowest level since 1998. Half of all workers in America earn $27,519 or less a year. At that rate it takes two people working in a family of four just to reach the bottom rung of the middle class.

Moreover, the average work week has decreased to fewer than 34 hours over seven days because of the rise in part-time jobs, mostly due to the growth in restaurants and retail sectors of the economy, which create less than full-time positions. So people with families stretch every way they can to make ends meet, including enrolling in taxpayer-supported government programs.

A study of fast-food workers says that 52 percent of “front line” fast food employees receive some form of public assistance each year. They receive food stamps or Medicaid or housing subsidies or the earned-income tax credit. The cost to taxpayers is about $7 billion annually. But while fast food may have the highest percentage of workers receiving aid, others sectors rank close behind: 44 percent of food service workers, 35 percent of agricultural, forestry and fisheries workers, and 30 percent of people in the retail trades, also depend on assistance.

This aid amounts to an indirect subvention to businesses because they do not pay a living wage. If they did, taxpayers wouldn’t need to subsidize their profits – in essence, paying for that burger twice: once at the store, again on April 15th. But the big companies say that if they paid a decent wage they would have to raise prices – which would hurt their low-income customers. Of course, that is nonsense. Poor people cannot afford to eat at McDonald’s except for a very occasional “special treat” – not the way the middle class typically thinks of a fast-food place.

Low wages hurt the economy in other ways. For example, young people and other low-wage workers are locked out of the new car market. They are not buying those cars rolling off the assembly line. Only the richest quarter of Americans buys new cars. The other three-fourths don’t qualify for loans, or can’t fit payments into their monthly budgets, or already carry too much debt. So in a consumer economy, if workers cannot afford to buy the products, the companies don’t make the sales and everyone gets squeezed further.

The notion that fast-food workers have to earn less than a livable wage in order for businesses to thrive in the current so-called brutal conditions of market forces just isn’t true. In-N-Out Burger – a small Southern California based, family-owned fast-food chain – pays a $10.50 an hour starting wage, plus medical benefits, paid vacations and a retirement plan. I know people from other parts of the country who can’t wait to get here for their burgers.

That company isn’t posting signs asking their employees to donate canned goods to each other for Thanksgiving. They pay their employees enough to provide for their own dinner. That’s the way it’s supposed to be in this country. If you work you should earn enough to provide housing, food and health care for your family. Then, gratitude makes sense when you gather around the table with family and friends.