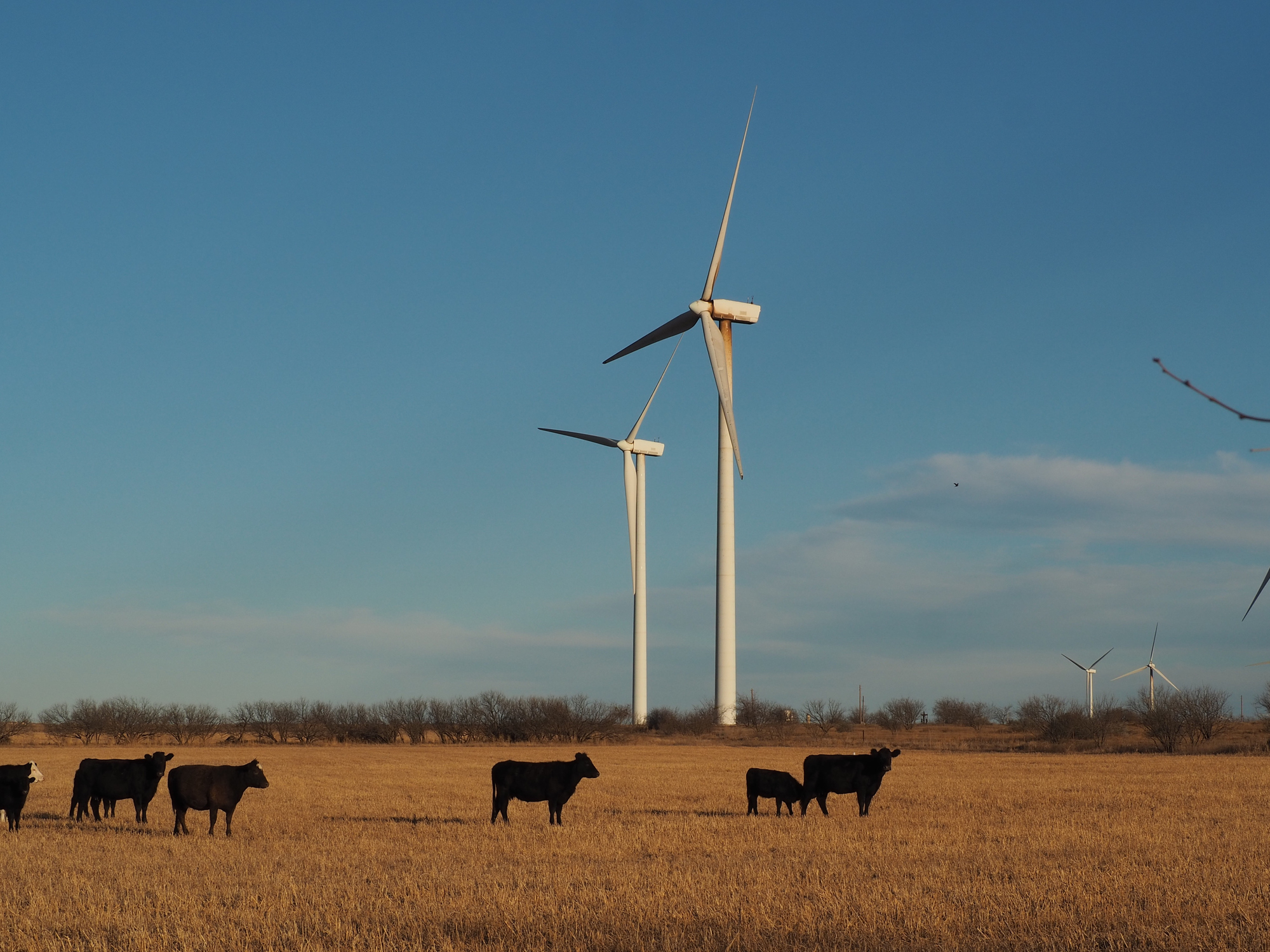 A wind farm in the Texas Panhandle. Texas produces the most wind power of any U.S. state. Photo: Dave MacVean.

This story is the fourth in a four-part series.

Passage of the Inflation Reduction Act — hailed by environmentalists as the most ambitious climate legislation ever enacted — might seem like a slap in the face to a state like Texas where pumpjacks and drilling rigs have long since replaced Stetsons and Longhorns as symbols of its economic muscle. The Lone Star state is a snarl of pipelines and production facilities with knots of refineries and chemical depots and canals carved into the coastline to connect tank farms to oil tankers. But few Americans realize that hidden behind the image of gas flares and Texas tea is the reality that the state has also built the largest wind and solar grid in the United States. As such, Texas is positioned to reap a huge windfall in federal tax credits, grants and rebates under the energy and climate provisions of the IRA which total roughly $370 billion.

For the 28 million residents of Texas, who stand to benefit directly from home energy efficiency improvements, green energy job creation initiatives and rebates for electric vehicles, this ought to be good economic news. Even better, the Biden administration says the IRA’s numerous programs could “reduce greenhouse gas emissions by about 1 gigaton in 2030, or a billion metric tons.”

That’s a crucial commitment for a state whose residents are more vulnerable to climate change than any other in the country, according to Andrew Dessler, director of the Texas A&M Center for Climate Studies. “There’s no climate impact that doesn’t hit Texas,” Dessler said. “We have hurricanes. West Texas is part of the Southwest and will dry up and blow away. East Texas has forest fires and extreme precipitation events.”

Texas is a major methane emitter, and the Inflation Reduction Act includes the first-ever federal fee for lost methane.

But the big question is: Will Texas politicians get in the way of the IRA’s economic benefits if reaping those rewards also means addressing a climate crisis that they have long denied? On Aug. 22, a shocking reminder of the looming ravages of climate change arrived in the form of nine inches of rain falling on the Dallas-Fort Worth region — an average summer’s worth of rain in a single day, according to the National Weather Service. The deluge triggered flash floods that killed at least one person, damaged over 100 homes and caused the city’s sanitary sewers to overflow. At a news conference about the floods, however, Gov. Greg Abbott refused to even say the words “climate change.”

That denial made many Texans worry that Republican elected officials would sooner drive off a climate cliff than admit to past errors. This is especially troubling in a state where many are still reeling from a 2021 freeze that caused most of the state’s electricity grid to fail, leaving millions without power for days and causing at least 210 deaths. This past summer, Texas suffered the opposite extreme when a severe drought stressed the electrical grid again and pushed some local water authorities to the brink of failure and cost the state’s cotton farmers an estimated $2 billion.

“Everything happens to Texas,” Dessler said. “Which is what makes it so tragic that our elected representatives are not just lackadaisical, but actively hostile.”

Given that reality, some policy experts, despite their praise for the incentives woven into the IRA, worry that any significant gains may be undone by elected officials who — for political advantage and financial profit — refuse to enforce the law’s few regulations.

Daniel Cohan, an atmospheric chemist and energy policy expert at Rice University, said that on reading the IRA he was immediately struck by the preference for carrots over sticks — incentives over penalties — to drive emissions reductions. “This bill showers subsidies on every technology needed to mitigate climate change,” he said. “With so many sweeteners thrown in, it’s an all-you-can-eat carrot cake buffet. There’s something for everyone.” That includes the oil and gas industry, which will benefit from expansion of offshore oil and gas leases and carbon capture and sequestration funding. “The only stick this bill has is the methane restrictions,” said Cohan.

Texas is a major methane emitter, and the IRA includes the first-ever federal fee for lost methane, the “stick” to which Cohan referred. It’s something climate activists have sought for years — and something the oil and gas industry and its allies in government have opposed at every turn.

Methane is about 80 times more potent than carbon dioxide in terms of its effect on global warming during its first two decades in the atmosphere. It is commonly leaked, vented or flared at production sites and along the pipeline routes that carry gas from well to market. The IRA imposes an escalating fee that will be charged to oil and gas facilities that report annual methane emissions above a specified threshold. It falls under a subsection called the Methane Emission Reduction Program, which also provides $1.5 billion for improving methane emissions monitoring and reduction.

But regulations are only as strong as regulators’ will and capacity to enforce them, and it will fall to state agencies to administer the IRA’s methane restriction — along with almost all of the bill’s other climate provisions. That fact has caused environmental advocates here in Texas to temper their optimism about how much the IRA — including its methane charge — will actually do to cut emissions.

Previous federal efforts to regulate methane emissions have drawn fierce opposition from the state’s top elected officials. In 2013, while serving as Texas attorney general, now-Gov. Abbott sued the EPA over rules designed to curb methane leaks from gas infrastructure. His successor, current Texas Attorney General Ken Paxton, sued the EPA in 2016 over a methane rule that was eventually rendered toothless by the Trump administration. In January 2021, President Biden signed an executive order calling for a new and stricter methane rule, which is expected to be finalized in late 2022. Abbott immediately responded with an executive order of his own, accusing the White House of “extreme hostility toward the energy industry, and thus toward Texas.”

Vowing to protect the industry, Abbott ordered state agencies to “use all lawful powers and tools to challenge any federal action that threatens the continued strength, vitality and independence of the energy industry.” Paxton and Abbott have not commented on the methane charge embedded in the IRA, but their shared aversion to any federal limitations on methane is well established. Abbott, who is currently on the campaign trail seeking a third term, has never backed down from his previous statements, and he continues to hammer the Biden administration and the EPA’s efforts to rein in emissions.

Forcing Texas to abide by new standards and pay new fees imposed by the IRA may be especially difficult, not only because of high-profile figures like Abbott and Paxton, but also because of the unusual structure of Texas’ regulatory bodies and the little-known but entrenched interests that control them.

In Texas, regulatory authority over the oil and gas industry falls chiefly to the Texas Railroad Commission, which, despite the name, has no jurisdiction over railroads. The Railroad Commission is responsible for permitting oil and gas projects and monitoring regulatory compliance throughout the lifespan of wells, from drilling to production and plugging. It also oversees pipelines and oil and gas emergency response. The agency’s stated mission is straightforward enough: “To serve Texas by our stewardship of natural resources and the environment, our concern for personal and community safety, and our support of enhanced development and economic vitality for the benefit of Texans.” But environmental watchdog groups have raised concerns about the Railroad Commission’s ability to carry out its regulatory functions, which may soon include monitoring and enforcement of the IRA’s methane restriction and the forthcoming EPA rules.

According to a recent analysis by the Laredo-based nonprofit Commission Shift, the Railroad Commission has just 173 inspectors on the oil and gas safety inspection team, who are tasked with monitoring about 1.65 million oil and gas wells in various states of activity, from old and abandoned to currently producing. The pipeline safety team, responsible for monitoring about 250,000 miles of pipelines, employs just 65 inspectors. “That’s just one site inspector per 3,900 miles of pipeline and one inspector per 9,500 wells across the state,” the report asserts. “These ratios raise serious doubts about the thoroughness and efficacy of inspections of both active and inactive wells across the state.”

Field investigators from the nonprofits Earthworks and the Environmental Defense Fund (EDF) have used flyovers and optical gas imaging cameras to document widespread leakage and unauthorized flaring and venting at production and storage facilities in Texas. The Railroad Commission permits flaring within 10 days of drilling under Statewide Rule 32, but after that window, an exception is required to continue flaring.

These Rule 32 exceptions are supposed to apply only in emergency or unusual circumstances, but an Earthworks analysis of the Railroad Commission’s flare permitting database revealed that the agency has not denied a single request for an exception or extension since 2012. In that same timeframe, it has issued more than 27,000 exceptions. “Since 2019, the Railroad Commission has permitted over 1.06 trillion cubic feet of emissions,” the report says. “That is enough to supply nearly 15 million homes for a year.”

“There’s no way to regulate the oil and gas industry with our current system.”

And yet, despite the apparent ease of acquiring Rule 32 exceptions, the Earthworks and EDF analysis shows that many operators still don’t bother to get them. Repeated flyovers of a specific study area matched active flares against the Railroad Commission’s Rule 32 exception permit registry and found that only 15% were in compliance every time.

Environmental advocates say this lack of rigor in Rule 32 oversight is just one indication, among many, that the Railroad Commission does not have a clear understanding of how much methane is being lost and unaccounted for, let alone how much carbon dioxide, sulfur dioxide or other volatile organic compounds.

Referring specifically to the IRA’s methane regulation, Commissioner Christian told Capital & Main, “The fees associated with Biden’s Methane Emissions Reduction Program will shut down oil and gas production in Texas, which will kill jobs, harm our economy, increase costs to consumers, lessen energy security and reduce the reliability of our grid. A change like this during a recession is the definition of insanity.”

Sharon Wilson, a certified optical gas imaging camera operator and Earthworks field operative in Texas who co-authored the recent report, said she is doubtful about the willingness and ability of state officials to implement the new methane restriction in the IRA and the forthcoming EPA methane rule. “It’s a comprehensive total failure across the board, everywhere, and there’s no way to regulate the oil and gas industry with our current system,” Wilson said. “The EPA has delegated enforcement of these rules, so who’s going to enforce these rules?” she said. “The states are who’ve got us to where we are now. The states either cannot or will not enforce rules.”