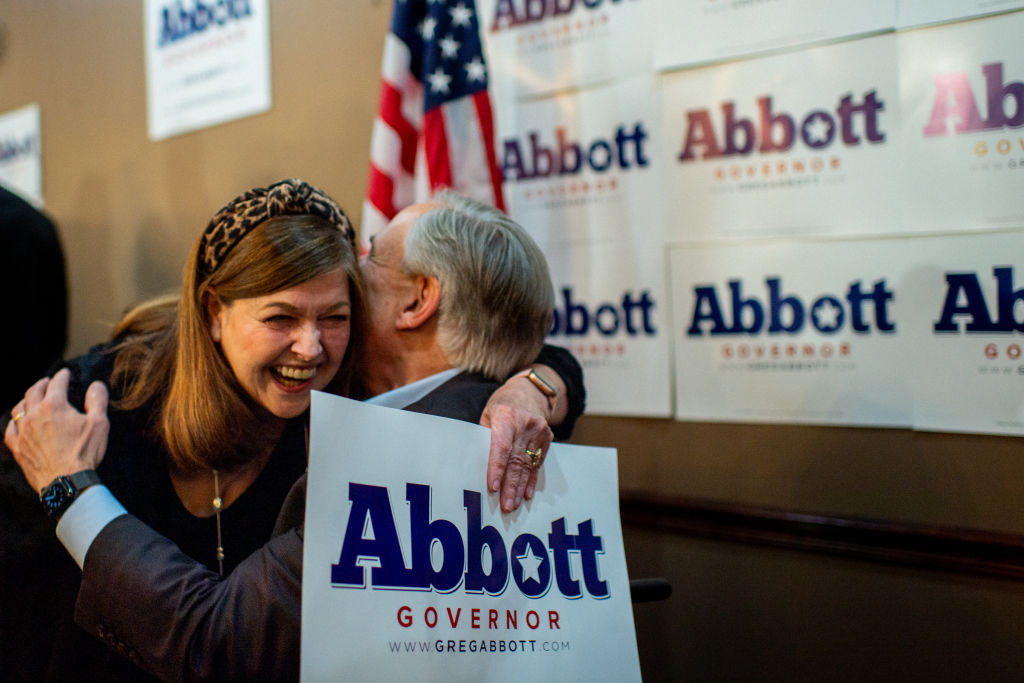 Texas Gov. Greg Abbott is embraced by a supporter during a February campaign event in Houston. Photo: Brandon Bell/Getty Images.

As most pollsters had predicted, Texas Republicans routed their Democratic rivals in all statewide races in Tuesday’s midterm elections. Incumbent Gov. Greg Abbott defeated his Democratic rival, Beto O’Rourke, by double digits. Republicans won by similarly wide margins in races for lieutenant governor, attorney general, land commissioner, Railroad Commission chairman and comptroller. Republicans are also likely to retain control of both chambers of the Legislature, which they have held since 2003.

All of these positions will have direct and indirect influence on how the state will manage — or decline to manage — green energy transition, oil and gas industry oversight and regulation, climate change preparedness and environmental justice concerns.

Four more years of Greg Abbott will likely continue what climate scientists and environmental advocates say is a failure to take aggressive action to protect Texas from the worst consequences of climate change. Abbott, who received more than $12 million in campaign contributions from oil and gas industry-related individuals and groups before the 2022 primary, refuses to even use the words “climate change.”

As president of the Texas Senate, Lt. Gov. Dan Patrick, who was reelected Tuesday to a third term, has used his position to push legislation that protects the oil and gas industry, including 2021’s Senate Bill 13, which forces state pension funds to pull their investments from financial firms such as BlackRock that have made commitments to divest from fossil fuels — boycotting the boycotters. (A Texas Monthly investigation found that Patrick still had significant personal investments with BlackRock a year after the passage of SB 13.)

Comptroller Glenn Hegar, who won reelection Tuesday — and whose office is tasked with enforcing Senate Bill 13 — has also been an outspoken antagonist of federal efforts to enforce the Clean Air Act. In September, Hegar responded to an EPA proposal designating parts of the Permian Basin — a major oil and gas producing region — to be out of compliance with national air quality standards set under the Clean Air Act by accusing the agency of “federal overreach” and prioritizing “Green New Deal politics over the jobs and the Texas economy.” For Hegar, the Clean Air Act’s standards amount to “job-killing mandates.”

Wayne Christian won reelection to the Texas Railroad Commission, the misleadingly named three-person panel charged with regulating the oil and gas industry. (Christian hauled in more than $800,000 in campaign contributions from the industry he oversees before the 2022 primary.) First elected to the Railroad Commission in 2016, and chairman since 2019, Christian has been an outspoken defender of industry interests, advancing permits for drilling and emergency flaring while overlooking countless violations.

Houston and Harris County residents who have been alienated by the state’s bungled disbursement of Hurricane Harvey relief funds — managed by the outgoing land commissioner, George P. Bush — may hold out hope for better treatment from his replacement, Republican Dawn Buckingham. “My only goal when taking office will be to get these funds to the actual people who need them,” Buckingham said, “not participating in political turf wars.”

If there is one bright spot for Texans who support action on environmental justice, climate change resilience, green energy transition and accountability for polluters, it’s Harris County. In a closely watched race that made national headlines — in a diverse county that has been targeted by new voter suppression laws — voters reelected Judge Lina Hidalgo, a Democrat who has boosted funding for Harris County’s pollution control agency and helped advance legal action against polluters.

But for all of Houston and Harris County’s unique exposure to climate change threats, the area’s disproportionate public health burden from decades as a refining and chemical hub and its towering backlog of unaddressed damage from Hurricane Harvey, Hidalgo’s election was only marginally about environmental concerns. As in much of the rest of the country, the race for Harris County judge centered on crime. “The people of Harris County chose optimism over fear,” Hidalgo said, “people over politics.”