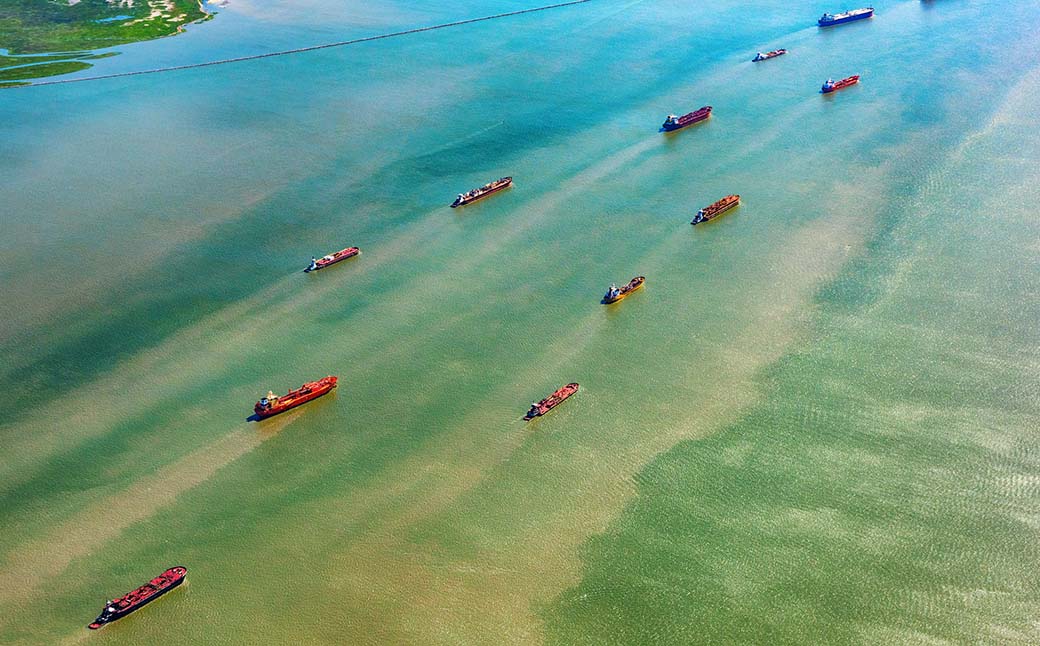 A little over four months after launching its first oil shipment from the Texas Gulf Coast, Max Midstream appears to be sailing in hot water. The young oil pipeline and shipping company — founded by Houston real estate developer Todd Edwards and British financier Azad Cola — shipped its first oil in May, shipped its last in June and has since been hit with a brace of expensive lawsuits alleging crimes from fraud to forgery, as well as a lien against its properties for $1.4 million in unpaid bills.

The company was founded in 2019 to transform the oil shipping facility at the Port of Calhoun at Point Comfort, Texas, from a small-time port to a major oil export hub. The plan was to siphon business away from the export behemoths of Galveston and Corpus Christi by upgrading the port facilities, dredging the local shipping channel and building new pipelines from two major Texas oil hubs to the Port of Calhoun. It also announced plans for new storage facilities at both hubs and a new oil tank farm at the port to handle the increased flow.

All of this effort was aimed at getting a cut of the oil produced in the Permian Basin of Texas and New Mexico, and from the Eagle Ford Basin in Texas, and shipping it to Europe.

The young oil pipeline and shipping company Max Midstream shipped its first oil in May, shipped its last in June and has since been hit with a brace of expensive lawsuits.

To support the project, the Calhoun Port Authority floated $85 million in bonds on behalf of Max Midstream last year so it could begin upgrading port operations. That was upped to $120 million this June to include improving facilities at the oil hub in Edna, Texas.

Records from the Texas Railroad Commission show that Max Midstream now operates three pipelines that connect the oil hubs to the Port of Calhoun. But according to the port’s shipping records, Max Midstream hasn’t moved any oil since June 19, and people who work at the port confirm that since that date the company’s oil loading equipment hasn’t been used.

And then there are the legal fireworks.

In May, Bay Limited, a subcontractor for construction work at the Port of Calhoun, claimed it had not been paid and filed a $1.4 million lien against Max Midstream’s property at the port for reimbursement.

In June, Petrolix, another construction contracting company, alleged that Max Midstream did not pay for its work at the port and sued for fraud and breach of contract.

Then in July, Max Midstream and NFG Energy Services, the main contractor for work at the port, filed dueling lawsuits within a couple of hours of each other in district court. Max Midstream is suing for breach of contract, claiming NFG did not pay subcontractors and refused to finish work.

In contrast to the pages of wordy legal filings, Max Midstream has been quiet. On the company’s website, its regular news updates ended in April.

Meanwhile, NFG is suing Max Midstream, Edna Terminal, Seahawk Pipeline and Seahawk Terminal — more LLCs for which Edwards is president and Cola is an officer — for more than $38 million (plus interest) for nonpayment and breach of contract.

NFG alleges it was not paid for pipeline work, tank repair and facilities construction done in and around the Port of Calhoun beginning in September 2019.

In a separate case, NFG Energy Services is suing Edna Terminal for forgery. NFG claims it purchased 1.4 acres of property to complete pipeline projects under a contract with Edna Terminal. NFG alleges that signatures on a November 2020 property transfer giving the land to Edna Terminal are fraudulent because NFG’s manager was recovering from a serious car wreck and was not present to sign the papers.

Those are just the cases dealing with construction work, payment and forgery.

The latest suit, filed on Sept. 19, comes from Vault Davinci Resources, a Houston-based investment company. According to the suit, in March 2019, Vault Davinci loaned $800,000 to Pall Mall Oil and Gas Texas Holdings, yet another company run by Edwards. Vault Davinci is looking to be repaid over $1 million in principal and interest on the loan, plus possible punitive damages and attorney’s fees.

According to corporation records at OpenCorporates, Edwards incorporated Pall Mall Oil and Gas Texas Holdings about six months before he incorporated Max Midstream. And in August this year, Pall Mall “Forfeited Existence,” according to the Texas Secretary of State Office. Basically, the state revoked the company’s right to conduct business.

Part of the plan for the Port of Calhoun expansion includes dredging a deeper shipping lane through Matagorda Bay and building new port facilities next to a Superfund site contaminated with mercury.

In contrast to the pages of wordy legal filings, Max Midstream has been quiet. On the company’s website, its regular news updates ended in April.

Multiple phone calls and emails sent to Edwards and Max Midstream were answered by Kasey Pipes, a partner in the Fort Worth and Washington, D.C., based lobbying and PR firm Corley + Pipes. Pipes — whose website says he was an adviser to California Gov. Arnold Schwarzenegger and President George W. Bush — asked for questions on behalf of Max Midstream, then didn’t respond to multiple follow-up emails and phone calls.

The Port of Calhoun expansion project has been contentious since it was first announced. Part of the plans include dredging a deeper shipping lane through Matagorda Bay and dredging and building new port facilities next to a Superfund site contaminated with mercury. All of this angers local environmentalists and commercial fishers and crabbers who worry that the dredging will churn mercury-contaminated mud into the local fishery.

And while it’s unclear what is happening with Max Midstream, maintenance dredging work at the port has already begun.

That has Diane Wilson — a legendary or notorious local activist, depending on whom you ask — outraged.

Her years-long fight against local operations of international industrial behemoth Formosa Plastics Corporation for dumping plastic waste in Matagorda Bay landed her a $50 million settlement — money that has gone to revitalize local fishing and shrimping businesses in the area around Calhoun.

Since the beginning, she has led the fight against the Port of Calhoun expansion plans because they threaten the health of the bay and those rebounding fishing businesses. And she calls the spate of lawsuits against Max Midstream and the dredging “crazy.”

At a recent meeting of the Calhoun County Navigation District (the governing body of the Port of Calhoun), she says she confronted Charles Hausman, the director of the Port of Calhoun, about Max Midstream’s legal issues: “If a fisherwoman can know this, how can you not know it?” she asked.

She says he wouldn’t answer.

Phone calls and emails to Hausman for this story also went unanswered.