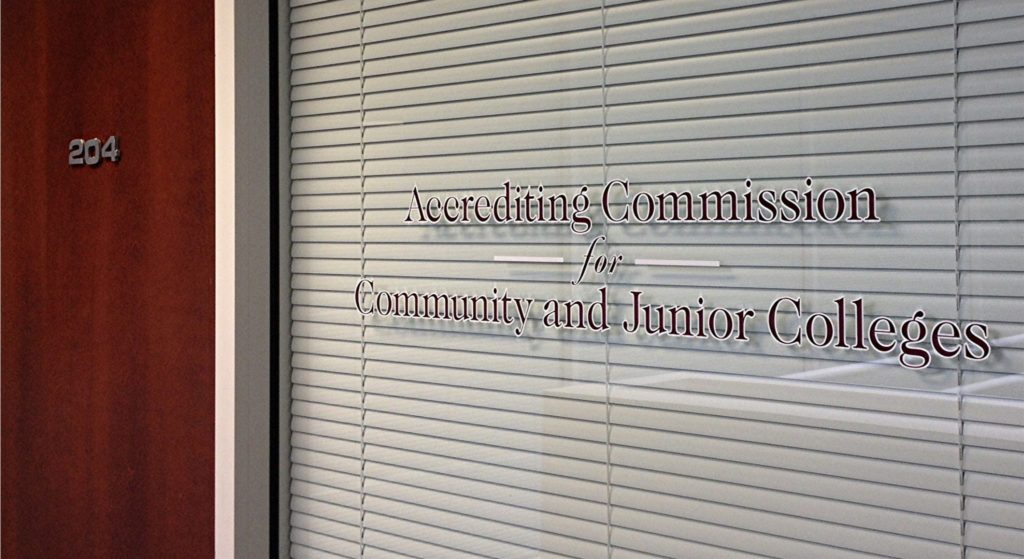 “It is too far gone, let’s start over again.” That is the growing consensus of opinion after years of rising tensions and escalating concerns about the methods and practices of the Accrediting Commission for Community and Junior Colleges (ACCJC). The organization has accredited California’s community colleges for more than 50 years, but now faces losing the authority to put its stamp of approval on the two-year colleges.

In a major policy shift, California Community Colleges Chancellor Brice Harris and a task force of administrators, faculty, trustees and accreditation liaisons have called for “the investigation of all available avenues for establishing a new model for accreditation.” In other words: Find a new commission. The recommendation is contained in the Chancellor’s Report on Accreditation, released in August.

“The time has come,” the report pointedly concluded, “for the California Community Colleges to address the wide range of outstanding and consistent issues that have been raised regarding accreditation and begin building a structure that is sustainable for the future.”

Task force member Stephen Blum, an attorney and a trustee of the Ventura Community College District, told Capital & Main, “We felt the current process of accreditation was simply not working and we thought long and hard about the conclusions we came to. It was our judgment that a new accrediting process would be better than more attempts at reforming the current one.”

“We are looking for an accreditor that will seek to improve the community college system, as opposed to tearing it down,” he added.

The task force report is the latest challenge to ACCJC, whose authority was battered by a ruling in the San Francisco City Attorney’s lawsuit over the City College of San Francisco’s (CCSF) loss of accreditation in 2013. The commission has also been plagued by conflict of interest charges over the ACCJC team’s evaluation of CCSF and by ACCJC-reform initiatives proposed by Assemblyman Phil Ting (D-San Francisco).

Task force member: “ACCJC was playing whack-a-mole with our institutions.”

In a “preliminary response” to the report, the Novato-based ACCJC gamely tried to push back against the task force’s loss of confidence in it.

“With all due respect to the work of the task force, it does not appear that the themes and findings from their work support the ultimate recommendation,” read the ACCJC statement.

In fact, the commission shows no sign of going away quietly. Commission spokeswoman Eliza Chan told Capital & Main, “It is not clear whether the task force considered the ACCJC’s recently completed three-year [2012-2014] review of standards and practices and resultant changes. Those standards and practices would address many of the recommendations provided by the State Chancellor’s task force. The new standards will be the basis for comprehensive institutional evaluations for reaffirmation of accreditation beginning spring, 2016.”

These, Chan said, include: “. . . accrediting new baccalaureate degrees at its community college member institutions; a new policy giving more time, without sanction, for institutions to address practices that do not meet established standards; and novice team members receiving better training to help them improve their skill as evaluators as the ACCJC adds new college peers to its evaluator pool.”

For its part, the task force identified nine major issues or themes that have arisen as the ACCJC has assessed the junior colleges’ academics, finances, facilities, technology and governance. Those themes were used to develop standards for the qualities desired in an accrediting organization. The task force stated that the Chancellor should investigate forming a single accrediting commission, with the community colleges possibly joining the Western Association of Schools and Colleges Commission, in keeping with the prevalent model for regional accreditation, or identify other regional accreditors for two-year colleges.

In response to the crisis, the ACCJC held a special public meeting on October 9 to discuss the task force report and to hear the perspectives of the community colleges.

It seems unlikely, however, that the commission expected to glean new ideas from this meeting, or even that it was counting on a break within the ranks of the colleges involved with the task force recommendations – after all, two-thirds of the region’s 113 colleges were sanctioned between February 2005 and July 2015.

When ACCJC sanctions result in a school losing accreditation, the school may close or, in the case of Compton Community College, be absorbed by another district. The school, located in Southeast Los Angeles County, lost its accreditation in 2006 and became a satellite campus for El Camino Community College, located in Torrance. Without accreditation, students are no longer eligible for federal and state financial aid programs, and their degrees become worthless.

The commission’s sanctions are perceived as driven by an institutional impulse to comply with federal mandates — rather than a desire for genuine improvement. According to the task force, “while an increasing federal focus on compliance and accountability has placed new pressures on all regional accreditors, the reaction of the ACCJC to these pressures has led to more frequent sanctions than those issued by any other similar body.”

ACCJC sanctioned two-thirds of the region’s 113 colleges between February 2005 and July 2015.

The task force held the ACCJC accountable for not meeting the Community College System’s expectations and needs, and noted that the ACCJC “sanction rate is approximately 53 percent, compared to approximately 12 percent sanction rates within the other six regional accreditors.”

“It’s a fallacy,” said Stephen Blum, “a common misunderstanding that you make schools better by closing, criticizing and punishing them. ACCJC was playing whack-a-mole with our institutions.”

Even ACCJC’s granting, earlier this year, of “Restoration Accreditation Status” to City College of San Francisco, may be too late to bolster ACCJC’s negotiating position. ACCJC’s website shows only one college — San Bernardino County’s Victor Valley College — coming to its defense in interviews with the local Daily Press newspaper.

“The community college system can accept no less than an accreditor that will work in a collegial and transparent manner to ensure the integrity and quality of its institutions and to protect the interests of the State of California and the students that the system serves,” the panelists wrote in their report.

The Chancellor’s office will now evaluate and recommend possible new accrediting agents to the Community College District Board of Governors by the spring of 2016, concurrent with the commission’s implementation of its new standards and practices. The task force recommended that the community colleges continue to work with the ACCJC until a new accrediting agent for the system is established — which could take years.

Only a year ago it seemed as though time was running out for City College of San Francisco’s 80,000 students. Now, with the Chancellor’s report and an array of state and national lawmakers lining up against the ACCJC, “it appears that change is in the offing,” according to Stephen Blum. “It is not a done deal, but the Board of Governors at the September meeting seemed to be very receptive and willing to make a change. This commission really does not work with the institutions in an open transparent, consistent and collegial manner and the conclusion is, ‘it is too far gone, let’s start over again.’”

Debra Varnado is the founder, editor and publisher of The Fifth Avenue Times Online Journal and Newsletter. Her work has been published by Oxford University Press, Tsehai Publishers and Distributors, StorySouth.com, Howard University, George Mason University and the Wave Community Newspaper.

Related Topics:Accrediting Commission for Community and Junior CollegesCity College of San Francisco
Up Next