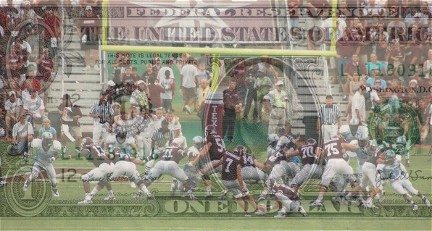 The L.A. Times had two interesting pieces on college football this last season. The second (don’t worry, I’ll get to the first), is an editorial calling on the NCAA to reform the sport by improving conditions for the so-called amateurs who generate millions of dollars every Saturday.

The piece calls for some sensible and straight-forward steps, largely echoing the basic demands of the National College Players Association, a project sponsored by the United Steelworkers.

Its heart, however, comes from a fantastic piece in The Atlantic by Taylor Branch, best known for his trilogy of books about the civil rights movement; if you haven’t read them, your life is incomplete. That gives him a certain moral authority in describing what he calls “The Shame of College Sports.” Go read this piece. It’s long, but worth it.

Okay, it’s long, and a lot of you won’t go read it. Seriously, what’s wrong with you? There’s good stuff in there, and I can’t summarize it all. The basic idea, however, is that college football players aren’t students but workers, and should be treated as such.

Branch makes this point not in the usual way of blaming dumb jocks for not studying, but by focusing on basic things like workers’ compensation or the right to legal counsel or the ownership of one’s image.

He tells stories like that of Kent Waldrep, a running back paralyzed while playing for Texas Christian University in the 1970s; TCU stopped paying his medical bills after nine months. And like the family of Ray Denison before him—Denison died in the 1950s playing football for the Fort Lewis A & M Aggies—he sought worker’s comp, but was rejected by the school and ultimately the courts. These are real issues, since kids are getting seriously hurt by working in dangerous conditions on the field and even off the field, and the schools apparently have no legal obligation to care for them.

Check Branch’s article out and you’ll have no doubt that something is seriously wrong in big time college sports, and it’s not, in the main, that entitled jocks skate by in school. Rather, it’s that college sports is a business using the fiction of school to cheat kids.

Which brings me to the other interesting article, in which the Times looks at spending in the Pac 12, and notes at the public institutions in the conference (the two private ones don’t have to report info), all 10 had to take money from their general fund to pay for their big time sports. More broadly, only 22 of the 120 largest athletic departments showed a profit in 2010.

The Times points out that this may change in the near future for the Pac 12 with a massive new television contract, but it raises the question: Who does the system work for?

It doesn’t work for athletes, who are abused and mistreated, and it doesn’t work for students at UCLA who have to pay higher fees to support the sad-sack Bruins (sorry UCLA fans, but they stink). It works, I think, for the $9 billion NFL, which gets a free farm system (baseball and hockey are college sports, but most players go through a professional farm system where the leagues spend millions to train prospects before they hit The Show) and perhaps it works for Disney and ESPN, who exist in no small part to show college sports. And, as Branch’s article shows, it works for the NCAA itself, a tenuous private institution that has turned itself into a generator of $1 billion despite serving no useful function I can determine.

There are lots and lots of reforms to be made, but as is usually the case, real change will come only when the workers in question have some power. The USW program to organize players linked to above is a start, but I’d like to make another suggestion.

About 10-15 years ago, resident SEIU genius Stephen Lerner wrote a much-circulated memo about how to transform the labor movement. The memo was an influential call to action, with its core message that unions could turn the tide if they dedicated resources to organizing, and if they focused on building density in core industries, rather than organizing hot shops or attempting to represent a few workers in a range of industries (it seems cute now that this came from SEIU, doesn’t it?).

So in that light, I offer up a modest suggestion: the NFL Players Association, fresh from their fight for a fair contract with the NFL owners, should take up the fight to represent college football workers. In recent years, thanks to the new leadership of DeMaurice Smith, the NFLPA has become a genuinely progressive trade union, working with unions like UNITE HERE to fight for justice for hotel workers and football players alike, reaching out to civil rights leaders and community organizations, and generally attempting to create a real social movement. They did a great job in the most recent negotiations, out-manuevering some very smart and very rich people. If they want to continue to grow, why not take the next step? Let’s make sure all football workers have the right to health care and safe conditions and a decent living.

Great Divides: How the Other Thirds Live