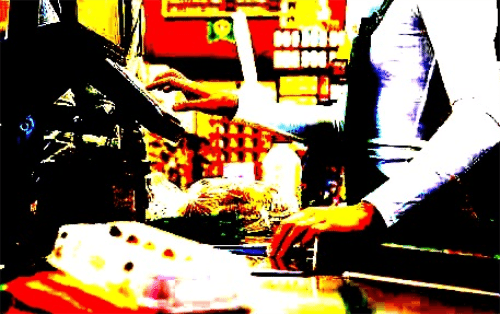 There was a time, not all that long ago, when a supermarket job was seen as a turnstile to middle-class security, especially if the job was in a unit of the old Retail Clerks Union. Today, however, even that seemingly bedrock bridge to the American Dream is vanishing into thin air as massive retail hypermarkets and nonunion grocery stores knock down wages and job benefits. A survey released this month confirms the acceleration of this trend and identifies even more problems that lie ahead for California’s grocery workers.

Shelved: How Wages and Working Conditions for California’s Food Retail Workers Have Declined as the Industry Has Thrived, commissioned by the Retail Clerk’s successor, the United Food and Commercial Workers union, was conducted by Saru Jayaraman of the University of California, Berkeley’s Food Labor Research Center. Her work here reveals a familiar pattern present among nearly all U.S. industries: While sales in the state’s grocery business have annually increased by two percent, employees’ real wages have nosedived 24 percent since 1990. This has produced a cruel paradox In California, where nearly 400,000 workers are in the grocery business: The three percent of the state’s private-sector workforce that is involved in selling groceries is finding it more difficult to buy food. Nearly a third of this industry’s workers depend on state assistance such as CalFresh or MediCal to meet basic nutritional and health care needs.

The U.C. report claims to be the most comprehensive study of the state’s retail food industry. The 124-page document goes beyond wages and also says that employee working conditions have deteriorated in the past 20 years. Since food retail is one of those industries that can’t be outsourced overseas, falling wages and the declining quality of workplaces should come as a surprise.

As Jayaraman’s report shows, these phenomena are being driven not only by the rise of nonunion discount grocery chains, organic food markets and ethnic supermarkets, but by a new player: the general merchandise store that sells food. While many of us don’t normally think of dropping by Walmart or Target to pick up a pack of chicken tenders or packaged spinach, an increasing number of Americans have been doing just that. And no one is a bigger pro at driving down wages and depriving workers of the benefits their parents took for granted than Walmart, whose attitudes toward labor would make a 19th century robber baron blush.

But not all retailers are in this camp. The reports demonstrates how the enlightened Costco chain pays good wages and benefits to its workers – and in return reaps the benefit of high worker productivity and low turnover, as well as a higher state market share than Walmart. Yet if Costco is a ray of light, it shines virtually alone in a darkened landscape of cost-cutting, according to Jayaraman:

Costco, which has captured a larger grocery market share than Walmart and Target in California, operates with a higher wage, higher quality labor model. Nevertheless, Walmart and Target’s low-cost model has impacted the behavior of many of California’s long-standing unionized grocery chains, which have cited Walmart’s expansion as a competitive pressure that has forced them to pursue similarly low labor costs.

The U.C. study is not the first to point an accusatory finger at Walmart and other bad actors, or to argue that the national plunge in union membership is a primary causal factor in today’s historically low wages and benefits. However, as Jayaraman said in a media conference when the report was released, what is new about the study is its discovery of the growing numbers of grocery workers having a difficult time affording the food they sell, and of “the dramatic increase in general merchandise stores selling food versus the decline of traditional markets.”

The study will have a very useful effect, too, serving as ammunition for two pending pieces of legislation. Assembly Bill 1792 (Gomez, D-Los Angeles) would publicize the extent to which individual retailers’ employees rely upon state assistance, while Senate Bill 935 (Leno, D-San Francisco) would tie the state’s minimum wage to the Consumer Price Index. In this sense a report with much bad news for Californians will be put to use to help bring them some good laws.