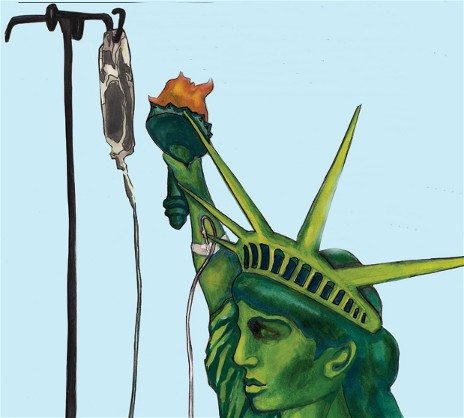 Physicians for a National Health Program

(In the following excerpt from his new book, Fighting for Our Health, Roosevelt Institute Senior Fellow Richard Kirsch notes that many small business owners support health care reform even if the organizations that claim to speak for them don’t. Used by permission.)

Small business is iconic in America. For years, big business has cleverly used small businesses to be messengers for campaigns financed by corporate America. And anti-government, free-market orthodoxy has dictated the policies of the leading small business associations, including the National Federation of Independent Businesses (NFIB). A powerful example of NFIB clout was the key role that the association played in defeating the Clinton health care plan. If we needed any reminder of that, President Obama asked the heads of just two lobbying groups, the NFIB and the health insurance industry, to speak at the White House health summit held shortly after his inauguration.

At Health Care for America Now, it was a lesson that we took to heart. As we planned our campaign to win comprehensive health reform, we knew that we had to be able to counter the attack from small businesses. Our strategy was to invest in a fledgling small business organization called the Main Street Alliance (MSA). MSA took traditional grassroots organizing and applied it to canvassing small businesses. Starting in 2008, MSA organizers went store-to-store in shopping districts of conservative Democrats in Congress who were likely to be swing votes once we got to the legislative fight in 2009.

The MSA organizers identified small business people who were angry at the health insurance industry for skyrocketing premiums and shrinking health benefits. As Rick Poore, the owner of a Nebraska business that designed custom T-shirts, told me, “Insurance companies are like potato chip manufacturers — they put less in the bag and charge more.”

MSA fulfilled its promise, with many of the small business owners it canvassed becoming powerful spokespeople and grassroots lobbyists. One of them, Dan Sherry, lived in the congressional district of Rep. Melissa Bean, a conservative Democrat from the Chicago suburbs. Sherry’s daughter went to high school with Bean. As part of the Health Care for America Now coalition in Chicago, Sherry joined fellow activists in running an aggressive and ultimately successful campaign to win Bean’s vote. Here is how Sherry’s story begins.

“If I had not gone to the doctor for a checkup, you and I would never have met,” Dan Sherry said as he shared his story on his 53rd birthday in August 2010. The doctor found nothing more than elevated cholesterol. Yet his insurance company’s reaction would turn Dan from an armchair activist into a national leader in the fight for health care, taking him to the White House, where he met the president, and to the steps of the Capitol, where Speaker Pelosi invited him to tell his story to the national press corps. Most important, he would sway his own member of Congress, conservative Illinois Democrat Melissa Bean. The complement to HCAN’s strategy of creating strong congressional champions was winning the support of “swing” members of Congress like Bean.

Sherry grew up south of Boston, and you can still hear a trace of a Boston accent in his voice. His wife Marcia’s family had a small business in the Chicago suburb of Evanston, making pet tags. Dan and Marcia both wearied of working for big corporations that left them with little control over their lives and decided to go into the family business. With 120 million dogs and cats in the U.S., they recognized the huge potential for growing the business. Within a few years, their revenues had grown twenty-fold. When the advent of big chain stores like Petco and Petsmart threatened their business, Dan opened up a trophy and award business. He even invented a board game to play with a dog that became the rage in the dog obedience world, called “My Dog Can Do That!”

Ironically, the explosive growth of their pet tag business caused Dan Sherry to lose his health insurance. In the summer of 2003 he received an order for 100,000 pet tags. In the rush of trying to deliver such a huge order, Sherry missed one payment on the high-deductible health insurance plan that he had been purchasing for 15 years. “With such a high deductible, we’d never used the insurance, even when our children were born. When I tried to make the missed payment, they said they first wanted to see our medical records. I hadn’t been to a doctor in years. And I’d even run the Chicago Marathon two years earlier. But in spring of 2003, I had decided to get a checkup and sure enough, they found high cholesterol. Since then I’ve had an MRI and my pipes are clean as a whistle. But the insurance company refused to cover me. It agreed to take my wife and children but jacked up our rates. I was left uninsured. I looked for other coverage, but once you get rejected, the insurance companies share their data. I went years without insurance and was really angry. Until you’ve walked in the shoes of someone without insurance, you don’t know what it means.”

In 2008 Jamie Meerdink, the Main Street Alliance organizer in Illinois, walked into Dan’s store and asked him to sign a petition to support health care reform. Sherry remembered, “Jamie asked if I had a story. His timing was perfect. I had just seen a lawyer who told me that the only way to protect my wife and kids from the medical costs that would result if I got seriously ill was to get divorced and give my wife the house, the car and all the savings.” Jamie invited Sherry to MSA’s first meeting in Illinois. “I had no idea of what I was getting involved in. I couldn’t tell if they were well organized or not. But I was intrigued about getting involved in a grassroots organization. You literally took someone who was feeling angry, alone, impotent, frustrated and took me to the steps of the Capitol and I’m really appreciative of the entire journey.”

Richard Kirsch is a Senior Fellow at the Roosevelt Institute and a Senior Adviser to USAction. He was National Campaign Manager of Health Care for America Now during the legislative battle to pass reform.

Taxing Logic: One Revenue-Cutting Trick Is a Real Laffer