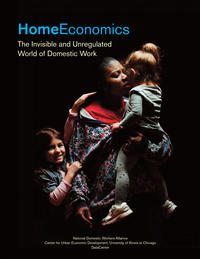 Domestic workers, such as caregivers and nannies, make all forms of other work possible and play an increasingly significant role in the U.S. economy. However, a new national study found, on average, domestic workers earn little more than minimum wage and few receive benefits like Social Security, health insurance or paid sick days.

Conducted by the National Domestic Workers Alliance (NDWA) and the Center for Urban Economic Development at the University of Illinois at Chicago, the study offers a startling and provocative look into the often-invisible world of domestic workers. Based on interviews with 2,086 workers across the country, researchers found domestic workers face serious financial hardships and have little control over their working conditions.

As a critical part of the U.S. labor force, domestic workers help thousands of working families by enabling them to focus on their jobs. Yet, they are often paid well below the level needed to adequately support their own family. Forty percent of workers report having paid some of their essential bills late in the previous cycle and 23 percent are unable to save any money for the future.

One worker featured in the report, Anna, reveals how she was “originally promised $1,500” to work as a live-in nanny in Manhattan but received less than half that amount, averaging “just $1.27 an hour.” According to the report, “Anna sleeps on the floor between the children she cares for, so she is the first to respond to their calls and the last to see them off to sleep.”

Anna’s story exemplifies how the absence of legal protections for domestic workers shapes the systemic substandard pay and conditions they experience. Domestic workers are excluded from federal and most states’ minimum wage laws, as well as by unemployment insurance, anti-discrimination and workers’ compensation laws. They also are excluded from the right to organize and collectively bargain for better wages and working conditions.

Additionally, the majority of domestic workers are women of color and immigrants, a number of whom are undocumented. Researchers found wages differ significantly across ethnicity and immigration status.

At the launch event for the report’s release, Ai-jen Poo, the director of NDWA, said, “The nature of work is changing [in today’s workplaces]. We need 21st-century policies that value the dignity of domestic work.”

The study calls for the end of the exclusion of domestic workers from labor laws, including state minimum wage laws and workers’ compensation. Without access to collective bargaining and legal protections, domestic workers remain vulnerable in today’s workplaces.

However, nannies, household cleaners and other domestic workers both in the United States and abroad have organized for years to raise labor standards and improve working conditions. New York became the first state in 2010 to legislate a Domestic Workers’ Bill of Rights, granting overtime pay and other legal rights. Today, domestic workers around the nation are continuing to advocate for similar laws in other states.

In an effort to help raise labor standards for all working people, the AFL-CIO formed a national partnership with the National Domestic Workers Alliance in 2011. Through advocacy and organizing at both the local and state level, domestic workers are joining together with the union movement to help build power for working families.

And After Walmart's Black Friday?