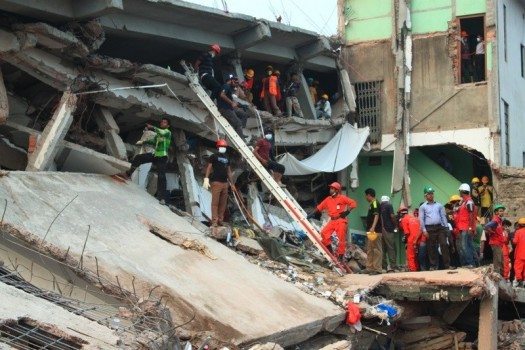 (Note: Jason Motlagh writes about the lack of compensation for the families of Rana Plaza victims for The Nation, where this post first appeared. Republished with permission.)

This week United Students Against Sweatshops (USAS) is holding demonstrations at more than 30 colleges and universities across the country as part of an International Week of Action to End Deathtraps commemorating the six-month anniversary of the Rana Plaza building collapse in Bangladesh.

Students and workers are demanding that apparel brands who produce apparel for U.S. universities sign on to the Accord on Fire and Building Safety in Bangladesh, a legally binding agreement now signed by over 100 brands and retailers, promising greater protection for workers and a voice for unions in addressing deadly working conditions. To date, not a single college-producing apparel company has signed the agreement. Bangladeshi unions are also holding demonstrations at the site of Rana Plaza collapse.

“When a disaster like Rana Plaza happens it is important for us as students to remember the dead and fight with the living to ensure that apparel brands like VF Corporation and Adidas take responsibility for worker safety in their factories. These disasters are entirely preventable; it’s up to our university to require the brands we do business with to sign the Bangladesh Safety Accord and end deathtrap factories in their supply chains,” said Katherine Corbit, a student at the University of Michigan.

Meanwhile, a minority of U.S. brands and retailers led by Gap, Walmart and the VF Corporation in July attempted an end-run around greater regulation when they unveiled a corporate-run safety scheme called the “Alliance for Worker Safety.” Students and labor unions have slammed the program for its exclusion of worker representatives and lack of legally enforceability.

“We will demand our universities terminate contracts with any college-logo brand that joins Gap and Walmart in playing public relations games with workers’ lives. The stakes are too high for our universities to stand on the sidelines—we must require brands like VF Corporation and Adidas to sign the Bangladesh Safety Accord,” said Caitlin MacLaren, a student at New York University.

USAS is now gearing up for the next phase of its campaign to publicly shame companies that refuse to address safety concerns.

Conservatives Are Crying – All the Way to Victory