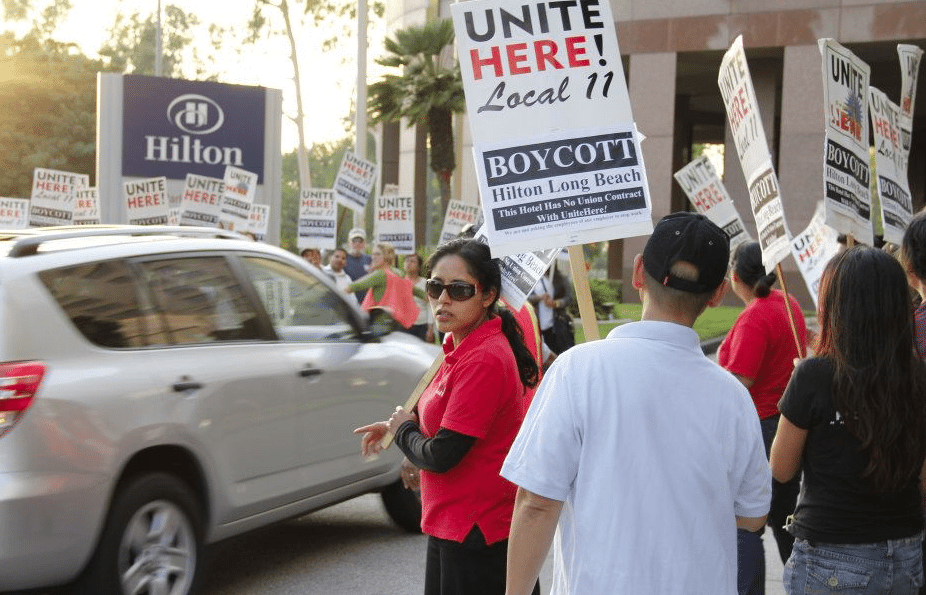 Editor’s Note: The Press-Telegram holds an annual awards ceremony,  “Amazing Women of Long Beach.” This year, the newspaper chose to host the event at the worker-boycotted Hilton Long Beach. Responding to their choice to hold the event there, the Long Beach Coalition for Good Jobs and a Healthy Community chose to host a simultaneous event outside the hotel honoring “Inspiring Activist Women of Long Beach.” Some of the activist honorees were slated to receive an award from the Press-Telegram inside the hotel but declined – choosing to support the boycott instead. Daleth Caspeta – a Dream Act Activist and honoree – shares her experience with The Frying Pan.

As I read this quote, I began to reflect upon the many reasons to keep fighting for justice. Not just standing up for myself, but for others as well.

There is no reason to be afraid. I am not doing this for myself but for something that is much greater than me. The people give me courage. Without them, there is nothing. This is the mantra that kept playing in my mind the evening of September 15, 2011.

The working conditions that workers at the Hilton Long Beach have had to endure are unacceptable. The Press-Telegram’s decision to support a hotel that has been the subject of a boycott for two years is not only unacceptable but shameful as well.

This is the reason why, when I went onstage at the Press-Telegram ceremony, I decided to speak about conditions at the hotel rather than accept an award. Even though I was filled with anxiety and stress, I was also aware of the impact that my actions were going to have on the hotel workers’ movement. Reciting, on the stage, the last phrase of the Pledge of Allegiance, “with liberty and justice, for all,” filled me once again with the determination and sense of righteousness that allowed me to pull through the nerves. After listening to these final words, something inside me clicked and a soothing calmness washed over me.

The sadness and misery were visible on the faces of the hotel workers that served us dinner that night. The time to act was now. All of the faces surrounding me at the dinner table reassured me, giving me the courage to walk up to the stage, take the microphone and stand up for justice.

I was surprised at the reaction. The people in front of me cheered as I stated that I wouldn’t support an unjust institution like the Hilton Long Beach. No one took me offstage; I was allowed to speak. However, as the rest of the team and I marched out yelling “Boycott Hilton Long Beach,” a member of our group who was carrying a banner was grabbed by the collar of his shirt. Luckily he was able to get himself loose.

As we walked out with high spirits, we were embraced and welcomed with open arms by the true amazing people of Long Beach.

Best Laid Plans: Getting the Biggest Bang for Tax Bucks

Comrade Carol: Our Gal in Havana