From time to time we may gripe about individual stories or columns that appear in the Los Angeles Times, but it remains our city’s paper of record and a powerful source of investigative journalism – at a time when such journalism has rapidly given way to rumor-sourced blogs written by dilettantes or pundits. That the Los Angeles Times may become the private toy of America’s most partisan conservative interests is not just a bad dream — right-wing billionaires Charles and David Koch may actually soon be running the paper, and it’s up to all of us to stop them.

It’s difficult to overstate how damaging it would be if the Koch brothers succeed in buying one of the country’s most influential newspapers. The Koch brothers would almost certainly use the Times to promote their ultra-conservative agenda. That would mean the end of fair, objective reporting on the key issues of our time, from economic inequality to environmental protection to gay rights to health care.

A broad coalition has come together to stop the Koch brothers from assuming control of the Times. Our fight will not be an easy one, for the Kochs aren’t the only advocates of feral capitalism waiting in the wings – News Corp. billionaire Rupert Murdoch is also said to be a possible bidder for the paper.

We invite you to join us for a critical rally Tuesday, May 14, noon, at 333 South Grand Avenue, downtown Los Angeles. (Oaktree Capital Management is located there and has significant ownership in the Tribune Company, the L.A. Times’ parent company.)

Roxana Tynan, the Los Angeles Alliance for a New Economy’s executive director, will be among the speakers. 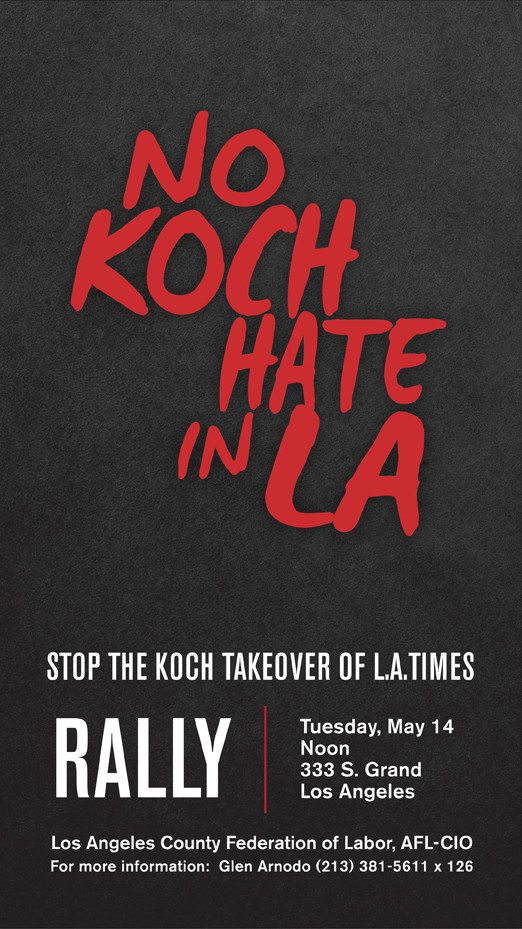