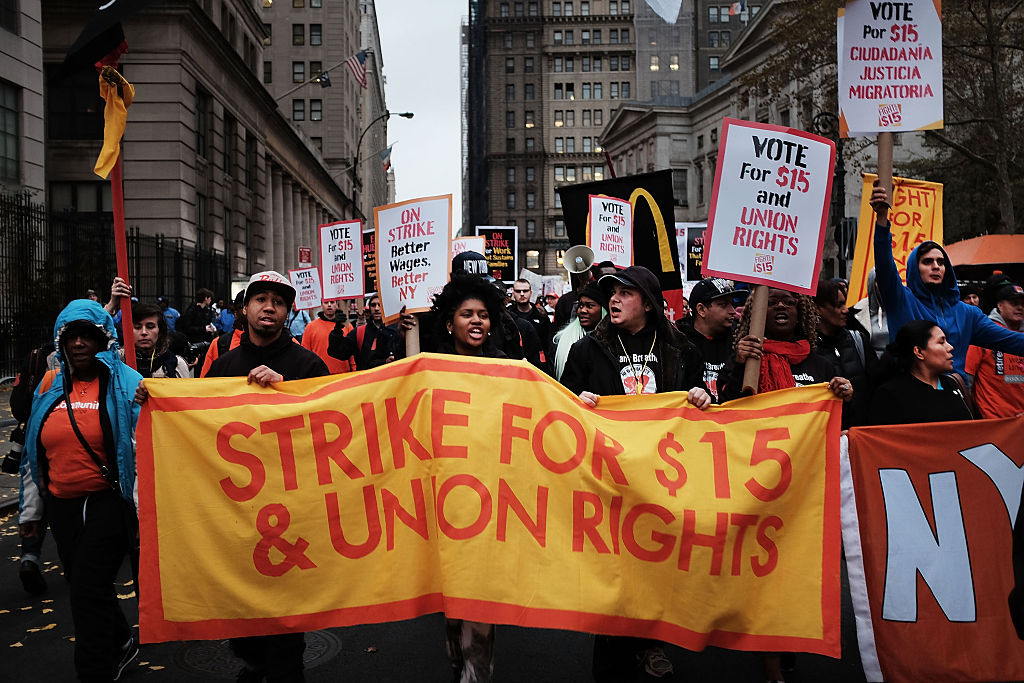 Workers and supporters protest for a $15-an-hour minimum wage on November 10, 2015 in New York City.

Author Steven Greenhouse is convinced that too few Americans fully understand what, he says, “unions have accomplished for tens of millions of workers in the United States.” It’s a central inspiration behind his new book, Beaten Down, Worked Up – The Past, Present and Future of American Labor. Greenhouse, who covered labor and workplace issues for the New York Times for 19 years, provides a dynamic picture of labor’s role in advancing income equality and workplace protections in the United States – from teenage garment workers in New York fighting for a 52-hour week in 1909 to the current struggle for a $15 minimum wage, even as union membership has declined to just 10 percent of the national workforce.

Greenhouse recently spoke with Capital & Main. The interview has been edited for concision and clarity.

Capital & Main: In your book you report on some of the most energetic and effective labor organizing campaigns in recent years. You also outline the decline of union power over the last few decades.

Greenhouse: One of the reasons I wrote this book is that there’s a phenomenon that far too few Americans understand. Worker power in the United States, not just union power, but worker power overall, has fallen to its lowest level, certainly since World War II and probably since the Great Depression.

That has hurt tens of millions of Americans because it’s a big contributor to wage stagnation. Consumers don’t have enough money to spend. That’s depressed the economy a bit.

A third bad result of the decline of worker power is that corporations have undue domination of our nation’s politics and policymaking.

In the 1950s unions were vigorous—nearly one-third of American workers were union members—how did labor become so strong? We all learned about the Great Depression in school. One in four Americans were unemployed. Wages were going nowhere. Unions at the time were very weak. President Roosevelt and the New Dealers thought–how could we help lift the nation out of the Depression? One way would be to put more money in workers’ pockets.

There was an idea that the federal government could pass a law to make it easier for workers to unionize. They’ll bargain, they’ll win better contracts, bigger paychecks, they’ll put more money in their pockets. That will create a virtuous cycle that will lift industry, because more people will be hired, and thus reduce unemployment. In 1935, President Roosevelt and Congress enacted the National Labor Relations Act, which gave workers a federally protected right to unionize.

[Unions] made some landmark contracts and settlements, especially in 1950 with the United Auto Workers and [UAW leader] Walter Reuther reaching a five-year contract with General Motors. That so-called Treaty of Detroit between the UAW and General Motors, which was then the world’s largest corporation, really went far to set a pattern that created the world’s largest middle class.

But later labor’s strength declined drastically. Fast-forward a few decades to the 1981 air controllers strike under President Ronald Reagan that ended up with the union, PATCO (Professional Air Traffic Controllers Organization) being decertified. Was that a labor turning point?

[In] 1981, all sorts of bad things were happening to the economy. During the 1970s, inflation rose by over 10 percent some years. Come 1980 and 1981, the Federal Reserve raised interest rates to 20 percent [and]  a very severe recession [followed]. You saw financial losses for many American companies. They thought, “What do we do?” One thing they did was take a much tougher attitude toward unions. One could say that unions were swaggering and powerful in the ‘50s and ‘60s, and even into the ‘70s, but in the ‘80s it was management that went on the offensive.

Adding to all that, in 1981 the air traffic controllers went on an illegal strike. They went on strike without trying to get any solidarity, any support beforehand from other unions. They had very ambitious demands, raises twice as big as other federal employees, and to go from a five-day week to a four-day week. The Reagan administration just said, “You’re asking too much from folks. You’re asking far more than other unions,” and fired  11,300 air traffic controllers.

It was a severe blow for labor. The President of the United States for the very first time fired [striking] workers and basically decommissioned their union. It sent a message to corporate executives across the country.

Scott Walker and his billionaire backers and Republican allies really wanted to weaken public-sector unions because they saw that unions help Democrats win. And some of the public-sector workers in Wisconsin had some good things in their contracts. They didn’t pay premiums on their health coverage. They had good pensions. This was right after the Great Recession. A lot of private-sector workers are hurting.

Walker used his rhetoric and the great legislative majority that the Republicans rolled up in Wisconsin to push through this law that has hugely hobbled public-sector unions in Wisconsin. Then he also had the legislature pass an anti-union fee bill, which some people call a right-to-work bill, and as a result in the past decade union membership in Wisconsin has fallen by 43 percent.

But you do tell some hopeful stories of successful labor fights.

In my book I look at the decline of unions and how that’s hurt Americans. Then I devote several chapters to looking at models for rebuilding worker power. One of them is the Culinary Union in Las Vegas. While many unions have declined in size, the Culinary, which represents hotel casino workers, hotel housekeepers, dishwashers and waiters, has risen from 18,000 members to 60,000 members. (Disclosure: The Culinary Union is part of UNITE HERE, a financial supporter of this website.)

Another model is the “#RedforEd” teacher strikes in these red states where teachers’ unions are quite weak. The teachers got fed up with year after year of wage freezes and having to pay more for health-care premiums. They used a new model of mobilization – Facebook pages, meetups – and created this powerful movement to fight back against austerity.

And what about the Immokalee, Florida tomato pickers who eventually led successful boycotts to change working conditions?

The tomato pickers in Florida were horribly exploited. Terrible sexual harassment. They made very little money. They worked in the very hot sun without clean water, without toilet facilities, without shade. Strikes didn’t work because it’s very hard for very poor laborers to go on lengthy strikes to beat corporations. They came up with the idea of boycotts against some of the biggest tomato buyers like Taco Bell. By pressuring these big companies through boycotts, they got the companies to pledge to pressure the tomato growers to pay better, to treat their workers better. That’s become a wonderful model.

The Fight for $15, a $15 minimum wage, is another type of model. The Service Employees International Union, which underwrote [the campaign] wanted to change the conversation to make the nation focus more on the problems of low-wage workers. There are tens of millions of low-wage workers having problems making ends meet. The SEIU knew it would be hard to unionize these tens of millions, but it would be easier to mobilize lots and lots of workers to decry low wages. (Disclosure: SEIU is a financial supporter of this website.)

I covered the very first Fight for $15 strike on November 29, 2012, when maybe 200 workers went out at 20 restaurants. That was a tiny, tiny acorn and I didn’t think it was going to go very far. Now you have California, New York, Illinois, Maryland, Massachusetts … Seven states have passed a $15 minimum wage. Thanks to the Fight for 15, wages have increased for 22 million workers.

There are models that are succeeding, but they’re still not as powerful as the great UAW was in the 1950s when it was achieving these landmark deals. I think these examples all point to the importance of trying to expand worker power to help create a fairer nation and a fairer economy.