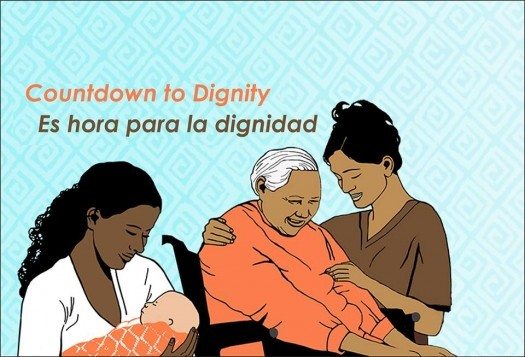 Domestic workers in California — and groups and people who support better employment conditions for them nationwide — are hailing a new bill of labor rights signed into law Thursday in Sacramento.

The signing of AB 241 ensures that domestic workers in private homes are paid overtime for the hours they work.

The law goes into effect on January 1, a year before similar but federal regulations announced this month begin, California state Assemblymember Tom Ammiano said in a statement. He is the main author of the bill.

“This is a big step for respecting and recognizing domestic work as real work, and the fight doesn’t stop here,” Marcela Escamilla, a San Francisco domestic worker, said in a statement released by Mujeres Unidas y Activas.

“The fire for this movement will now burn brighter for domestic workers across the country fighting for the same recognition.”

Mujeres Unidas y Activas, based in the San Francisco Bay Area, is a community group made up of Latinas.

The California law, known as the Domestic Workers Bill of Rights, caps a seven-year effort by community organizers and national advocates to give home caregivers labor protections that are enjoyed by nearly everyone else in the state.

The new law — as well as a photograph of smiling caregivers at the bill signing with California Gov. Jerry Brown — sparked a flurry of joyful reactions on Facebook, Twitter and other social media platforms.

Ai-jen Poo, director of the National Domestic Workers Alliance, sent this note to her followers on Twitter: “Cannot stop crying tears of joy & pride. After 7 years of hard work & two vetoes, finally a victory for domestic workers in CA #AB241.”

People from around the country sent congratulatory notes to her and other advocates working for better labor conditions.

Supporters said the protections would apply to about 100,000 to 150,000 domestic workers in California.

After California lawmakers cleared it for the governor’s signature, Rosa Sanchez, a caregiver from Los Angeles expressed joy.

“This vote shows that we are not alone and that our voices are being heard,” she said in a statement.

California has regulated domestic work since 1976 but the basic labor guarantee of overtime escaped them because what they did was viewed as “a source of rewarding activity” or “merely supplemental income,” supporters said.

Caregivers who work in other people’s homes allow scores of other individuals the opportunity to be employed at workplaces in various industries. Relatives of those who are receiving care at home know there is professional assistance to help with daily life.

“Domestic workers are primarily women of color, many of them immigrants, and their work has not been respected in the past,” Ammiano, the bill’s main sponsor, said in a statement.

Added California state Senator Kevin de Leon: “These tireless women have fought bravely for basic worker protections that many of us take for granted.”

Under the California law, the protections will last for three years, unless the state legislature extends them. A committee will be established to study and report on the effect of the overtime protections.

On September 17, the U.S. government announced overtime and minimum wage protections for the nearly two million home health care workers in the country.

Since 1974, home health care workers have lacked federal wage protections because their jobs were seen, at the time, as on par with babysitters.

The legislative victory for California domestic workers also comes as community and labor advocates in the country push for increased hourly pay for fast-food workers.

Related Topics:AB 241domestic workers
Up Next