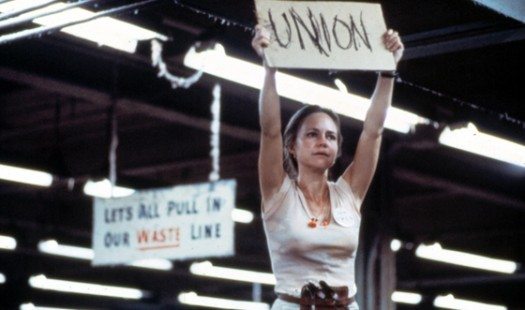 For all the talk of saving and rebuilding the middle class, no public official from the President on down has mentioned the U-word. The U-word? “Unions.” From the 1930s through the ’70s, unions turned working-class jobs into middle-class jobs. Hourly wage earners organized themselves into unions that could fight for livable wages, health and retirement benefits, safety rules, job protection and on-the-job respect. These became such national standards that even in the historically  right-to-work states in the Deep South, many of these principles prevailed.

But for three decades those work standards have been under attack, wages have dropped — with benefits cut or stolen. Why is this happening? Because union membership declined as free trade agreements shipped those jobs off-shore, as business mergers stripped workers of health care, and as strategic corporate bankruptcies took away their pension funds. Workers have been asked to “give back” in order to keep their jobs from vanishing, only to have them disappear anyway.

The conventional wisdom usually attributes the decline of union membership to the bad image of organized labor – corrupt union bosses and the like. However, the only place labor has a bad image appears to be among newspaper writers and corporate moguls, because more than half of non-union workers say they would love to join a union. So if more than half the hourly-wage earning people in America want a union, why aren’t they in one?

Workers mostly don’t have a union because legislatures turned the rules of organizing the work place into an impenetrable maze. Twenty-four states now have passed some form of right-to-work laws that make it almost impossible to organize at a company, and the manufacturers – the ones who still have factories in this country, from autos to aerospace to farm machinery – have deliberately moved their operations to those states.

Where states don’t have  right-to-work laws, the National Labor Relations Board (NLRB) prevails. But over the years it has been hamstrung by limitations imposed by Congress. Plus the NLRB has developed its own set of rules and procedures which turned the organization that is supposed to protect workers who want to organize into a calcified and toothless bureaucracy. A very lucrative chunk of the legal profession now plays these rules like a fine-tuned violin, turning one rule against another and stretching out appeals for years. For example, a few years back a group of Rite-Aid warehouse workers in Lancaster, California finally received back pay and restitution of their jobs through a NLRB appeal but only after five years of living in legal limbo.

No wonder workers are terrified to stand up for themselves! People working paycheck to paycheck, struggling to raise a family, bear the brunt of corporate wrath and high-priced lawyers. Even if workers organize with a union supporting them, it takes years of living in jeopardy, and the unions will need to spend millions of dollars to win a single campaign. In 2008 the nurses at Saint John’s Health Center in Santa Monica wanted to form a union. It was their second attempt. They won this time, but only after a two-year battle in which off-duty activist nurses were banned from their hospital before and after their shifts, and had to hold secret meetings in the building’s bathrooms. After winning, it took another 18 months of negotiations to get a contract in 2012. The hospital spent millions each year fighting their own nurses.

Meanwhile in Canada, organized workers represent 30 percent of the labor force. While our northern neighbor has experienced the same pressures to shift jobs out of the country, its rate of union organization is almost three times ours. Why? Canada simplified the rules and implemented procedures that cut through the corporate reign of terror. If workers want a union, they simply sign cards saying so, and when 50 percent of the workforce in a company signs on, the company has to begin negotiating a contract. The corporation can’t drag the workers through a long process of forced meetings, expensive elections and prolonged appeals. It’s called “Card Check” and is simple and clear, plus cheaper and faster for both the companies and their employees.

If this country is serious about reconstructing its middle class, Congress must make it easier and safer for workers to organize on their own behalf. But don’t stand on one foot waiting for that to happen. In the meantime, the harassment and intimidation of employees will continue and families will suffer — but the effort to organize will go on because it is a struggle for justice.

50 Candles: The March on Washington