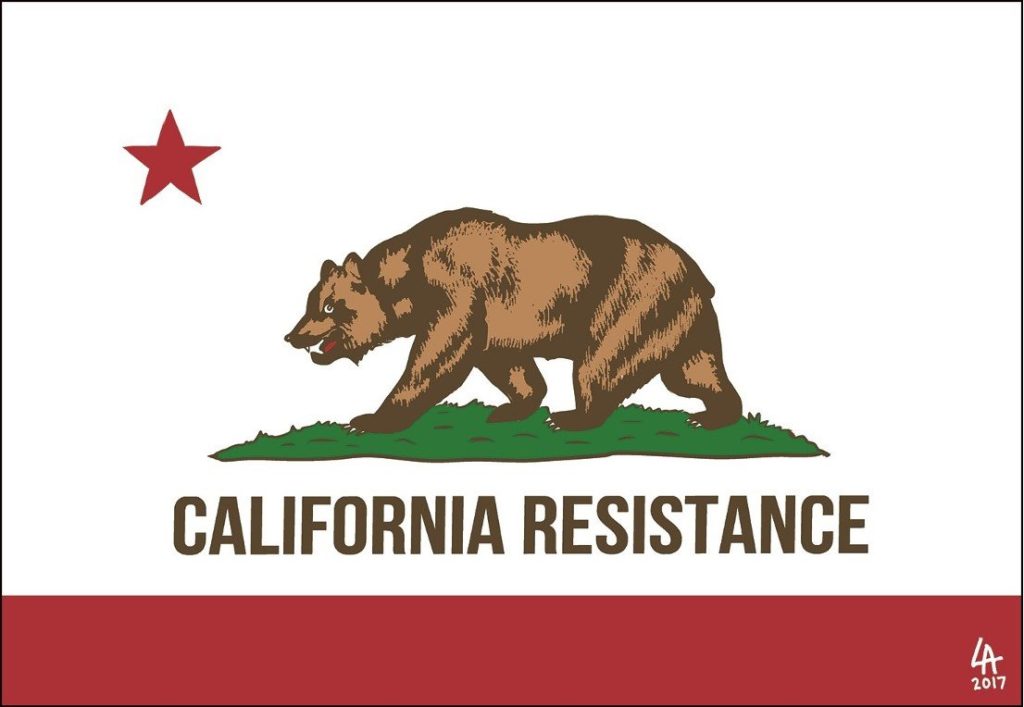 For the past two decades, California has been on the cutting edge of social and economic change in America. Now, with Donald Trump about to enter the Oval Office, the Golden State is poised to take on a new role: leader of the anti-Trump resistance.

California’s frontline position in opposing Trump is not merely a reflection of its deep-blue politics. On many of the flashpoint issues expected to define Trump’s presidency, California has a tremendous amount at stake. As the new administration tries to reverse the significant gains made on immigrant rights, climate change, criminal justice and workers’ rights, to name a few subjects, many of the fiercest battles in the country will be fought up and down the state.

Can California lead the resistance to Trump’s right-wing agenda and continue to be in the vanguard of advancing progressive change? Yes – and in fact, the two are inextricably linked, both tactically and symbolically. In the months and years to come, California must become like the best sports teams, capable of playing defense and offense at the highest level.

Why California Must Lead

No state rivals California either in the dimensions of its population or economy. At just under 40 million people, California has more residents than the nation’s 20 least densely populated states put together. Its economy is the sixth-largest in the world, trailing only the U.S., China, Japan, Germany and the United Kingdom.

California is also home to several of the nation’s most powerful and influential industries, including high tech and entertainment. Both Silicon Valley and Hollywood wield enormous economic clout, and are key shapers of consumer habits and cultural norms.

Why is this significant? Because California has the ability to exert enormous pressure on everything from markets and mores to politics and policy, a position it has ably demonstrated in its leadership role in addressing climate change, despite federal inaction.

Size and economic strength by themselves are not enough. But over the past 20 years, California has acquired another key comparative advantage: It has developed some of the most innovative social movements in the country – and exported them to cities across the U.S. These movements have secured rights for immigrants, boosted worker pay, protected LGBTQ Californians and pushed the state forward on addressing climate change. They will be called upon to use their organizing prowess to hold the line against Trump even as they continue to push the envelope of social and economic justice in California and beyond.

California advocates have succeeded in large part by mobilizing an incredibly diverse set of stakeholders. This will pay big dividends now, as very disparate groups of people – immigrants, Muslims, African-Americans, the poor, women, communities already suffering the effects of climate change – see their interests threatened by the Trump administration. The experience of working together across racial, ethnic, geographic and class lines will lend itself to the creation of even broader alliances – so broad that California could be a key base for the biggest and most diverse progressive coalition the nation has ever seen.

While California’s anti-Trump coalition will need to develop the capacity to fight many battles at once, one initial front will surely be immigration. If Trump makes good on his campaign promises, hundreds of thousands of undocumented immigrants will be faced with deportation, many of them DREAMers protected by the Deferred Action for Childhood Arrivals (DACA).

The economic, social and human costs of disrupting the lives of so many Californian families are staggering. Recognizing this, state and local leaders have vowed to resist efforts targeting immigrants, setting the stage for high-stakes confrontations with the new administration.

No less dramatic will be the battles over climate change. Governor Jerry Brown has vowed to oppose any efforts to roll back the state’s pioneering environmental policies (including a promise to have California launch its own satellites to gather information on global warming!), and he will be joined by a broad-based group of business leaders and activists.

Another flashpoint will be workers’ rights. Fast-food CEO Andrew Puzder is likely to be the new labor secretary: He is on the record as opposing increases in the minimum wage and expansion of overtime pay and is clearly no ally of those who seek to rein in the abuse of independent contractors and gig-economy workers. In California, the nation’s strongest labor movement, together with community and business allies, has enacted some of the most far-reaching worker protections in the country; we will need to stand firm on what we’ve won and stand strong against an assault on labor rights.

More broadly, unions face an existential crisis under a President Trump. Just last year, the Supreme Court heard a key case initiated out of the Golden State, Friedrichs v. California Teachers Association, in which anti-labor advocates sued to eliminate the ability of unions to collect dues for collective bargaining. Down one justice, the Court deadlocked – but since a tie sets no national precedent, another version of the same sort of case is widely expected to come up once Trump fills the open seat. Californians will have to be among those opposing any Court nominee likely to ignore worker, minority or women’s rights.

Another bone of likely contention: Trump can also be expected to push hard on a law-and-order agenda that will fly in the face of efforts to reform the criminal justice system. After recognizing its own disastrous infatuation with over-incarceration, California has embraced recent initiatives to reduce the sentences of nonviolent offenders and to ban labor market discrimination against former felons. This will be another policy battleground and will provide the opportunity to showcase a national counter-example to Trump’s fear-driven attempt to strengthen law enforcement at the expense of civil rights.

While California is well positioned to lead the charge against Trump, the success of these efforts is not inevitable. The challenges ahead include the risks of factionalism, the rise of extremism and the need to craft a new relationship with business forces.

When Richard Nixon was elected president in 1968, left-of-center political forces fragmented badly, expediting the rise of conservatism, which in turn has dominated national politics ever since. California’s progressive movement does not appear to be headed in this direction, but Trump has proven himself a master at dividing and conquering, and he will no doubt pursue the same strategy as president. He will also attack on many fronts, creating a strain on resources and the possibility of destructive in-fighting.

And although California may currently vote progressive, it is also no stranger to extremism. The descendants of the John Birch Society are alive and well, the Tea Party has its Golden State adherents and it’s worth recalling that Rush Limbaugh got his talk-radio start in Sacramento. With Trump in the White House, the right in general and the politics of hate in particular may well get a boost. The inland and rural regions of California have been the traditional breeding grounds for white nationalism, but the alt right is also operating in the state’s urban population centers.

Finally, some business leaders, lured by tax cuts, deregulation and union-busting, will be supportive of the Trump agenda even if they are repulsed by the anti-immigrant and anti-trade rhetoric. Other business leaders have a more balanced perspective, recognizing that a strong and sustainable economy requires that wages rise, racial inclusion occurs and the planet is protected. Progressives will have to figure out where alliances are possible and effective. This is particularly important in California, where some “business Democrats” often side with corporate lobbies on critical environmental and labor legislation. While several such elected officials found themselves unelected in 2016, others may be emboldened by Trump and his brand of scorched-earth capitalism. This could pose a serious risk to progressive priorities, even with the Democratic super-majority in the state legislature.

As Trump and his allies wage war on all fronts, a weariness may set in – and along with it a tendency to take refuge in California’s different political reality. That would be a very costly mistake. Not only must California help the country fight back, it must not take its own prolific advances for granted.

After all, it was only two decades ago that we were convulsed by our own anti-immigrant hysteria in the form of Proposition 187, a law that sought to strip all services, including education, from undocumented immigrants. It passed with an overwhelming majority, and the state soon followed with an electoral attack on affirmative action and aggressive efforts to criminalize black and Latino youth. And even as the nation voted for Obama in 2008, California voted for Proposition 8, stripping the rights of same-sex couples to marry.

We’ve come out of our political morass, not just because time has passed and demographics have shifted, but also because of a new hard-fought and hard-forged politics and social compact. With the nation now experiencing its own “Prop 187 moment,” we have a responsibility to help others avoid our own mistakes and accelerate the country’s path to a more inclusive future.

We will also need to lead by example. For all of California’s political progress, we still have one of the highest levels of inequality in the country, some of the most polluted communities, huge shortages of affordable housing, a massive homeless population, ongoing police brutality and one of the nation’s highest number of people caught up in the criminal justice system.

Even in the Trump era, California can tackle these problems – but it will require old relationships and new allies, solid institutions and innovative strategies, long-standing-values and a fresh and compelling vision of our future. All this will require a clarity of purpose, a level of passion and strength of resolve that few of us have been called on to summon.

So get ready. The battle begins now.

State of Resistance: Ten Californians Who Will Take on Trump