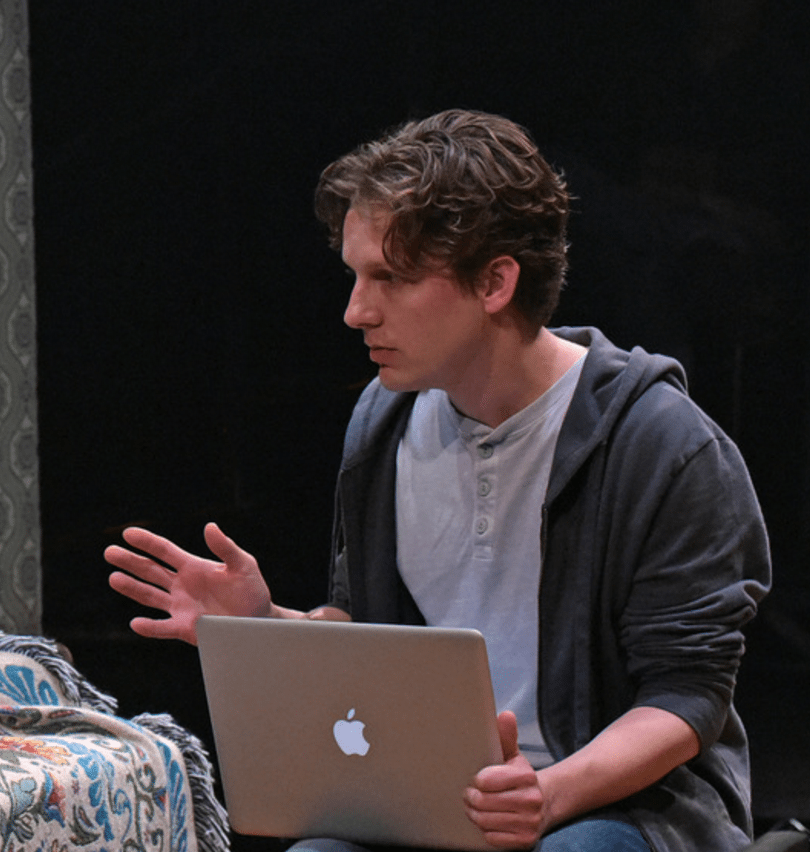 Jesse Eisenberg has carved a film career playing irritating nebbish-antiheroes in a host of roles. He even earned an Oscar nomination for best actor in the most memorable of these, as Facebook founder Mark Zuckerberg in The Social Network. But his artistic ambitions also encompass writing for the stage, and his second play, The Revisionist, opens with an engaging premise, albeit an unfulfilled one.

David (Seamus Mulcahy), a young American writer wrestling with a book revision, comes to Poland to visit a distant, aged cousin, Maria (Deanna Dunagan), a Holocaust survivor. Unfortunately, the two have very different notions of how David will spend his journey. Maria, a crimped pensioner who fills her lonely days watching CNN (to help with her English), envisions a chance to connect with a far-flung relative, to prepare him home-cooked meals and show him her town’s limited sights.

David, an avowedly secular Jew, has something else in mind: a short trip to a dreary place where he can at last concentrate on improving his book, free of distractions. This tension grounds the drama, but Eisenberg, who based the play loosely on an event from his own life, never advances it. Instead, we watch almost the same scene unfold repeatedly. The only mystery is how a narcissistic jerk like David ever got so far, as either a writer or a houseguest, and why kindly Maria puts up with his rudeness, their blood connection notwithstanding.

One answer to that last question actually lies in the play’s single inspired revelation (don’t worry: no spoilers here!), which gets to the heart of Maria’s need. But David’s solipsism prevents further exploration of this development and the show’s needlessly abrupt ending presents a serious structural flaw.

Eisenberg himself played David in the show’s New York premiere – in which no less than Vanessa Redgrave portrayed Maria – and one can certainly see the similarities between David and the stunted screen characters for which Eisenberg is known. That casting limitation necessarily restricts what any actor can do with David. Mulcahy tries to lend the part his own imprint, but it’s nearly impossible to get away from Eisenberg’s long shadow in this ultimately repellent role. David is a spoiled child in a young adult’s body, and nothing in the script makes us feel anything but dislike for him.

Dunagan’s Maria, on the other hand, elicits real sympathy, both for having to endure her ugly American cousin and for the horrors visited on her by the Nazis and her fellow Poles during World War II. Theater lovers will recall Dunagan as the creator of Violet Weston in Tracy Letts’ Pulitzer Prize-winning August: Osage County, for which she won a Tony. Here, Violet’s indelible fierceness is convincingly replaced by Maria’s touching, grandmotherly passivity. Kudos, too, for Dunagan’s sustained Polish accent and repeated, if brief, lines in Polish. Ilia Volok robustly limns the play’s only other character, Maria’s hulking friend Zenon, alternatingly helpful and menacing.

Local director Robin Larsen moves the players about the elongated stage with enough fluidity to retain our attention even during the play’s most static passages. But more credit goes to Tom Buderwitz, who designed Maria’s cramped apartment with remarkable attention to detail – from the all-important framed snapshots throughout her three rooms to the dingy, large-patterned wallpaper covering them. These things and others conjure Maria’s sad world far more compellingly than Eisenberg’s clichés do.

Related Topics:Jesse Eisenberg
Up Next