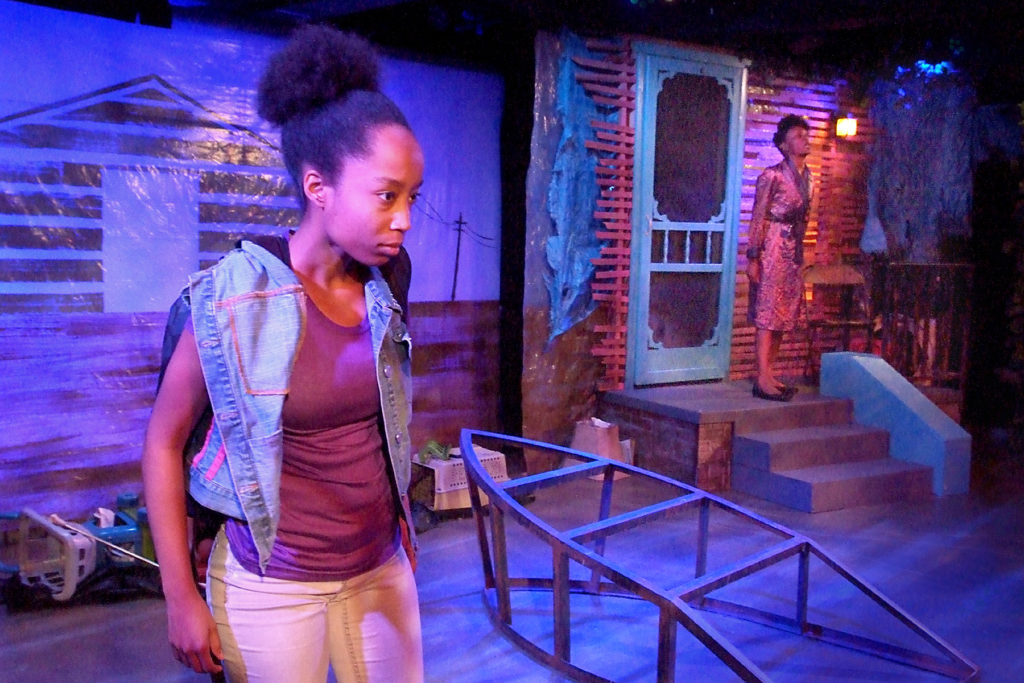 Directed by Shirley Jo Finney, Jeremy J. Kamps’ Runaway Home takes place in New Orleans in 2008 and revolves around a troubled 14-year-old runaway learning to survive on her own after a physical altercation with her mother prompts her to leave home. It’s a sound piece of writing, lyrical in places and with a historical backdrop that reminds us of the painful displacement and disrespect endured by poor people and people of color in the years following Hurricane Katrina. (An indifferent federal bureaucracy initially failed to step up to the plate, leaving homeless or under-housed folks with little or no assistance in rebuilding their lives.)

Kamps’s pivotal character, Kali (Camille Spirlin) is a kid with a quick mind, a diary full of poems and lots of attitude. She once won spelling bees in school, but the death of her beloved grandmother during Katrina transformed her into what her mom Eunice (Maya Lynn Robinson) calls “a little monster.”  After Eunice slapped her — she read Kali’s diary and found out she was pregnant — Kali slapped back. Now she’s on the run, scavenging where she can. She finds partial refuge with Armando (Armando Rey), a struggling local shopkeeper who offers Kali food after he finds her pilfering from his store. Her knowledge of survival skills broadens after she meets “Lone Wolf,” (Brian Tichnell) a young volunteer who guts houses to prevent the authorities from bulldozing them entirely. Lone Wolf calls himself an anarchist; he talks to Kali about dumpster diving, finding safe places to squat, and “liberating” goods from the local Walmart. This last instruction is significant because down the road Kali decides to “liberate” someone else’s gun, which turns out to be an unfortunate choice.

Back home Eunice, increasingly concerned about Kali, is being pressed by her neighbor Shana (Karen Malina White) to become part of a citizens’ protest group. Another neighbor, the elderly Mr. Dee (Jeris Poindexter, in a terrific performance), is sorting through his debris-filled trailer and reminiscing about the wife who left him for another after years of putting up with his dalliances.

Given its vital story and timely social context, Runaway Home should pack more of a punch than it does. The production has rich and satisfying sequences, most of them generated from the supporting ensemble: Poindexter as the lonesome, forgetful and emotionally untethered old man; White as the vigorously fired-up, mince-no-words-with-you Shana, and Robinson as the prickly Eunice, whose past pain and heartache are unabashedly laid out for all to see. Eunice has kind impulses too, as when she offers Mr. Dee a slice of cake she baked from her mom’s recipe — which he politely chokes down as she watches with benevolent intent.

These are wonderfully textured portrayals, but unfortunately the skill that fashioned them seems absent from Spirlin’s repertoire. Hers is a one-note performance in a pivotal role, smoothly rendered but too superficial to be involving. Plus, despite the cocky pose, she’s not a convincing teenager. One’s interest flags.

As to the production’s tech values, lighting designer Jennifer Edwards creates an intriguing effect in which Eunice’s head is reflected behind her in elegant silhouette. Her choice of hues is dramatically appealing, but at other times I felt there needed to be more light on the performers, who were sometimes too much in shadow from where I was sitting. Music by composer/sound designer Peter Bayne delivers an appropriately uneasy ambiance.

Still, whatever its shortcomings, the play is almost too timely for comfort.  Storms batter our coasts while climate deniers reign. We seem destined to repeat errors of the past, with the most vulnerable suffering once more from the folly of the powerful.

Related Topics:Hurricane Katrina
Up Next

Filipinotown Is Burning: A “House” Is Not a Home in Ball-Culture-Themed Play