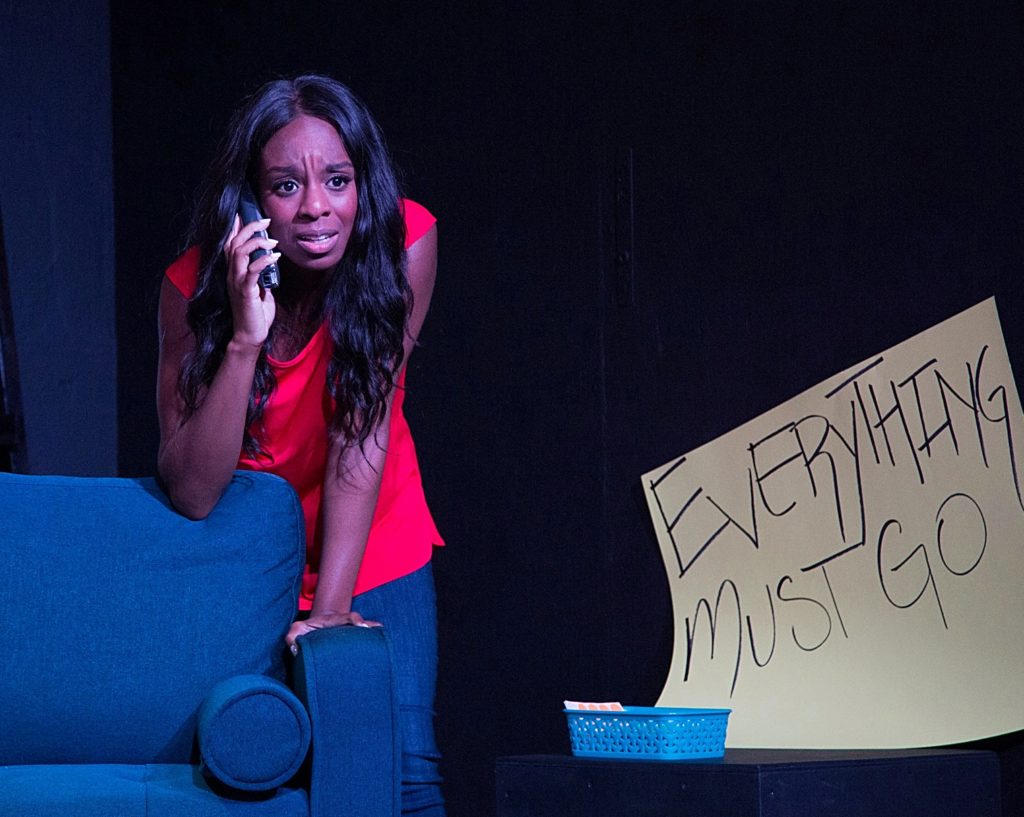 The 2007-08 financial crisis and the collapse of the housing bubble created lots of heartache for lots of people. Playwright Stephanie Alison Walker was among the one in 54 homeowners nationwide to receive a foreclosure notice in 2008. The experience prompted her to write American Home, a textured melodrama centered on a young couple whose lives come apart once they start to lose the house they love. The play weaves several similar stories into the mix, and places them in the context of a blame-the-victim mindset, fostered by right-wing media commentators and a “Christian” huckster hawking a gospel of prosperity.

Dana (Ozioma Akagha) and Mike (Jono Eiland) are happily married and have discovered a house they adore. Mike worries that it will stretch them too far, but Dana loves it and convinces him to take the plunge. But after Mike loses his job, they fall behind on their payments, and eventually are in such deep financial trouble that they have no choice but to sell. The ordeal wreaks havoc on their self-respect as individuals, as well as on their marriage.

Florence (Bette Smith), another homeowner in peril, is an elderly widow grown incapable of managing her finances. She’s so far eluded eviction thanks to the kindness of Robbie (Marc Barnes) a sheriff’s deputy who’s been instrumental in postponing the inevitable but can’t prevent it altogether. Meanwhile, newscasters (Jennifer Adler and Mel Green) are reporting on a desperate former homeowner (Carol Westheimer) who has chained herself, with a dog leash, to her property, as if somehow that will prevent the bank from seizing it.

Another plot thread involves Preacher Paula (Jessica Kaye Temple), a bejeweled and tireless sermonizer who tells her followers that God wants them to be wealthy and prosper, but that they need to help, the inference being that they need to donate to her coffers. She encourages one of her flock, Marcus (Ethan Rains) to trust the Almighty, buy a house and make his dreams come true. When it doesn’t work out for him, he confronts Paula for the disingenuous fraud that she is.

Although the narrative in American Home holds few surprises (and ties up too tidily), its characters are insightfully drawn, and the dialogue has an authentic ring. Director Kate Woodruff moves the performers about the set in a fluid way, and as the open-hearted and effervescent (until she isn’t) Dana, Akagha exudes presence and charm. She’s the show’s greatest asset, and holds our interest when other elements of the production do not.

The other solid performance comes from Rains, who makes Marcus’ disappointment and crisis of faith palpable. You can’t help rooting for him when he tells the preacher lady off, and you wish this character and his story had more stage time.

But other portrayals are less convincing. As Paula, Temple’s still shaky, not yet projecting the larger-than-life arrogance of this kind of con artist. Smith settles for shtick in depicting the cantankerous Florence, while Eiland’s Mike is adequate, but lacks interesting layers.

Also, while some plays do fine in bare-bones mode, American Home is one that might benefit from more elaborate tech, specifically a more sophisticated lighting design (the resources at this venue appear limited). Down the road, perhaps in a subsequent staging, some video images might broaden the canvas for a play with a telling comment on our shrinking middle class.