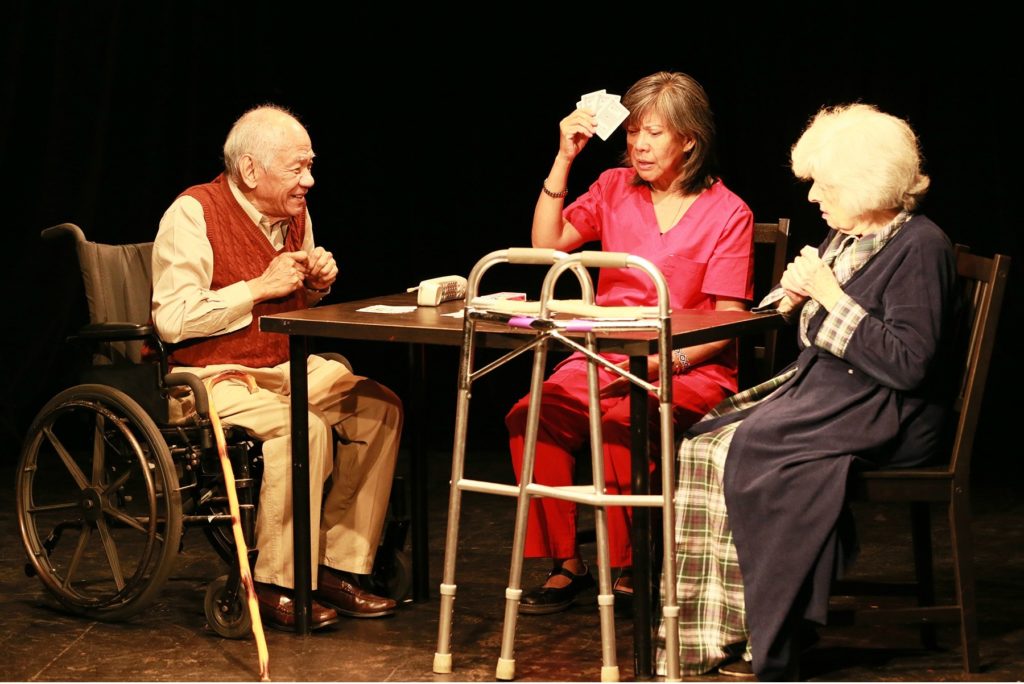 Most Americans have limited knowledge of the history and hardships of ethnic groups and nationalities outside their own (despite the best efforts of progressive educators in some of our urban schools to have it otherwise). With As Straw Before the Wind, Filipino-American playwright Felix Racelis aims to fill some of the gaps that audiences may have when it comes to the Filipino experience. His play informs us of the country’s participation in World War II on the American side, of the brutalization of its populace at the hands of the Japanese, and — in the telling of a contemporary story —something of the contribution of Filipino-Americans to our country today. Racelis is also looking to pay homage to some of the women of his mother’s generation who worked as nurses during the war.

The play is set in the San Gabriel Valley in 1993. Sixty-five-year-old Filipina immigrant Nene Santos (Tita Pambid), an RN, runs a small long-term care facility with the assistance of her thirtysomething daughter Pilita (Sarnica Lim), who works directly with the patients: changing bedpans, taking blood pressure and doing whatever else is needed to make these older folks comfortable. The residents include Poncing Enrile (Muni Zano) an elderly and cantankerous vet whose greatest pleasure is to pinch and make suggestive advances to the forgiving Pilita. The other resident, Mrs. Borcia (Mildred Novak) dwells mostly in the past with her dead husband Charlie; her fondest indulgence in the here-and-now is a sneaked cigarette, which Pilita provides, along with much coveted lipstick.

Nene’s main problem is that she wants to expand her business but lacks the capital to do so. She dreams of a gleaming new facility with many new residents, but is turned down for a business loan. She attempts to garner more income by double-booking Poncing’s room, but he protests vehemently, and at one point goes so far as to run away.

Nene’s other difficulty — one she hasn’t quite confronted — is her daughter’s intention to leave. The younger woman has had an offer of marriage from a man who tells her there’ll be no need for her to work. Pilita does her job at the care facility dutifully and well, but she’s ready to move on. Her mother, however, sees this as a betrayal, and reviles her for this.

Occasional flashbacks to the Japanese invasion of the Philippines and to the trauma and loss Nene underwent as a young girl help transpose the drama to a broader tragical realm.

There’s no question that As Straw Before the Wind has the fundamental makings of affecting social drama. The story includes characters in conflict, struggle within the family and without, and meaningful themes — among them, the plight of the elderly, sick and infirm, as well as the effort to apprise people of the contributions made to our country by Filipino soldiers, whose promises of reward for service were largely reneged upon by the U.S. government.

But some plot points seem rather reductive: Nene’s over-reactive rage to Pilita’s wanting to get on with her life (the younger woman can see 40, for heaven sakes!), or the suggestion of Pilita’s culpability when the old man falls into a coma. More significantly detrimental, however, are the last 15 minutes or so, which are never elevated to the grand drama the playwright so clearly is trying to achieve, but register instead as melodramatically overwrought and unconvincing.

As Straw Before the Wind, directed by Lesley Asistio, is best viewed as a work in progress. Tech values, including set, are minimal, although the lighting changes (lighting design by Jim Niedzialkowski) for the flashback scenes are effective, as are the video sequences (by Guillermo Aviles-Rodriguez) at the top which frame the story. There’s a lack of polish in the presentation overall; that said, Pambid is both believable and sympathetic as the harried Nene, and Lim is a kind and likable presence.