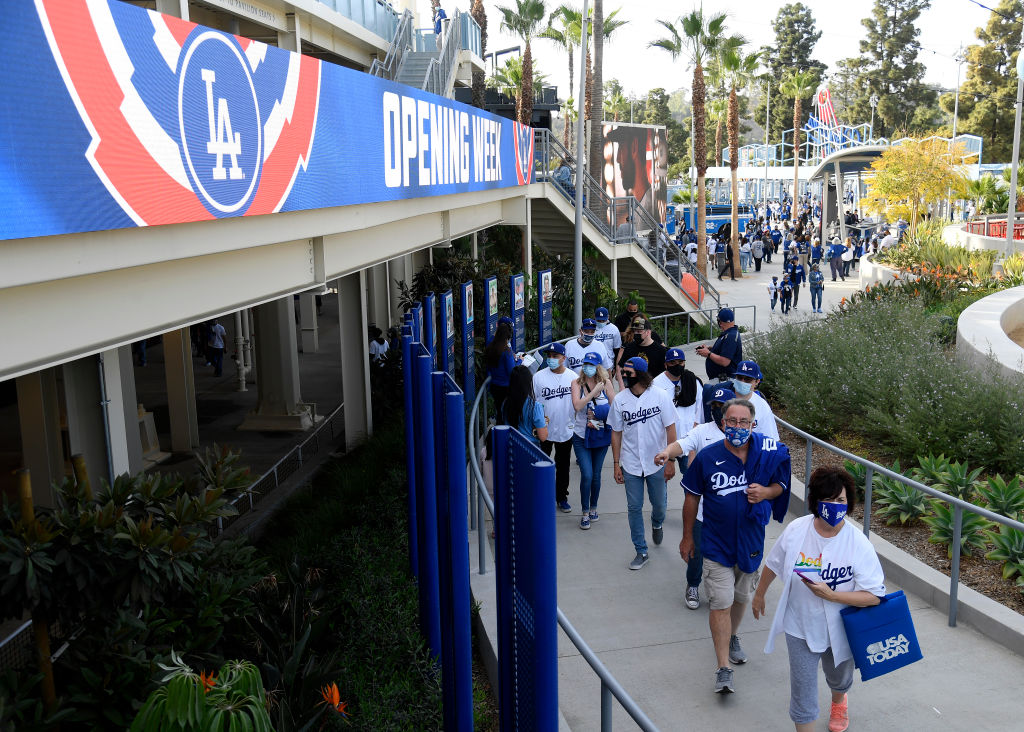 Dee Dee Reed was counting the days until she could start working again at Dodger Stadium in Los Angeles this past Friday. Reed, who lives just blocks from the ballpark, missed the sounds of the crowd, along with her colleagues at the stadium bar in which she is a manager — and the adrenaline rush when the home team scores a run.

“I’ve been there 30 years. I was 18 when I started,” explains Reed, whose father cultivated her love of baseball by taking her to games when she was a child. “I love my boys in blue [the Dodgers]. I love baseball.”

Yet, with the recent return of in-person sports events, Reed, who also used to pick up additional hours downtown at the Staples Center, is nervous about what this reality will mean for her. “I don’t know how it’s going to be,” she admits. “I know I’m going to wear a mask. I’m getting my second dose of the vaccine. I’ll keep social distancing. I want my income back. But we don’t know what to expect.” For the Reed family, Dodger Stadium is home. Her grown children work there. So, too, does her brother. Or, at least they had worked there until March 2020, when pandemic stay-in-place orders shuttered sports and entertainment venues around the state and country.

Thirteen months after the pandemic ground everything to a halt, California’s stadiums and arenas are navigating their way through reopenings. Dee Dee Reed and thousands of other seasonal employees who work for them face the dilemma of being caught between a jobless life without health coverage and returning to jobs that, despite the progress of the vaccination campaign, still carry with them the risk of coronavirus infection.

“All of us filed for unemployment,” she recalls of those chaotic days last spring when the season shuddered to a halt, adding that in addition to losing their jobs and their income, they lost their medical coverage when the stadium stopped paying for their health insurance. Thankfully, she says, her union, UNITE HERE, stepped in with emergency funds for continued coverage. Without that, she says, “Oh my God, I’d have had to go to Covered California and pay out of pocket.”

Others weren’t so lucky. Around the state, billion dollar sports stadium franchises immediately cancelled health benefits for their now out-of-work employees. Many, like Reed, worked multiple gigs at several different stadiums — and not all had unions behind them with the resources to pay members’ benefits. Even those covered by union trust funds – from UNITE HERE to Service Employees International Union and the International Alliance of Theatrical Stage Employees (IATSE) — found themselves having to pay their own insurance bills, or simply went without coverage when the union funds ran out on Dec. 1. (Disclosure: SEIU is a financial supporter of this website.)

Out of work and lacking health care access, Oracle Park employee Aurora Rodriguez took to sewing COVID masks but rarely made more than $100 a week and, even with additional house cleaning work, couldn’t afford to purchase insurance.

UNITE HERE estimates that statewide, 13,000 of its members in the hotel and food industries lost their insurance.

At some stadiums, including the baseball Giants’ Oracle Park, in San Francisco, workers picketed in an unsuccessful attempt to convince ballpark owners to pick up the tab on their lapsed health insurance. By contrast, elsewhere in the entertainment industry, some employers — in particular, Universal Studios – did continue to pay their laid-off workers’ health insurance premiums.

Like Dee Dee Reed, 37-year-old Aurora Rodriguez had been itching to get back to work this spring, not least because she wanted stable medical coverage once again. “I was very concerned,” says Rodriguez, who was a lead cook at Oracle Park, to which she commuted from her home across the bay, in Oakland, earning about $30,000 per year plus health benefits.

“It makes you feel very sad and frustrated,” the erstwhile cook explains about being furloughed. “We always try to make fans extra happy. We go out of our way. It’d be nice if they [the Giants] think for once of their employees.” Out of work and lacking health care access, Aurora took to sewing COVID masks but rarely made more than $100 a week and, even with additional house cleaning work, couldn’t afford to purchase insurance. Desperate, she stopped paying her rent – and while the eviction protections kept her family housed, Aurora says that she now owes her landlord roughly $5,000 in back rent.

The cities of Los Angeles, Santa Monica and Long Beach, along with Los Angeles County, have ordinances guaranteeing that workers who got laid off during the pandemic will be the first to be recalled. These ordinances have become a statewide standard.

“I have two kids, ages 6 and 16, one of whom has a chronic medical condition,” she says. “We have [doctors’] appointments, prescriptions we have to fill. I didn’t know what to do.”

After three months with no insurance, Aurora finally managed to get her family onto Medi-Cal, the state’s version of Medicaid; but during those three months her older son, who suffers from Tourette syndrome, went without his medications, and, as his condition worsened, he fell into a deep depression.

Today she worries that she won’t be offered enough hours to qualify for insurance: “With the pandemic, with the virus as it is, I’d rather get insurance sooner; without the fear of, ‘What if I get sick?’”

Under pressure from organized labor — which feared sports venue owners and other employers would use the pandemic as an excuse to break unions and hire on new, lower paid workers when the venues ultimately reopened — the cities of Los Angeles, Santa Monica and Long Beach, along with Los Angeles County, have all passed ordinances guaranteeing that workers who got laid off during the pandemic will be the first to be recalled. These ordinances have become something of a statewide standard.

Major League Baseball began its reopening-with-fans process with the opening of the new season earlier this month; other professional sports are planning launches over the coming weeks. By mid-June, which Gov. Gavin Newsom has targeted for ending all pandemic-related restrictions on the state’s businesses, the intention is to have pretty much everything up and running again. “We’re seeing plans develop rapidly here on reopening,” says Anand Singh, president of UNITE HERE, Local 2, based in the San Francisco Bay Area, and whose union represents many of these workers.

A disproportionate number of these low-wage workers, notably in the food sector, are Black and Latinx, says Singh, and their communities have been particularly hard hit by COVID over the past year. They were also devastated by the economic ramifications of the shutdown.

“It’s not the job of a cashier or attendant to enforce mask wearing. If people are drinking, frankly, it’s not safe.”

Now, coming back to work, they are especially worried about what will happen if strict safety protocols aren’t in place, or are not properly enforced. “We’re looking to establish stringent COVID-19 protocols,” avers Singh. “Sanitation plans, social distancing in crowded areas like kitchens, safety training for workers, contact tracing, meaningful, safe, appropriate enforcement of protocols.”

Singh is concerned that fans, especially if inebriated, might be reluctant to follow mask-wearing requirements, for example, and his union wants stadium owners to take the initiative on enforcement mechanisms. “It’s not the job of a cashier or attendant to enforce mask wearing,” he argues. “If people are drinking, frankly, it’s not safe.”

“We are,” says UNITE HERE Local 11’s Los Angeles-based co-president, Susan Minato, “fighting like hell to make sure that workers will be safe. It’s complicated — every workplace is different. It really depends on the employer; how much will they work with us?”

But the negotiations between union and management go beyond the exact nature of safety protocols. Health coverage remains one of the biggest issues in play. Most of the stadiums provide insurance only to workers who accumulate a certain number of hours during the previous month — or in some cases two months.

So as it stands now, when the stadium workers return to work, for at least the first month they will not be provided with health coverage. Unions are pushing to make sure that workers, asked to return to work while a pandemic is still raging, are at the very least provided insurance from day one back on the job. “Health care dominates discussions,” says Singh.

Capital & Main reached out to Major League Baseball, as well as to the Dodgers, the San Francisco Giants and the operators of several sports venues for comment for this story. None responded.

“We’re not sure how well we’ll be protected from our fans – or even from our co-workers,” Preston says. “I’ve had one vaccine shot; I haven’t had the second shot yet. But we’ve got co-workers who for various reasons haven’t taken the shot – or fans who might not take the shot. It’s alarming.”

But when he totes up the various risks that he is facing, Preston, who lost his medical insurance when the pandemic first hit, believes that prolonged joblessness has cast him into a bigger problem than his medical anxieties. “Are you going to meet your obligations in life or sit in the four walls of your home and be depressed because you can’t pay your bills?” he asks.

It’s a sentiment that Dee Dee Reed can relate to. As the pandemic raged, she says, she spent her time watching TV, reading and eating. She bought an exercise bike, but found it wasn’t as fun as going to her – then shuttered – gym; and so she stopped exercising. She began stressing over her lost income and eventually came down with shingles.

Now, she says, she’s ready to put all that behind her and start afresh. “You miss the sound of the crowd so much,” she says, sadly, speaking in the second person as she thinks of how much has been lost this year and dares to ponder a return to something approximating normalcy over the coming months. “If they didn’t have all that noise, it’d be so boring. You love hearing the cheers.”

On April 9, Reed got her wish. In front of a limited-size crowd, the Dodgers beat the Washington Nationals 1-0. She was there to hear the fans, from behind their masks, roar their approval.