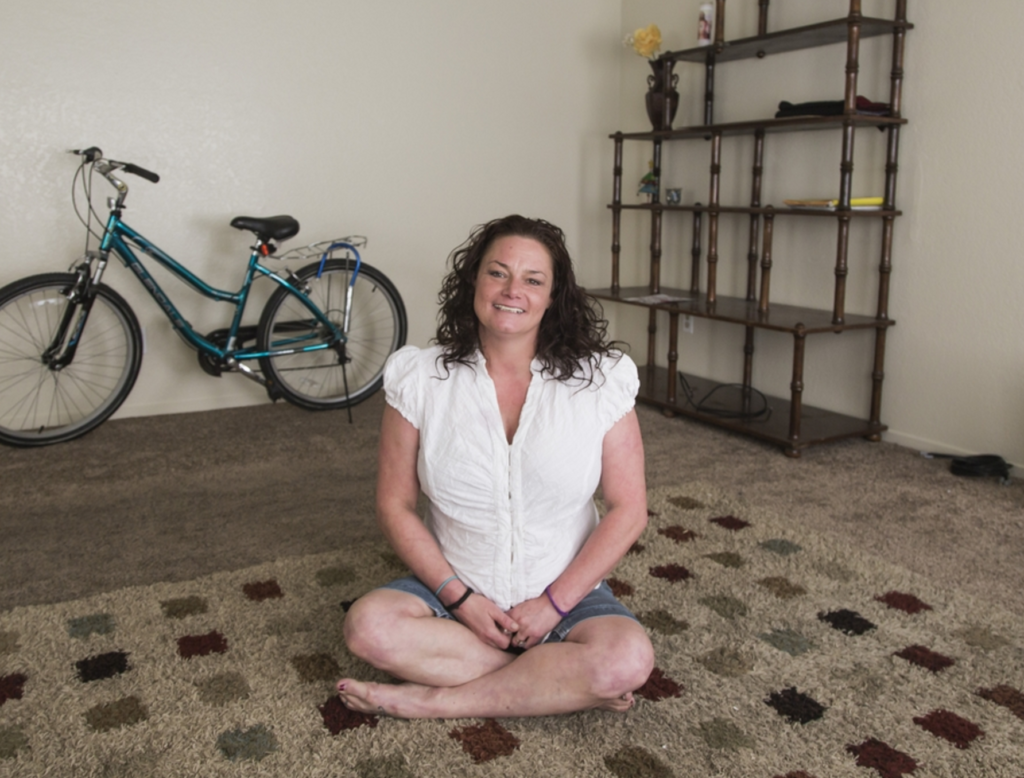 The way Esther Delahey sees it, her neighborhood in south Fresno, the Lowell district, has gotten a bad rap. Named in 1884 for the New England poet James Russell Lowell, the district is part of a larger area, hemmed in by three highways. Wrecked by a litany of economic and social woes, it was known back in the 1990s as “The Devil’s Triangle” and even today is noted for its high crime rates and gang activity, the visible presence of prostitution and drugs, sky-high poverty rates and housing blight.

However, for Delahey, who grew up home-schooled in the mountains east of Bakersfield, and who moved into the neighborhood in 2006 at the urging of members of her church, it’s home. She likes her neighbors, enjoys walking her two young children around its streets and takes pride in her work with the Lowell Community Development Corporation organizing tenants and going after slum landlords, of which there are many. Some are small-time property owners, who run one or two buildings and put in virtually no money into upkeep. Others, like JD Home Rentals, are huge landlords, their thousands of rental units, which don’t accept Section 8 tenants and thus aren’t subject to  Federal Housing Administration inspections, are notorious throughout the city as dangerous and unhealthy living environments. Capital & Main both telephoned and emailed JD Home Rentals seeking comment for this article; none of the messages were responded to. 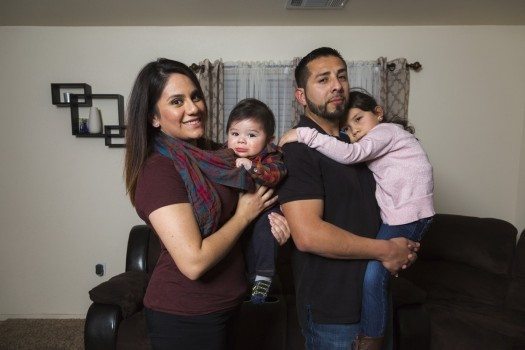 Yesenia Bresca and Luciano Lopez and their two children inside their Fresno home.

Many areas in Fresno are desperately poor, several with well over 40 percent of residents living below the poverty line. Nationally, only Detroit and Cleveland post significantly higher urban poverty rates, and a handful of other cities have similar poverty rates. The city’s Housing Authority helps 18,000 families with average annual incomes of $11,000, either by placing them in public housing or providing Section 8 vouchers (the average value of which is $500 per month), according to its director, Preston Prince.

But another 60,000-plus families have filled in pre-applications to enter a lottery to get onto the waitlist for Section 8. Fresno has received no additional money from the feds for vouchers in a decade, with the exception of a small influx of funds to provide assistance to homeless military veterans – and is unlikely to receive assistance any time soon. In a city where nearly half of all residents are poor, the Housing Authority can only assist about 10 percent of families who rent their homes.

No public housing has been built in Fresno since 2010, when the city used a one-off infusion of American Recovery and Reinvestment Act (ARRA) funds to build some homes. It has made more than 20 real estate deals in the last eight years, buying properties or working with developers to build senior-living and assisted-living facilities, but that’s a mere drop in the bucket given the scale of the need.

Organizations like Self Help Enterprises (SHE) have built some homes for low-income locals looking to buy, using a “sweat equity model” in which future owners help build their own houses. Their labor is used in lieu of a down payment to keep costs low, with the city of Fresno and nearby commuter towns such as Clovis providing secondary loans, which don’t come due for decades, to make the primary mortgage more affordable. The homes they have developed this way are beautiful, and the lucky few occupants end up with houses far superior to anything they could afford on the open market.

For Luciano Lopez and Yesenia Bresca, who live in one such prize home with their two young children, the SHE model has allowed them to buy a house both larger and in a better neighborhood than what they could have otherwise afforded. “Oh my gosh,” Yesenia remembers, “it was such a blessing. I felt it was surreal for the first six months. Did this really happen? It was so crazy for us.”

Nearby, Faustino and Lupe Chavez are enormously house-proud of their four bedroom, two-bathroom SHE home, with solar panels, that they put a $5,000 down-payment toward, and then helped to build from the foundation up. Over a period of months they put in 40 hours a week, not just working on their house but also helping on the construction of their housing tract’s 17 other homes. It was, in many ways, an urban equivalent of the fabled Amish barn-raising collaborative efforts in rural Pennsylvania. 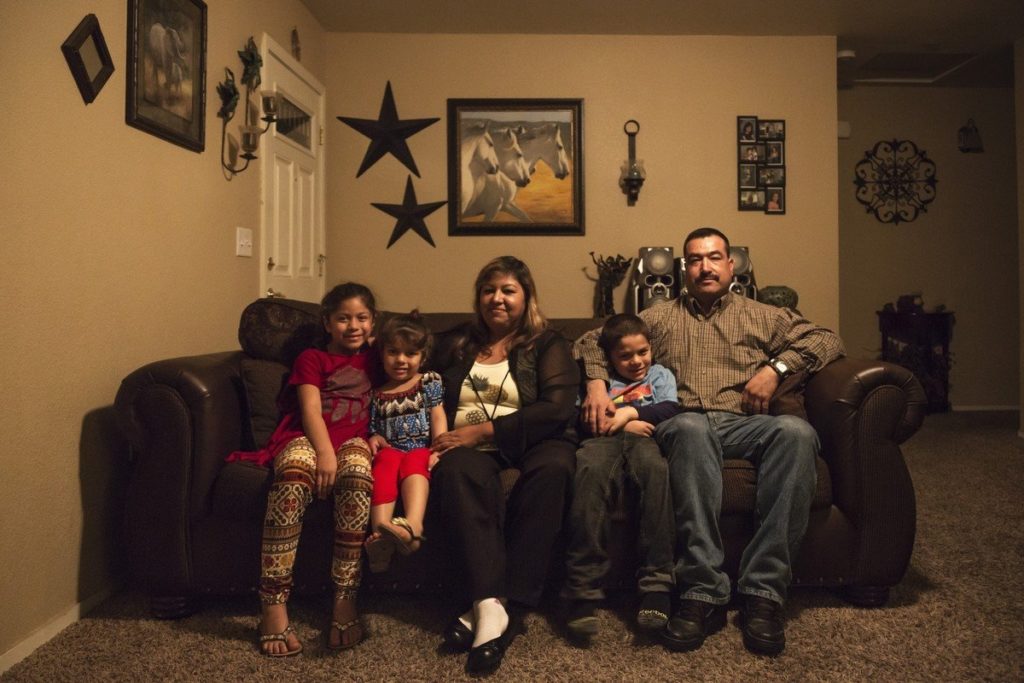 The Chavezes inside their Fresno home, which they helped build themselves.

“We built a house from the ground up,” Faustino says in amazement. And, because they put in so much sweat equity, their mortgage costs are very low — $711 per month for the four-bedroom property and $11 in gas bills, far less than the $1,300 monthly rent they were paying for a smaller house before they got involved with SHE.

“This is where we’re going to grow old,” says Lupe happily. “We love this area.”

But Yesenia, Luciano and the Chavezes are the jackpot winners in an otherwise bleak housing environment for low-income Fresnans. Fewer than 12 percent of residents in the Lowell district, for example, are homeowners. The rest rent, oftentimes living in conditions that look and feel more akin to a Third World slum than to a neighborhood in the richest state in the richest country on earth. 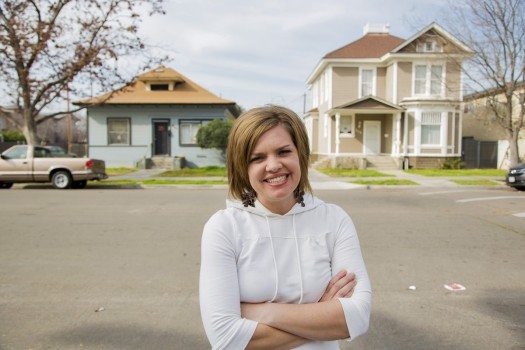 Thirty-eight-year-old Randina Elias and her two kids live in a one-bedroom unit on a property so run-down that, recently, the Lowell Community Development Corporation convinced the Housing Authority to partner with it and purchase the property in an attempt to improve conditions. But, before things improve, Elias, a recovering addict with wrecked credit, who has been in and out of motels and SROs in recent years, has to endure the legacy of decades of slum-ownership.

For the $495 monthly rent that she pays, she gets to live in a building most of whose units are abandoned and boarded up; the courtyard of which is unlit and filled with dog shit, garbage and other detritus, and in which her young children have several times been jumped; the stairwells of which routinely host the homeless and the apartments of which are bug, roach and rat-infested. When she moved in, she found bullet holes in the ceiling and walls of her room. The complex has no onsite manager to monitor goings-on and as a result the apartments are routinely burglarized. Frequently, police officers run through the courtyard, guns drawn, pursuing crime suspects.

At night, Elias says, “It’s pitch dark. It’s very scary.” Coming home after nightfall, she has to navigate her way by the light of her cellphone. “My daughter’s been jumped. My son’s been hit many times. If they come behind me, I’m done. ”

Why We Need to Move on Infrastructure Now