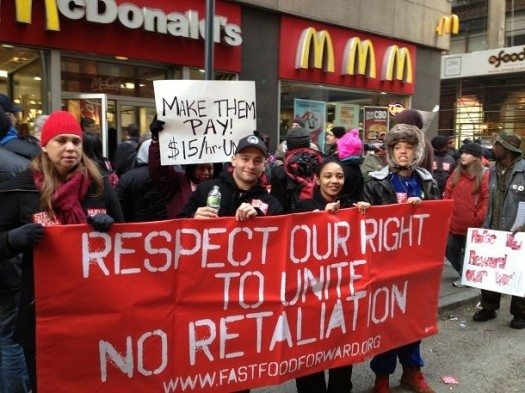 Labor Day may be over, but if the recent strikes in 60 cities are any indication, fast food workers intend to keep turning up the heat on a vast American industry built around poverty wages. For the first time, this mega-sector that grosses $200 billion a year is under serious scrutiny, as increasingly emboldened employees across the country demand a living wage from immensely profitable corporations sensitive to their public image.

While the focus on fast food workers’ paltry wages is well deserved, there’s another issue that demands attention: the rampant violation of labor laws by fast food giants.

It’s bad enough that 83 percent of workers in this industry earn less than $10.10 an hour — the average fast food cook, for example, makes $9.02 an hour or $18,760 a year — while typically being denied health insurance and other benefits. Adding injury to insult is the fact that fast food chains routinely break a wide range of laws meant to protect these workers.

Among the most common violations is wage theft, a term used to describe practices that deprive employees of wages to which they are legally entitled. Across all industries, American workers lose an estimated $30 billion a year to wage theft.

On the opposite coast, meanwhile, Taco Bell Corp. is defending itself against class-action suits alleging violations of California labor laws, including “unpaid overtime, failure to pay wages on termination, failure to pay accrued vacation wages and failure to pay minimum wage.”

Fast food workers are also vulnerable to a practice all too common in the U.S.: retaliation. The weakness of American labor law allows employers to engage in aggressive efforts to discourage workers from organizing for better conditions or union representation. Prior to last fall’s strikes by fast food workers, the Fast Food Workers Committee filed multiple charges with the National Labor Relations Board against fast food companies alleging a variety of forms of illegal union busting. In response, community supporters have volunteered to escort fast food workers back to their place of employment following strikes, a tactic that has proven successful.

Another issue that fast food workers contend with is safety. In July, the perils faced by these workers took front and center when workers at a Manhattan McDonald’s and a Chicago Dunkin Donuts went on strike to protest what they alleged were excessive, dangerous heat levels. Studies of the restaurant industry, including fast food operations, have found systemic safety risks. For example, a 2011 report by the Restaurant Opportunities Center found that in Los Angeles, 42 percent of restaurant workers had been burned on the job and an equal percentage had been cut, while nearly 30 percent reported doing something that had put their own safety at risk.

Holding fast food corporations accountable is challenging, not least because courts often rule that franchisors are not liable for the actions of their licensed stores. Shifting responsibility to the individual franchises is nothing less than a “scam,” according to labor historian Nelson Lichtenstein, but it can be very effective.

Nevertheless, as fast food workers intensify their efforts to improve conditions, allegations of labor law violations will likely play an increasing role. After all, knowing that your favorite burger joint not only pays lousy wages but also breaks the law can leave a bad taste in your mouth.

(Julie Gutman Dickinson is partner in the union-side law firm Bush, Gottlieb, Singer, Lopez, Kohanski, Adelstein & Dickinson. She also serves on the Advisory Board of the Los Angeles Alliance for a New Economy. Her post first appeared on Huffington Post and is republished with permission.)

Related Topics:fast-food workers
Up Next