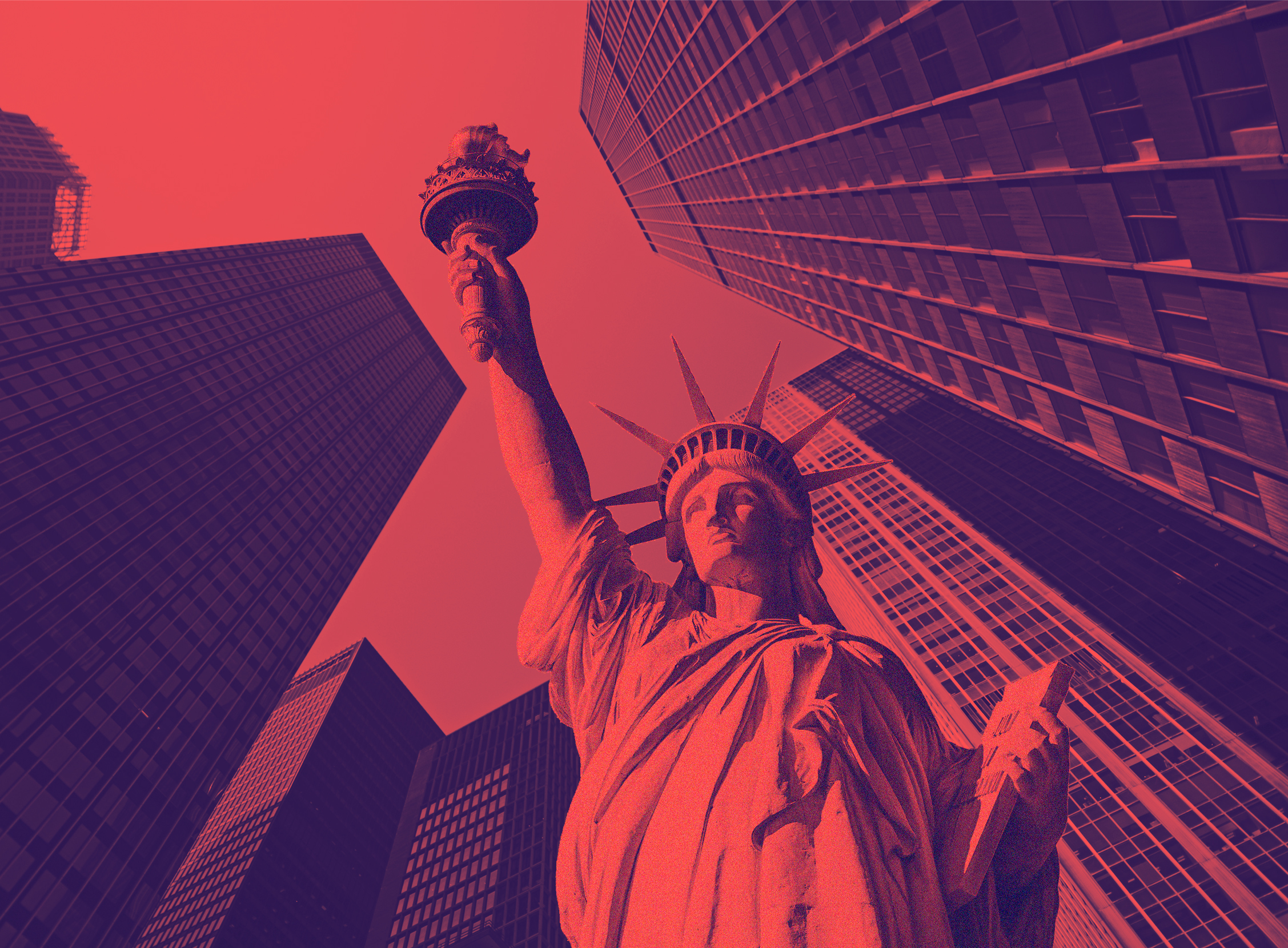 That’s the reality at this precarious moment in U.S. politics, in which CEOs need to perform an increasingly difficult balancing act.

In some sense, this is nothing new. For years, executives have faced activist shareholders demanding more socially responsible leadership on one side, and conservative politicians accusing them of being woke on the other.

But when scores of Republican candidates followed Donald Trump’s lead and insisted that the 2020 presidential election was stolen, it aggravated profound fears about democracy, raising the stakes for many companies that support potentially influential politicians. The polarized environment has left three in five Americans believing our democracy is at risk of complete failure.

Now, CEOs must decide what to do — or risk being left out of the political process altogether. Should they continue wooing politicians who undermine the electoral process but advance the corporations’ legislative and regulatory agenda? Or should they only support candidates who believe in the legitimacy of the American democratic system?

It’s hard to predict how corporations will behave, especially given that many of them have  thus far failed to hold anti-democratic politicians accountable.

Following Jan. 6, 2021, numerous corporations ceased giving to the 147 Republicans who voted to invalidate the 2020 elections, but many have since taken up their old habits, according to an accountability tracker maintained by Popular Information.

When it comes to political giving, many corporations need convincing that it’s time to pull the plug on election deniers.

While corporate leaders may privately want to ditch these conspiracy theorists with alarmingly large platforms, they also want to maintain access to Republican politicians, who mostly seek to gut corporate taxes and regulation. Further complicating their calculus is a frightening reality: A collapse of the American democratic system would be just as bad for their businesses as it would be for the rest of society.

Some critics believe corporations should never have been invited to play in the first place, and should just stay out of politics altogether. But such a shift is still science fiction. For now, experts in the corporate accountability world say that corporations can and should do more than they currently are to avoid undermining democracy.

This is step one. Corporations can’t bury their heads in the sand on this issue any longer, experts say. They must, instead, be deliberate and explicit about not providing financial support to election deniers.

When it comes to political giving, many corporations need convincing that it’s time to pull the plug on election deniers.

Too many companies don’t think about the long-term consequences of their political giving, says Meredith Benton, the workplace equity program manager for As You Sow, a nonprofit that supports corporate shareholder campaigns aimed at promoting social good. She is also the founder of Whistle Stop Capital, which helps investors improve ESG (environmental, social and governance) compliance in their portfolios.

“There’s no advantage to any company, that I can think of, to have a highly polarized society,” she says. “That undercuts their ability to access the marketplace, and it certainly makes their marketing plans much more complicated.”

Benton suggests that corporations get involved in elections as early as possible, so that they’re not left with the choice between eating burnt steak or no steak at all. They can accomplish this by making clear during primary season which positions candidates will need to support to earn their dollars.

Jen Stark, co-director of BSR’s Center for Business and Social Justice, recommends that corporate leaders meet internally to ensure everyone is on the same page about political giving, and put guardrails in place to ensure they are not supporting the wrong people. BSR is a consultant for companies on sustainable business practices.

Corporations can support democracy by ensuring their workers are given adequate time to actually, you know, vote.

Your Workers Are Voters, Too

Gerrymandering, barriers to voting: There are structures in place that make the country less democratic. Stark recommends that corporate America roll up its starched shirt sleeves and fix them. “Business can support structural reform,” she says, pointing specifically to voting rights and access, electoral reforms and combating gerrymandering. Adequately addressing these issues will help strengthen the foundations of democratic governance.

Then there is the simple stuff. Jonas Kron is the chief advocacy officer at Trillium Asset Management, an activist firm focused on socially responsible investing. To him, corporations can support democracy by ensuring their workers are given adequate time to actually, you know, vote.

Kron points out that Election Day is not a paid holiday in the U.S., which often has the effect of making it difficult for some people to cast their ballots. Guaranteed paid time off to vote, he says, “is something that companies can do relatively quickly and easily.”

Talk To Your Pals

Corporations need to use their influence as members of trade associations, says Stark, to ensure that those organizations are not supporting anti-democratic candidates. Trade associations, like the U.S. Chamber of Commerce, are one of the primary tools of corporate political giving. Unlike many companies, they did not commit en masse to stop backing election objectors after Jan. 6.

According to Stark, businesses can begin by talking to other members of trade groups about how to figure out which candidates to support — and which ones to drop. “What might be some common criteria where a candidate might be off the board? Like, if they denied the outcome of an election might be a good catch-all starting place,” she offers.

The public should also be given more of a window into what’s happening within the associations’ walls.

One of the ways businesses can push back against anti-democratic sentiment is to make powerful public statements in support of democratic norms.

“A big part of what’s been missing up until now is disclosure from [trade] organizations on how they’re involved and what they’re doing,” says Benton. To remedy that, corporation members should step up and call for more transparency in how giving decisions are made, she recommends.

Businesses have spent the last 30 or 40 years undermining government, and now “the chickens have come home to roost,” says Kron. Such anti-government bias has fueled the surge in election denialism over the last two years.

“What we’re seeing is that companies have to very quickly come to the realization that they are not separate and distinct and cannot wash their hands of their relationship with society and government,” he says.

One of the ways businesses can push back against anti-democratic sentiment is to make powerful public statements in support of democratic norms.

According to Kron, such statements should make clear to candidates the corporation’s belief that “a healthy democracy is important for a healthy economy.” He also recommends that companies emphasize the importance of politicians waving the white flag once it’s obvious they’ve lost a contest.

But Stark warns that these statements will be seen as empty if they don’t line up with what the company is actually doing.

“I wish companies were, dare I say, as woke as they’ve been maligned to be by some,” she says. She mentions how many companies have been showing up so much more recently with major financial commitments on issues such as LGBTQ equality and climate change. “But then, with just these chummy couple of $1,000 checks, they’re undermining the whole thing.”

Take Your Ball and Go Home

Kron and Stark both referenced a Harvard Business Review article written by Dorothy S. Lund and Leo E. Strine and published earlier this year, arguing that rather than helping shareholders, corporate donations may be responsible for hurting innovation and increasing risk. Lund and Strine conclude that “the best business practice is for CEOs to pledge that the corporation will make no donations with treasury funds and to limit involvement in the political process to lobbying or speaking up on issues that the board has deemed consistent with the company’s values.”

Stark appreciates their “simple solution to a complex problem.” But, she says, “until there’s industry consensus to do that, no company wants to be the one who’s left out of that influence game.”

One option for companies is to reduce their political donations without completely shutting off the spigot.

“You don’t always have to pull your pocketbook out,” says Benton. “If a company is unclear on if a political candidate is in their best interest, they probably should take a step back.”

Others, though, believe it would be best if corporations simply stick to business, and play no part in the political process.

“I don’t know if there’s anything you can do in terms of just moral prescriptions to convince the business community in that respect,” says John Bellamy Foster, editor of Monthly Review and professor of sociology at the University of Oregon. “Basically, corporations are interested in primarily one thing, and that’s profit margins.”

In the near term, of course, corporate involvement in politics isn’t going anywhere. If corporations, therefore, want to avoid undermining American democracy, they’ll have to walk a tightrope.

Related Topics:Featuredvoting rights
Up Next