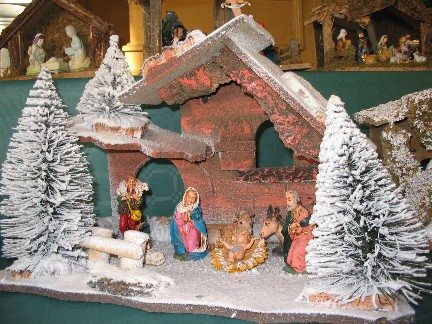 People often get pretty touchy this time of year.  Maybe it’s having to go to the mall.  Maybe it’s the stress of dealing with family.  Maybe it’s thinking about all those broken resolutions from a year ago.  But whatever the reason, Americans tend to lash out at each other more than usual.

A perennial complaint has to do with the so-called “War on Christmas.”  Showing that my own people don’t have a monopoly on a persecution complex, some Christian groups are very quick to declare themselves under attack.  And to be sure, our on-again-off-again national flirtation with inclusivity does lead many people to say things like “Happy Holidays.”  (I know, how hateful!)

Contrast this with the latest flap out of Santa Monica.  For years, Christians have staged Nativity scenes in a public park in that city.  Recently, other groups have been interested in staging their own scenes, and so the city initiated a lottery system to dole out the limited number of spaces.  Naturally, this meant that the Christian monopoly on public land ended, and they now have to share the space.  The Christians are understandably bummed out.

But listen to this analysis by Hunter Jameson, one of the Nativity boosters: “By trying to push the Nativity scene out of the park and silence us, these people are infringing on our freedom and First Amendment rights.”  Now we’re in tricky territory: rights infringed upon!  Can this be the case?

In fact, this response shows a dangerous misunderstanding of the nature of the First Amendment.  The First Amendment does not guarantee everyone the right to public land to express their own idiosyncratic religious beliefs.  We don’t have nearly enough land for that, and besides, I’m not sure how I’d build a diorama of an octopus.

The first amendment does guarantee that government does not favor one religion over another.  And by setting up a lottery system for access to scarce public land, the city of Santa Monica has quite elegantly lived up to both the letter and the spirit of the First Amendment.

I’m not sure if Jameson, the offended Santa Monica Christian, is speaking disingenuously or if he is truly confused about how the First Amendment works, but speaking of infringed-upon rights is dangerous stuff, and we’d all do well to be clear about the issue.  Christians aren’t the only ones with these rights, nor are their rights more important than the rights of the atheists who are also vying for the land.  Somehow, Jameson’s discussion of how “these people” are infringing upon “our freedom” reminds me of George Carlin’s classic explanation of the difference between “my stuff” and “your shit.”

Charity: The Gift That Keeps on Giving