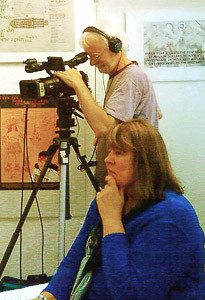 For Oneil Cannon, breaking the color line of L.A.’s lily-white printers’ union didn’t simply mean facing a night of scalding verbal abuse during his first union hall meeting – moments before it began he’d been refused service at knifepoint at a nearby restaurant. Jackie Goldberg says her activist’s DNA was shaped less by Berkeley’s celebrated Free Speech Movement than by a little-noticed women’s conference held the year before the U.C. campus erupted. Peter Douglas’ journey from the frozen roads of war-torn Poland to Redondo Beach’s balmy Esplanade led the father of California’s Coastal Act to become a “radical pagan heretic.”

These and more than 40 other reminiscences by Southern California social activists have been recorded by Julie Thompson and her husband, Brogan de Paor, as part of an ambitious yet shoestring-funded project called the Activist Video Archive. So far the couple’s subjects have also included Haskell Wexler, Cheri Gaulke, Rodolfo Acuña and Peg Yorkin.

While many progressives may believe they have a personal relationship with history, they have left a surprisingly thin record of their work – an information gap that the mainstream media show little inclination to fill.

“The sense of history in the U.S. is about 10 minutes long – on a good day,” says Thompson, an executive producer of the film Nebraska and a former manager of singer Holly Near. “This is a project of historical memory. We do these long interviews to learn what formed people’s politics and how they organized for social change.”

She and de Paor, a veteran filmmaker, had been kicking around the idea of creating a local history video project for about a decade when, three and a half years ago, their company, Sundays Well Productions, was hired for a job that pushed them to take the first steps.

“To make a living we were interviewing activists who were being honored at dinners such as the Liberty Hill Foundation  dinner or Physicians for Social Responsibility,” Thompson tells Capital & Main. “Then Hamilton Fish was out here for the Nation Institute, which was honoring Bob Scheer. Bob gave us a list of 40 people to interview, including Gore Vidal, Alice Waters and Ron Dellums.”

Thompson and de Paor decided the time was right to begin their own project.

“The idea,” says Thompson, “is to eventually make this a searchable database for the activist or historian or sociologist who can go to it to learn about the Port Huron Statement or the war in El Salvador or the women’s movement in the late 1960s and early 1970s. Right now we’re just collecting interviews – I research, Brogan shoots.”

Another goal is to have the interviews, which typically require four to eight hours of questioning, transcribed and available for reading.

Thompson and de Paor’s main challenges – time and money – are the ones faced by anyone trying to capture and bottle elusive history. The couple operate out of their two-bedroom Santa Monica apartment, which also doubles as their editing studio. The falling price of recording technology keeps their costs down, but their Poverty Row budget limits what they can do. It would cost, for example, about $28,000 to transcribe their current inventory, so they make do with having interns transcribe only the most recent interviews.

Thompson and de Paor have raised $210,000 over the past three years, which allows them to work on 10 to 12 interviews per year. Thompson says they hope to partner with an institution with the resources to fund future interviews and curate the archive. For now, however, they must raise money through house parties and small individual donations.

More critical, however, is the race against time to interview older activists while the subjects are still alive, lucid and eager to talk. Thompson remembers the determination of longtime California Coastal Commissioner Peter Douglas, who was stricken with cancer, to drive himself to his interview two weeks before his death.

“History is always spun by the people in power,” she says. “As that happens, important voices get spun in a different direction and discredited. We think that dissent and the old-fashioned notion that one person making a difference is what made this country great.”