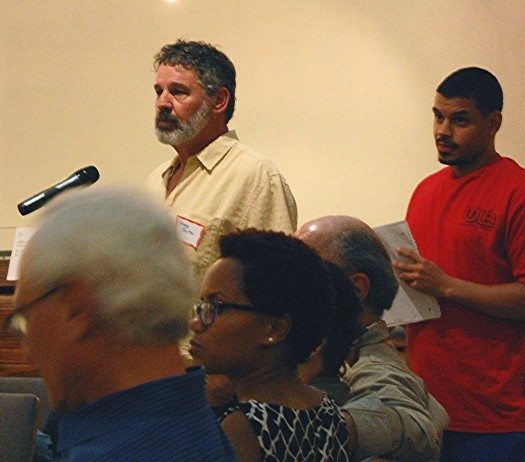 The evening’s harshest words were reserved for LAUSD Superintendent John Deasy and Parent Trigger, the controversial law that allows 50 percent-plus-one of parents from an under-performing school to fire the staff and start over.

Winograd criticized Deasy for what she called his “massive giveaways of public schools” to charter companies and accused him of disingenuously brokering a three-year moratorium on charter transfers with the UTLA, but then increasing “reconstitution” — the process by which a school and its laid-off teaching staff is replaced by a magnet school and a new staff.

Roos, whose own child went through reconstitution, criticized the process as “wrenching” and one that vastly complicates a long-term plan of learning and commitment and connection between students and teachers, adding that “these sorts of reconstitutions are really doing violence to education.”

When it came to Parent Trigger, Zimmer said the law’s worst aspect is the confrontational organizing tactics of militant groups like the Walton Family Foundation-backed Parent Revolution, which “pits parents against each other.”

Scott went further. Not only, he said, is the law “specifically designed to pit one stakeholder against another.” Parent Trigger “takes hope and turns it to hate.” A better name for the law, he quipped, would be “Drive-By,” since the parents who pull the trigger pass out of the school after a couple of years, leaving the teachers and administration to deal with the takeover’s lingering repercussions.

The panel also expressed unanimity on the shortsightedness of standards-based teaching, a policy that Winograd charged was shifting more and more public money and resources from arts programs to pursuing the “unrealistic goals” of standardized testing.

Scott noted that at his own school, the shift in funding has resulted in the cancellation of a film class he was teaching as well as the entire art program. Cummins recalled conversations with LAUSD principals, who declined free arts programs, saying that test preparation meant that they “just didn’t have the time.” The net effect of the national culture of testing, Cummins added, is that it’s “squeezing the joy out of education for both teachers and students.”

The ultimate cost of privatization, all agreed, was to the nation’s guarantee of a quality education for all students. Zimmer said that here in California, that broken promise is most apparent when one takes a look at what he called “outcomes.”

If a consensus emerged among panelists, it was that the most persistent and fundamental problem facing LAUSD remains the lack of adequate funding.

Scott noted that California ranks 48th nationally in per-student spending – just behind Mississippi. Cummins pointed out that while the cost of a first-rate education at Santa Monica’s private Crossroads School is $30,000 per child, LAUSD spends only $8,000 on each of its 650,000 students. Cummins added that while a teaching load of five classes of up to 45 students each are not uncommon at LAUSD, teachers at a school like Crossroads have four classes a day with 15 to 20 students each.

On the subject of charter schools, Zimmer affirmed his belief in offering parents choice but decried what he called “a system based on hyper-competition and saturation influenced by … a limitless amount of private funding.” He pointed out that it is a system that has produced an abundance of charters in the affluent Westside while leaving poorer neighborhoods seen as less desirable by charter companies relatively underserved.

Roberts termed school privatization efforts — a movement that she said included the push for both school vouchers and charter schools — as “a threat to public education.”