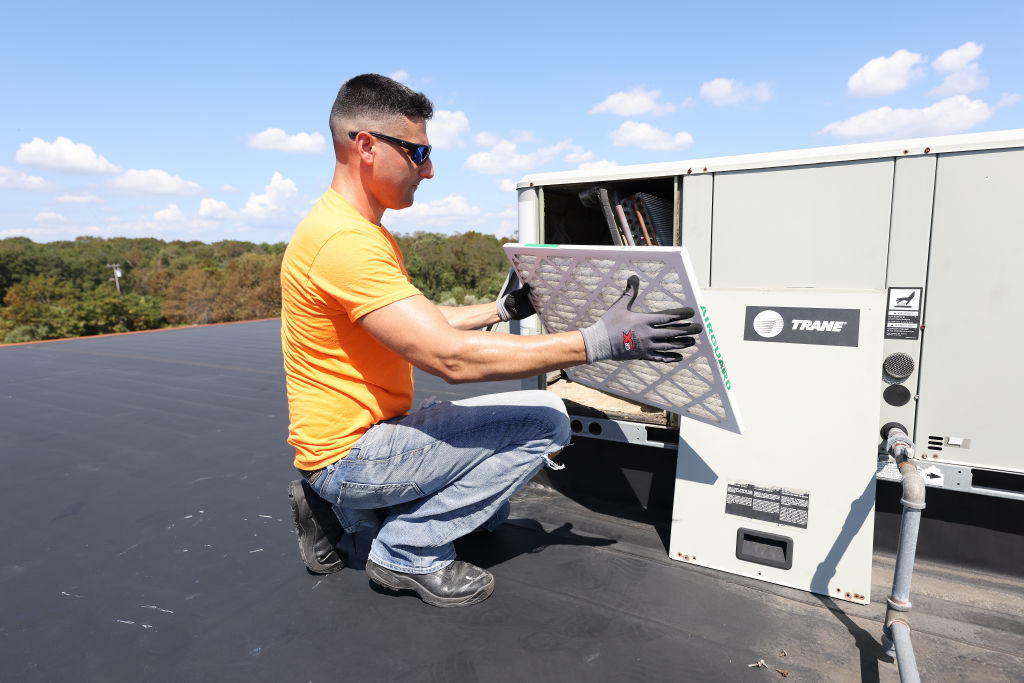 When the Centers for Disease Control and Prevention (CDC) announced in mid-February its most detailed guidelines yet for how K-12 schools in the U.S. might reopen safely in the midst of a pandemic, it was what the agency didn’t say that confounded many experts. In an otherwise thorough examination of the factors contributing to the spread of COVID-19 and of the possible ways to mitigate them, the CDC devoted but a single paragraph to the problem of classroom and building ventilation, offering a link to more information.

Ventilation is given lip service, with little guidance,” said Dr. Richard Corsi, an authority on indoor air quality, in a series of scathing tweets. “The lack of understanding of ventilation or its importance (or perhaps just disregard) is wholly obvious. Incredibly disappointing.”

An estimated 40% of all schools nationwide need to update or replace their HVAC systems.

It’s also the elephant in the living room of the discussion. Years of underinvestment in the upkeep of public-school facilities across the country have led to this moment, and the threat of a deadly virus has brought the problem to the fore. The simple truth is that for many school districts, the cost of upgrading or improving their ventilation (HVAC) systems, though critical to student and staff health, may be well beyond their means, particularly in poorer communities.

The numbers are stark. A June 2020 study by the U.S. Government Accountability Office found that HVAC is the most widespread deficiency in public school facilities nationwide, with an estimated 40% of all schools needing to either update or entirely replace their systems. The Center for Cities + Schools at the University of California, Berkeley, meanwhile, found that in recent years more than four in 10 California school districts have underspent on both capital renewals (like replacing HVAC systems) and maintenance.

In California, any such problem can be amplified by volume. More than 10,000 K-12 schools operate in 1,037 districts, each of which sets its own budget priorities and is responsible for the systems it operates – or ignores. The state keeps no records when it comes to individual school district ventilation equipment.

With nothing to guarantee school infrastructure upgrades, familiar patterns are emerging: Wealthier districts can find the money to improve conditions, while poorer ones cannot.

Increasingly, experts say, HVAC updates and maintenance have been pushed to the back of the line of concern in many cash-strapped California districts. In the face of COVID, those outdated or low-functioning systems may be inadequate to the task of moving enough fresh air through classrooms to help protect students against infection.

This means that regardless of other steps that may be instituted, like masking, distancing and testing, many of these school buildings will remain dangerously vulnerable to the spread of disease when again in regular use — a reality that is not going to change anytime soon.

“These [poorly ventilated classrooms] are the riskiest places to be, period,” said Jeff Vincent, director of public infrastructure initiatives at the Center for Cities + Schools. “We had widespread school facility problems and inequities before the pandemic. The pandemic has highlighted them.”

One example: Philadelphia, where teachers have staunchly opposed reentering classrooms until major issues, including ventilation, are fixed. Part of the furor centers on the school district’s use of up to 3,000 small residential window fans to improve air circulation at 32 schools in which the ventilation systems no longer work at all.

Higher ventilation standards in classrooms have been linked to reduced student absences due to illness and improved learning and test scores.

While there are exceptions, Vincent said, poorer school districts generally are going to bear the brunt of the risk. With research suggesting that these districts have the least amount of money to invest in facilities upgrades, he said, “These poor school buildings will make mitigating transmission risk more challenging. And less affluent children tend to go to school in these riskier facilities.”

In other words, many of the schools with the least ability to improve such things as ventilation reside in districts significantly composed of lower-income families — precisely the communities of color that already have been disproportionately ravaged by COVID-19.

And even upgrading ventilation systems means little if the newer HVAC isn’t regularly inspected and maintained — another carrying cost for districts. In a joint 2019 study, University of California, Davis, and Berkeley Lab researchers visited 104 classrooms throughout California and found that 85% of them did not meet indoor air quality standards — and every one of those classrooms had been retrofitted with a new HVAC unit within the past three years.

“This is a perpetual question in schools,” said Angelo Bellomo, a longtime public health official who for years oversaw environmental health and safety for the massive Los Angeles Unified School District (LAUSD). “Students cannot learn and teachers cannot teach properly if they’re ill, and ventilation is one of the factors that affects that.”

The idea of constantly moving fresh air through classrooms in order to improve overall health and well-being predates the pandemic by many years. In 2013, scientists at the Berkeley Lab found that bringing ventilation rates up to recommended standards in classrooms would reduce student absences due to illness, and numerous other studies have established links between ventilation and improved learning and test scores.

“The benefits of adequate ventilation go far beyond [staving off] COVID-19,” said Raj Setty, president of a Washington, D.C., engineering firm and a course instructor with the American Society of Heating, Refrigerating and Air Conditioning Engineers (ASHRAE), which has established the most broadly accepted standards for indoor air quality in the nation.

When it comes to schools, ASHRAE’s recommendation is for five to six “air changes” per hour — that is, clean air should be brought into a classroom roughly every 10 minutes, whether by a ventilation system or open windows. Further, the organization, whose findings the CDC has endorsed, calls for schools to use air filters with a minimum efficiency reporting value, or MERV, of 13 or higher. (The MERV scale is 1-16; the higher the rating, the better the filtration of air particles.) The Environmental Protection Agency also recommends MERV-13 filters, which are roughly the protective equivalent of an N95 mask.

But enacting those recommendations can be wildly expensive. The Lawndale Elementary School District, southwest of Los Angeles, is in the process of replacing the HVAC systems in eight of its nine schools (the ninth already has a newer system). The price tag: an estimated $3.5 million. And the district will spend another $40,000 per year to replace the MERV-13 filters in every school once per quarter, said Dr. Gretchen Janson, assistant superintendent of business services.

In Modoc County, in northeastern California, school administrators used $60,000 in funding from the CARES Act (the $2 trillion relief package passed in 2020) to buy air filters and purifiers for each classroom. But the filters have only a MERV-7 rating; higher-rated filters don’t fit the schools’ older HVAC systems.

While some districts may be able to use local bonds to pay for upgrades, others are hoping for an infusion of state money or for an infrastructure package produced by the Biden administration, which could allocate federal funds for school facilities and operations. But with nothing guaranteed, familiar patterns are emerging: Wealthier districts can find the money to improve conditions, while poorer ones cannot.

“Schools serving more low-income and/or nonwhite children tend to have poor school facility conditions, and their districts tend to be more likely to underinvest in their facilities,” Vincent said. “Taken together, that suggests a very inequitable risk of exposure when back at school.”

There are exceptions. In the Lawndale district, 82% of its 6,000 students come from low-income families, but administrators were able to combine state bond dollars with a local bond passed in 2016 to fund the new HVAC systems. The ongoing cost of replacing the MERV-13 filters, Janson said, will be covered out of the district’s general fund.

Increasingly, Vincent said, that’s a rare example. L.A. Unified, the nation’s second largest district, comprises more than 1,000 schools and 660,000 students. While the district has built several new schools over the past decade, many of its buildings are older and are located in lower-income areas. According to the education news site EdSource, L.A. Unified has spent $6 million so far on HVAC upgrades and air filters, and expects to spend about $1.7 million each month for inspections and filter replacements.

“It’s really a room by room, school by school issue that needs to be assessed and then mitigated.”

“There’s going to have to be a balancing [of concern and budget] there,” said Bellomo, who is also former deputy director at the Los Angeles County Department of Public Health. “I think we’re dealing with an enlightened group at LAUSD, and they’re taking a close look at what can be done to make indoor spaces safer, not just now but going forward.”

When COVID-19 first reached the U.S. last year, researchers initially believed it to be a disease spread primarily by physical contact. It took some time before experts began to understand that airborne particles were the major vector of infection. That lag in information, many air quality officials believe, is still reflected in the CDC’s relative dismissal of ventilation issues when it discusses COVID and reopening schools.

But air quality experts are unified in their opinion: Without upgrades to HVAC, ventilation and filtration in many schools, airborne particles will linger in classrooms and spread the virus. And kids attending the most cash-strapped schools are most likely to be the ones who suffer.

“While we don’t have full information of the conditions and qualities of all public school facilities in California, the analyses we do have suggest there’s a big inequity here,” Jeff Vincent said. “It’s really a room by room, school by school issue that needs to be assessed and then mitigated.”