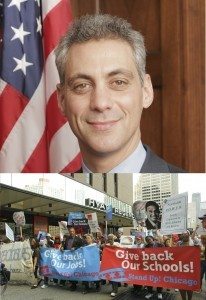 Sometimes you have to just love the California state constitution. It may right now be the one thing protecting us from the chaos inflicted on  Chicago, where the largest mass closure of public schools in U.S. history is underway.

You might remember when Antonio Villaraigosa was first elected Mayor of Los Angeles. One of his first ambitions was to become the decision-maker over the L.A. Unified School District, to once-and-for-all improve the city’s schools. He wanted to have the power of other big-city mayors like Chicago’s Emanuel and Bloomberg in New York, mayors who now appoint their school boards and their school superintendents.

These two men, with scant education experience, were sure they could do better than life-long educational professionals. They had been elected to run their cities, not their cities’ schools. But, hey, ambition knows no limits. And with the backing of the multimillionaires of the Gates, Broad and Walton foundations, they charged ahead.

School closure is the latest in the bag of tricks of Mayor Rahm Emanuel and those advocating “business model school reform.” Ninety percent of the children who will lose their public schools in this plan, according to education expert Diane Ravitch, are African American. An estimated 30,000 children will be affected, and many of the teachers who now educate them. A research report recently released by an association of school researchers called CReATE, shows that 65 percent of the teachers displaced in previous rounds of Chicago school closings were African American women.

If such a plan were implemented in the Deep South we’d be attacking it as racist public policy. But in Chicago, it may be only the next step in a movement to boost privately run charter schools and disempower both the community and the teachers union. (Forty percent of previously closed Chicago public schools have been converted into privately operated charters, according to the CReATE study.)  In the name of quality education, the business model reformers are working to contract out many of our public schools to private for-profit and non-profit charter schools which are largely excluded from the public decision-making processes .

Antonio Villaraigosa wanted to get his hands into public education. He knew that the public schools were what his constituents cared the most desperately about. But the California constitution puts responsibility for running California’s school districts squarely into the hands of locally elected, citizen-run, local boards of education, and Antonio was thwarted in his efforts. And as the recent school board elections showed, despite the power of over $3 million that the Mayor raised in outside money, local voters want to keep their school board essentially selected by and responsible to the community.  But in order to maintain local control of our schools, we had better start paying attention to the forces aligned on the other side.