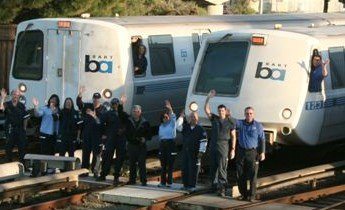 I’ve seen some pretty outrageous anti-worker opinion pieces written about the contract negotiations at Bay Area Rapid Transit (BART) over the last two months. But nothing I’ve read is as infuriating as a San Francisco Chronicle op-ed from Chuck and Barbara McFadden.

In short, the McFaddens assert that workers like those at BART are not deserving of the middle-class wage their unions negotiate. To make their point, they use an argument that’s all too common today — private sector workers are suffering so public sector workers should too. What’s so absurd about this logic is that the very reason so many private sector workers are struggling is because most don’t have the ability to bargain with their employer for a decent wage in return for a hard day’s work.

Workers should be able to negotiate with their employers over wages and benefits like health care and retirement security. In BART’s case, workers are coming off a four-year wage freeze. No question, our state has been through some hard times over the last four years so a wage freeze may have been reasonable at the time the last contract was negotiated.

But now, ridership is up and so is revenue. BART is running a surplus. Yet, BART’s proposal this year is to make workers pay more on the benefits side while only giving a minuscule wage increase. End result? Workers take home less to their families. BART also refuses to negotiate over rider and worker safety, critical issues for the unions.

That’s not a fair proposal given the situation. So workers are standing up to management with their union. And while a strike is an absolute last resort, it remains possible if management continues to refuse to negotiate in good faith.

Now let’s take another example. A worker at Walmart makes poverty wages and can’t afford health insurance. There’s no negotiation on these issues. It’s a “take it or you’re fired” kind of offer. It doesn’t matter that Walmart is the most profitable company in the U.S. It doesn’t matter that Walmart could easily afford a modest wage increase or affordable health care. It doesn’t matter because workers have no leverage. They are not able to stand together to bargain for a middle-class wage, so they won’t ever get it. And many private sector workers today find themselves in that same sinking boat.

So, there are two ways to go from here. We could, as the McFaddens suggest, lower standards and cut take-home pay for those workers who are still able to earn a middle-class wage for a hard day’s work. Or we could chart a new course. How about, instead, we stand together as public- and private-sector workers to demand that corporate America, whose profits have soared while the rest of us suffered, start doing right by their employees?

Big corporations and the politicians they bankroll like the first option. They want to turn workers against each other. “Let them fight for the crumbs while we enjoy the pie,” they say. I don’t know about you, but I’ve had it with that. Those at the top have had it too good for too long at our expense. It’s time workers shared in America’s prosperity again.

It’s no coincidence that the zenith of the American middle class coincided with the peak in union density. Workers were able by homes and cars with the wages they earned. Families thrived. The economy hummed. That was a result of workers being able to bargain for a share of the pie, just like BART workers are trying to do today.

The problem with America’s economy isn’t that there are too many workers – like those at BART – who have the ability to stand together to bargain with employers for better wages and benefits. The problem is far too few workers have that opportunity today.

And until we recognize that, we’re doomed to a future of increasing income inequality and a shriveling middle class. I doubt that’s what the McFaddens are angling for.

(Steve Smith is Director of Communications at the California Labor Federation. His post first appeared on Labor’s Edge and is republished with permission.)

When Vacations Take a Holiday