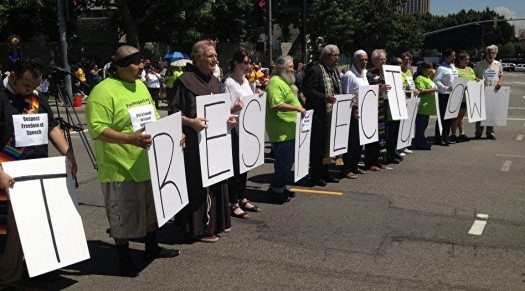 My friend Allison is a United Methodist minister. Her husband, Andy, pastors a United Church of Christ congregation. Both serve churches in Pasadena. Both of them have been involved in advocacy for the workers at Walmart.

Allison’s father, Alan, is also a United Methodist minister and an old friend of mine who lives in Honolulu, where he took the lead to start a faith-based advocacy organization that has made a strong impact on the city. So Alan has earned some progressive credibility. Andy told me that the last time he visited his in-laws in Honolulu, Alan and he were on their way back home from a golfing excursion, when Alan announced he was going “to pick up a few things at Walmart.”

Andy was aghast and said, “You shop at Walmart?”

“No, she never shops there!”

So Andy called Allison on his cell phone, then he put it on speaker. “Hi, Allison,” he said when she picked up, “we’ll be home shortly but your dad needs to stop and pick up a few things at Walmart.”

“He WHAT!?” she screamed into the phone.

So here is the truth: Lots of people I know – conscious, aware friends – still shop at Walmart.

That’s why last Thursday when Walmart workers walked off their jobs in cities across the country, Allison and Andy and I joined a group of clergy and workers in a civil disobedience action here in Los Angeles. With an equal number of Walmart workers and clergy we protested on behalf of 60 Walmart workers who had been fired for standing up for their rights. We got ourselves arrested to dramatize the ways that Walmart exploits their workers and the rest of us. Most readers are familiar with the surface facts:

I thought that was bad enough, but sitting in the police station waiting to be booked into jail, I learned even more:

The “Walmart Way” of management shocked me. After all, Walmart is known for calling its employees “Associates,” as if everybody was in the work together. They put their smiling greeters in blue coats front and center. Only by talking to real Walmart workers did I begin to understand the extent of unfairness beyond the surface.

And I am sure that is why so many of my friends never think twice about shopping there. Unless you know the real stories, off the record and outside the store, you’d never know about the harsh conditions Walmart workers endure every day. It’s enough to make you never want to go there ever again – unless they change their cruel ways.