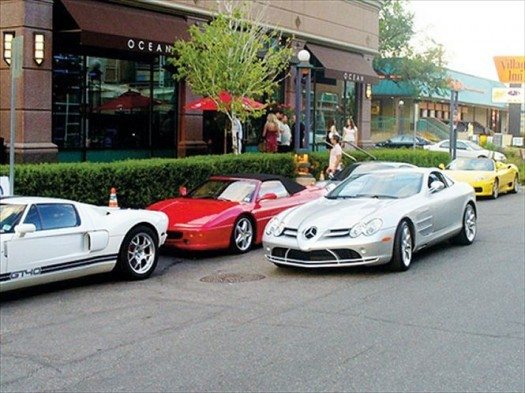 Last Friday, my wife, Susan, was out where Santa Monica meets Brentwood to tell the President not to approve the Keystone XL pipeline. No one caught a glimpse of him, of course. What she did see were scores of expensive cars moving down San Vicente – black, big SUVs, as usual, and top-of-the-line Mercedes and BMWs but also Jaguars, Ferraris, a Rolls, even a Lamborghini, plus others she couldn’t name. These cars begin at $75,000 and go to the mid-six figures.

Also trying to wind though the traffic maze were the workers, gardeners in small, beat-up Toyota pickups, house maids in compacts from 20 years ago, bunches of Latinas waiting at the bus stop for public transportation and delayed by the President’s presence at a fundraiser in a nearby home. The juxtaposition of the vehicles of the very wealthy and those of their servants was what she found remarkable about the experience.

Meanwhile, up the block, immigration reform activists engaged in civil disobedience, and across town – actually just a dozen blocks away – a young man was in a fit. With a couple of high-powered weapons in hand and dressed in black, he was busy killing five people, some deliberately and some at random.

John Zawahri, who was killed by police on the campus of Santa Monica College, was a 23-year-old living with his mother in an apartment a couple of miles away from where his brother and father lived. His parents had divorced after what appears to be a history of domestic violence, one son staying with the father, the other going with the mother. She, it turns out, was struggling to support both of them by holding down two waitressing jobs. Co-workers describe her as sweet. Neighbors describe him as angry. He apparently tried community college, and if he had a job, we don’t know about it.

What Susan saw coupled with what happened across town form a picture of the American economy of our time and the desperation it creates. A young man’s psyche shaped by a violent home life, a mother who works two dead-end jobs and a youth who only sees a bleak future for himself. That stark reality has become increasingly common for an entire generation. Either one is rich – like people on TV or in the movies or in the big cars on San Vicente – or one faces a reality of just getting by.

A young male finding himself in such a dilemma has few choices, but the default position appears to be uncontrolled rage, as we have seen in too many mass shootings this year. But we could expect that. By my casual count, more than half of top-grossing films are set in a grim future, in which the only solution is violence. Whether it is the end of the world or urban chaos or a war zone without escape, a violent hero wins the day.

Our culture offers little alternative to this desperation/rage/violence scenario. Heroes rarely use something other than violence to resolve tensions in the storyline. People who practice nonviolent action and advocate solutions without resorting to violence neither earn a place in the pantheon of cinematic heroes nor more than a minute on the evening news. With dramatic cuts in social service investments – especially mental health options – over the last three decades, alternatives have faded to the margins, barely surviving and certainly not easily available or well known. Amid the images of rage, the reality of anonymity and loneliness prevails, making violence a rational option for poor young kids.

In our apartment building, we are witnessing the hollowing out of the middle class. I have lived here for three decades. I raised a son here, but I have two bedrooms. Now, for the first time, three families live here in one-bedroom apartments, and another couple in the same small-sized unit will have a baby in the fall. None of these families considers moving. Even though both parents work, they live where they live because it is what they can afford. This is the reality caused by the loss of middle-class jobs – it’s a picture the Lamborghini drivers will never see.