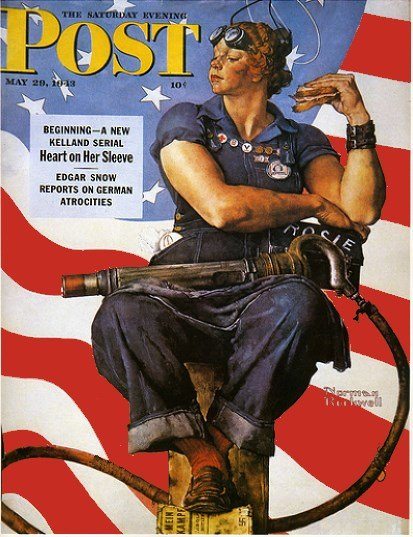 She was the perfect patriotic icon: Sassy yet dignified, brawny yet feminine – a massive rivet gun cradled on her lap, feet resting on a copy of Mein Kampf. And all the while she holds a sandwich as Old Glory ripples in the background. Mary Doyle Keefe, a Vermont telephone operator who posed for Norman Rockwell’s immortal Rosie the Riveter painting, first publicly seen on a 1943 Saturday Evening Post cover, died Tuesday at the age of 92. At the time of her brush with fame, Keefe was Rockwell’s neighbor and a little embarrassed that the artist had pumped iron into the painted arms of the petite 19-year-old.

Rosie the Riveter had too much whimsy and restraint for it to fade into kitsch or agitprop oblivion. Like J. Howard Miller’s equally famous “We Can Do It!” poster, with which it is sometimes confused, Rosie the Riveter would live on as a signifier of national unity and, eventually, of feminist power. And, like another 1943 work, Ben Shahn’s Welders, Rockwell’s painting became a tribute to the strength and dignity of labor.

It is with some irony, then, that Rosie the Riveter is now part of the permanent collection of the Bentonville, Arkansas art museum that was created by an heir to the Walmart fortune – a company synonymous with the degradation of labor and the disrespect of working people. The Crystal Bridges Museum of American Art was established by Alice Walton, who marshaled the enormous financial resources of the Walton Family Foundation to build it. And, not unlike a typical big-box Walmart store plunked down in any American town, Crystal Bridges cost Arkansas and Bentonville a lot of money in lost tax revenue – an estimated $17 million.

It is sad to note the passing of Mary Doyle Keefe, and to know the cruel truth that Rosie the Riveter was bought by one of the richest women in America and is kept in a museum that Walmart built. What would Rosie say?