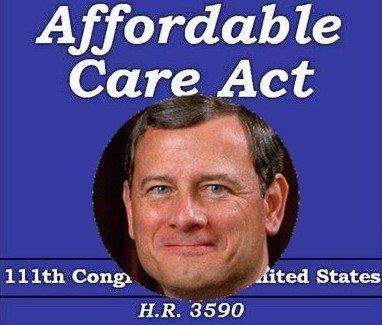 As Duke Law School professor Jed Purdy explained yesterday in his sensible, humane and far-sighted take on the Court’s decision on the Affordable Care Act:

“Justice Roberts’ opinion makes him a hero for a day to many liberals. It also moves the Court, at a stately pace, toward an aggressively right-wing view of the federal government’s power. Moreover, it keeps the Court at the very heart of issues where it does not belong. For all its obvious appeal, it is self-aggrandizing and far more radical in its reasoning than in its outcome. That reasoning may have serious consequences down the road.”

Purdy  refers in part to Justice Roberts’ endorsement of a narrow view of the Commerce Clause shared by the dissenting justices (Kennedy, Alito, Scalia, and Thomas), who would have struck down the Act in its entirety. (Roberts allowed the individual mandate to stand on the strength of Congress’ constitutional power to tax. Justices Ginsburg, Sotomayor, Breyer, and Kagan concurred in this result, while holding that the mandate was justified on Commerce Clause grounds as well.)

It is worth recalling that the individual mandate was largely a political compromise to garner industry support for consumer protections and for expansion of coverage to those most in need, and does not form the progressive heart of the law.

The truly ominous piece of reasoning in the decision is the basis on which the Court struck down the expansion of Medicaid as written in the Act — which was a key component of the political compromise, necessary to fairly and sustainably extend minimum coverage to those who truly need it. Medicaid is one of many statutory schemes that has federal and state elements – in order to receive federal funding for the program, states must meet certain federal guidelines.

The new law expands the population that States must cover, with the aid of federal financing, to include adults under 65 with incomes up to 133 percent of the federal poverty level. Roberts, along with the dissenting justices who would have struck the entire law, reasoned that the federal government’s method of expanding Medicaid was unduly coercive of the states and violated principles of federalism. In so doing, as Justice Ginsburg pointed out, the Court “for the first time ever – finds an exercise of Congress’ Spending Power unconstitutionally coercive.” (Emphasis original.)

The Court held, essentially, that for the federal government to condition existing fiscal incentives (which it is under no obligation to provide to the states) to influence state social policy was, at least in this case, unconstitutionally coercive.

In its vision, this holding is radically skeptical of the democratically elected federal legislature; in its reasoning, it represents a brand-new expansion of the Court’s power to invalidate acts of that branch; and in its result, the holding is bad and inhumane social policy.

Court Ghosts: And You Thought Obama Had It Tough

Garcetti and Greuel Take the Pledge: No Walmart Money