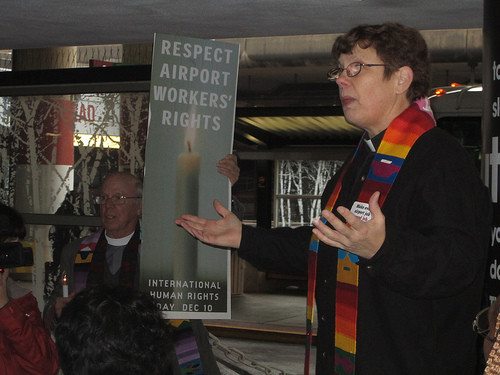 December 12 marked the 65th anniversary of the United Nations’ Universal Declaration of Human Rights. Probably most of us think first of human rights on the political level: the rights of people, especially of political prisoners across the world, to speak, assemble and write, free of government constraint.

In Seattle a group of about 100 workers, community, labor and faith leaders celebrated Human Rights Day at Seattle International Airport (SEATAC) in a different context. We were there in support of airport workers subcontracted by Alaska Airlines, which is based here: baggage handlers, wheelchair operators, cabin cleaners and aircraft fuelers. As we paraded by the Alaska ticket counters we adapted and chanted phrases of the U.N. Declaration: “…May everyone have the right to just wages…May everyone have the right to human dignity.

Socrates, a baggage ramp employee who works for Menzies Aviation, the subcontractor (and a multinational company that contracts with airlines in 29 countries), stood on a two-step ladder in the baggage claim area and spoke to us about fairness and respect.

“I make $9.25 an hour,” he asserted. “Recently, after five years, they gave us just a 25-cent-an-hour wage increase! But workers’ rights are human rights.”

Before he spoke I was asked to bless our gathering. “We affirm that all human rights derive from the hand of the Divine Creator, who created all of us in God’s image,” I prayed. “Today, out of that faith, we underline the words of the United Nations Declaration, that ‘Everyone who works has the right to just and favorable remuneration, ensuring for himself or herself, and his or her family, an existence worthy of human dignity.’”

How do SEATAC’s wages compare with those of other West Coast airports? According to a study by Puget Sound Sage issued this past May, SEATAC’s airport minimum wage, at $9.04 per hour, is the lowest of five airports studied, the highest minimum being at LAX International Airport—$14.97. Meanwhile, Alaska Airlines posted a profit of $244 million in 2011 and boasted a profit margin of 6.6 percent in 2010—the highest of any major U.S. carrier.

The December 12 protest is only the latest in a series of escalating actions by our Seattle coalition that began late last spring. In September, more than 400 of us descended on Alaska’s executive offices, requesting a meeting with CEO Brad Tilden. He refused to meet then, but in early November he and his top executives did meet for more than an hour with a delegation of workers and religious leaders. According to Michael Ramos, executive director of the Church Council of Greater Seattle, management listened attentively but made no commitments other than to acknowledge that Alaska does have the ability to influence its subcontractors.

Finally, a personal note: In Seattle, where my wife and I moved five years ago (to be with children and grandchildren), I found early on that the influence and the learnings spawned by the Los Angeles Alliance for a New Economy (LAANE) were already simmering up here, through Sage and some of the unions! It’s been astounding to feel this—to see the reach and the successes of so much good work in Los Angeles taking root here; including not least work done at LAX, to increase dignity, respect and just family wages there.

And of course our SEATAC coalition is now plotting its next steps!

Dick Gillett is a retired Episcopal priest. He was on the board of directors of LAANE and was a founder of Clergy and Laity United for Economic Justice while he lived in Los Angeles.

AIG Bites the Arm That Fed It