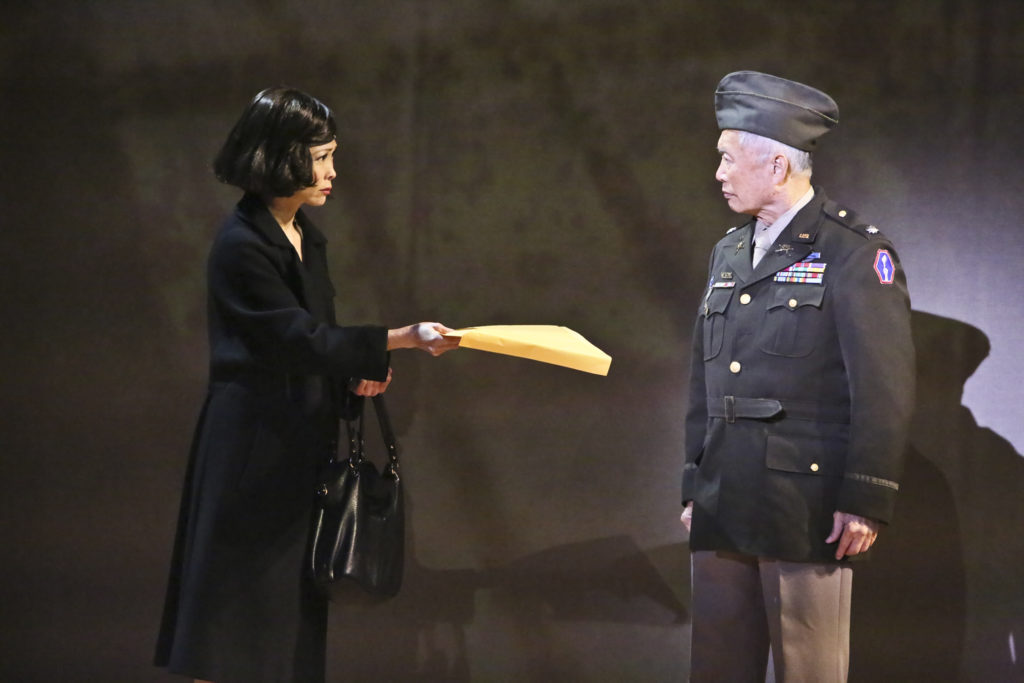 Janelle Dote and George Takei. (All photos by Michael Lamont)

One of the more shameful, racially-motivated episodes in U.S. history, the forced internment of approximately 120,000 people of Japanese descent commenced in February 1942 on the executive order of President Franklin Roosevelt, and only terminated seven months after Japan surrendered and the last of 10 relocation centers shut its gates. 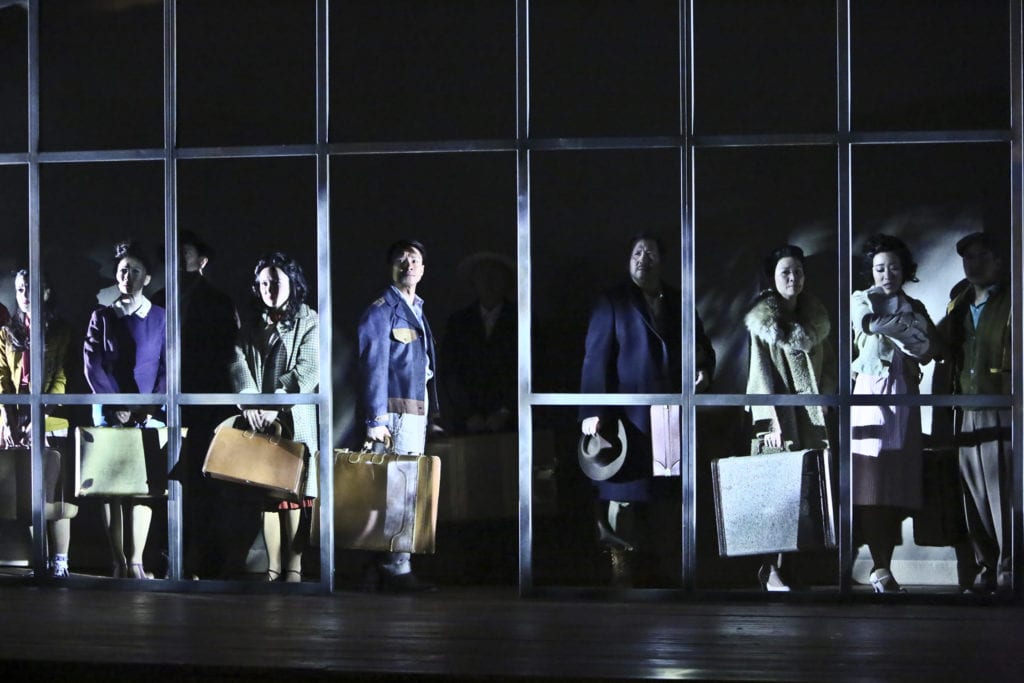 The internees, two-thirds of whom were American citizens, were stripped of their property and dignity, and required to fill out trick questionnaires to assess their loyalty. Failure to comply or give the politically correct response often resulted in imprisonment. Young men of draft age filled out a separate form, indicating whether they were willing to serve in the military — in a segregated unit. Some said yes, others did not. The questionnaire — how to respond and even whether or not to do so — further rent an already divided and disheartened community.

Allegiance aims to recount these injustices, and it does so in a stirring and entertaining way. Directed by Snehal Desai, with music and lyrics by Jay Kuo, and book by Marc Acito, Jay Kuo and Lorenzo Thione, it’s a high-caliber musical melodrama that relays history as it impacts on the fictional Kimura family. Uprooted from their home, re-housed in a barracks-like setting where they are treated like criminals, members of the family are torn further apart when father and son bitterly fall out over whether to pledge loyalty to a government that has stamped them as enemy aliens.

At the top, Takei plays an elderly retired soldier, Sam Kimura, who receives news of the death of his sibling, from whom he’s been estranged for years. That prompts him to recall his youth as the son of a prosperous, widowed farmer (Scott Watanabe) in Salinas, California. Sammy (Ethan Le Phong) is his family’s first college graduate, and dearly beloved by his elder sister Kei (Elena Wang).

The scenario darkens as the family and their neighbors are packed off to Wyoming’s barbed-wired Heart Mountain Relocation Center. Eventually, Sammy joins the army and distinguishes himself in battle, while his future brother-in-law, Frankie (Eymard Cabling), angrily challenges the government and goes to prison. So does Sammy’s dad for his defiant answers to the questionnaire. Father and son never reconcile.

Kuo’s 26 songs are a euphonious mix of ballads, upbeat dance numbers (choreography, Rumi Oyama) with a terrific 1940s swing, and elegiac melodies. Despite the weighty theme, the show’s pace is brisk, as the music sweeps the narrative to its poignant conclusion. The vocals, solo and ensemble, are strong across the board, with Le Phong’s powerful lyric tenor soaring above others, especially in his rendering of the ethically-themed “What Makes A Man.” A live 11-piece orchestra, under the musical direction of Marc Macalintal, lends superlative support throughout.

The non-musical aspects of the performances may not go deep, but like the story they’re telling, they never ring false. Special kudos to Jordan Goodsell, who so effectively portrays every nasty white bully and bigot the targeted Japanese-Americans encounter.