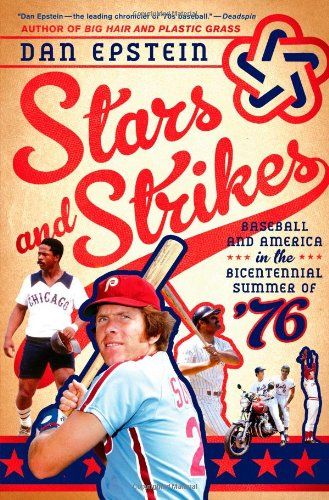 The 1970s are often regarded as a time of false promise (the great broom of Watergate merely clearing the way for Ronald Reagan) or hideous excess (leisure suits, disco, Chrysler LeBarons). Sports writer Dan Epstein sees the Bicentennial decade differently, however. To the author of Big Hair and Plastic Grass, they were nothing less than the end of professional baseball’s innocence. Epstein puts his finger on one year in particular as the turning point for both America’s Pastime and America itself. His new book, Stars and Strikes: Baseball and America in the Bicentennial Summer of ’76, conjures a time and a place where greed, injustice and American piety collided.

Against the backdrop of a newly resurgent New York Yankees team and the juggernaut known as the Big Red Machine, Epstein examines how an increasingly militant baseball players union fought for free agency – a fight that would lead to far-reaching consequences for the game. There were other things happening of course – the Olympics, a presidential election – but for Epstein, the Game’s the Thing. He will read from his book tomorrow and, no doubt, regale listeners with tales of fads, buffoons and hysterias that rival those of today.