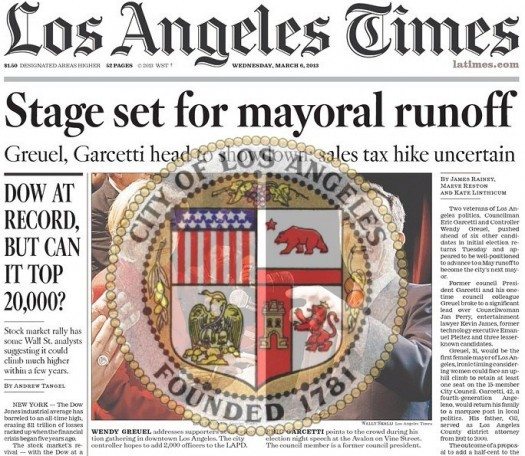 (Raphael “Raphe” Sonenshein is executive director of the Edmund G. “Pat” Brown Institute of Public Affairs and has headed charter-reform and neighborhood council review commissions. A California State University political science professor, Sonenshein is also an author whose books have analyzed racial and reform politics. He spoke to Frying Pan News about what he believes are the biggest tasks facing L.A.’s next mayor – as well as telling reporter Marc Haefele what candidates Eric Garcetti and Wendy Greuel should avoid during the campaign before the May 21 runoff election.)

The next mayor has to reinvent his office as an office of strength, because just being elected doesn’t hand you that. Once you are in you will be dealing with very powerful forces of the community and very powerful forces at City Hall — parties that are not going to step aside just because you have “Mayor” in front of your name. You never know who’s going to be strong in politics, who will be able to say No and make it stick. There is a constant testing of the executive’s ability to make a decision stick. I sense the voters are trying to get which candidate can do these things better. Leadership is the key issue — there aren’t that many differences on the other issues in this race.

One important question is, How can government be relevant to peoples’ lives? Most people in L.A. aren’t remotely aware of the impact of local government — often they aren’t even aware that they live in Los Angeles. They usually don’t know what the mayor and the council do, but one thing they do know is how their neighborhoods look, and what goes on there – from potholes to crime to schools. The one thing government really can do when it works well, is to make a difference to you and me, make our lives safer, healthier, give us greater opportunities. And of course the government ought to make it clear to the people its role in these accomplishments.

I think the new mayor also has to keep in mind that every policy has to be implemented on the street level somewhere. And so, more than a president or a governor, a mayor is likely to see evidence of when a policy isn’t working, because people will take the trouble to come down to City Hall and yell at you. They complain to the press, they complain to the City Council. (I wonder by the way how these state legislators recently elected to the council will deal with that, because they are not used to it.)

The mayor has considerable authority, but he’s not like the mayor of New York, who has phenomenal authority, so one of the big challenges to the mayor of L.A. is to remain relevant to people’s daily lives. And it’s not easy to do, because he spends a lot of time negotiating agreements with powerful forces in and out of government, so it will be easy for him or her to lose touch with the neighborhoods and lose sight of just what the people see from where they are.

The new mayor is also going to find him or herself faced with unanticipated choices. You don’t usually talk about such things when you are running for mayor — why would you? But once you are in office, you realize that everything you chose to do comes at the expense of doing something else: How big the police department is will also ask the question of how big the parks and the libraries ought to be. It’s the job of the candidate to show that he or she can make good choices. But once elected, the mayor has to make those choices.

One thing the next mayor should not do is make pledges — pledges like, “I will never raise taxes.” Supporters want pledges. Candidates shouldn’t make them. They have to trust themselves, trust their own compass. To know what the right thing to do is — and then to do that.